The darker side of man (and woman) is on full display in 1947’s BORN TO KILL. Sex, violence, greed, blackmail, lust, and murder abound in this mean little film. It’s loaded with crackling hard boiled dialogue (example: “You’re the coldest iceberg of a woman I ever saw, with the rottenest insides”) by screenwriters Eve Green and Richard Macauley. BORN TO KILL shows the RKO film noir style at it’s moodiest peak. It’s hard to believe the director is the same man who helmed the sticky sweet Oscar winning THE SOUND OF MUSIC!

Robert Wise got his start in RKO’s sound editing room, graduating to film editor in 1939. He was nominated for Best Editing for Orson Welles’ classic CITIZEN KANE and was soon promoted to the director’s chair, working with producer Val Lewton on psychological horror gems like CURSE OF THE CAT PEOPLE and THE BODY SNATCHER (with the great terror tandem of Karloff and Lugosi). His resume includes bonafide classics like THE DAY THE EARTH STOOD STILL, I WANT TO LIVE!, WEST SIDE STORY, THE HAUNTING, and the aforementioned saga of the Von Trapp Family. But without a shadow of a doubt, his toughest movie is BORN TO KILL. 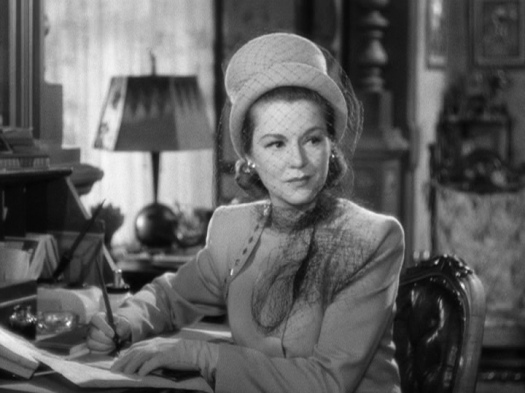 We begin in Reno, where Helen Brent (Claire Trevor) has just obtained a divorce. She’s been staying at a rooming house run by Mrs. Kraft, a blowsy, boozy old coot who lives vicariously through her next door neighbor, loose woman Laury Palmer (an ancestor of TWIN PEAK’s Laura, perhaps?). Laury’s got her eye on a new hunk, and plans on going out with another man to get him jealous. She describes him as “the quiet sort…yet you get the feeling if you step out of line, he’ll kick your teeth in”.

Helen goes to a casino that night and catches the eye of handsome brute Sam Wild (Lawrence Tierney). She bumps into Laury and her date, and Sam’s face turns stone cold. When Laury and the young buck go to her place for a nightcap, Sam is there waiting. He mercilessly beats them both to death. Leaving the house, he sees Helen coming down the street, and ducks into a back alley. Helen notices Laury’s dog wandering outside, and she brings him home, where she discovers the murdered couple. Instead of calling the cops, she calls the train station to buy a ticket back to San Francisco.

Sam goes back to the hotel room he shares with his pal Marty ( Elisha Cook, Jr of THE MALTESE FALCON), and coldly relates the night’s events. Marty tells Sam to high-tail it out of town until the heat dies down. Sam strikes up a conversation with Helen at the railroad station. The two recognize each other from the casino. The sexual tension between them is so thick  you could cut it with a switchblade. When Helen tells him she’s headed back to San Fran, Sam decides that’s where he’s going, too.

Down on his heels private detective Albert Arnett (Walter Slezak) is hired by Mrs. Kraft to investigate the murder of her friend Laury. Arnett’s a verse-spouting weasel looking to make a fast buck off the old dame. He snoops around and spots Marty at various places connected to the crime. When Marty goes to join his pal in San Francisco, Arnett follows. 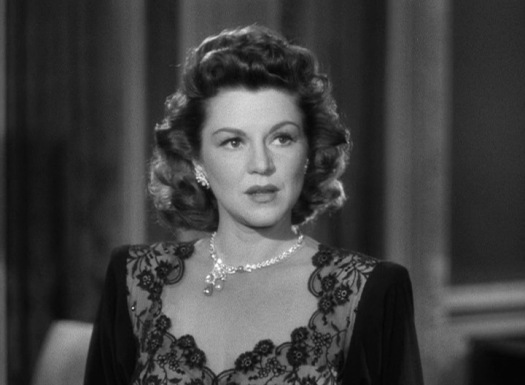 Helen is back home with her rich fiancé Fred and rich step-sister Georgia. She herself doesn’t have a dime, and connives her way through life on their money. Sam drops by Georgia’s mansion, and the four of them go out to a swanky nightclub. Sam sees right through Helen’s façade regarding Fred. When he discovers that Georgia is loaded, he quickly turns his charm on her. Helen sits there seething while Sam and Georgia dance a little TOO close.

Sam and Georgia marry, with Helen as the green-eyed maid of honor. Arnett slips into the wedding party washing dishes for food, and asking a lot of nosy questions about Sam. Helen has him thrown out, and announces to the happy couple she’ll be moving in with a friend. Georgia won’t hear of it, and insists she stay. So does Sam, who’s still hot for his new sister-in-law. While they’re on their honeymoon, Helen meets with Mart, and persuades him to move into his best friend’s new digs.

The honeymoon doesn’t last long, as the couple return arguing about Sam wanting to take over the family newspaper. He’s voted down, and storms out of the room. Later, Helen and Sam meet in the kitchen for  secret rendezvous. She tells him she knows about the killings, which seems to turn them both on. (Helen: “You’re adventure, excitement, depravity. There’s a kind of corruptness inside you”) Mart walks in on them as they lock lips, and Helen leaves the room in silent ecstasy.

She calls Arnett and they clandestinely meet in the shadows of the Golden Gate bridge. She offers him five grand to get off the case, but Arnett, knowing Helen has rich connections, won’t settle for less than fifteen (“Obstructing the wheels of justice is a costly affair”). Helen states she’ll need some time. Meanwhile, drunken old Mrs. Kraft has come to the city for an update. Arnett tells her the trail has gone cold, knowing he can make more by blackmailing Helen, but milks her for expense money anyway.  Mart has followed Arnett to Kraft’s room, and sweet talks her into meeting him later to give her the identity of Laury’s killer. He lays the smooth talk on her and the old sot is willing to take a chance.

Mart confronts Helen at the house, warning her to steer clear of Sam, and she throws him out of her room. Sam spots him coming out, and can barely contain his rage. Mart and Sam discuss what to do about nosy Mrs. Kraft, and the plan is for Mart to kill her. Mart meets her in a deserted part of town and attempts to stab her, but Sam comes up from behind and murders his friend for his perceived betrayal with Helen.

Things get really juicy from there, as Fred dumps Helen, Helen tells Georgia about Sam, the police pound on the door, Sam chases Helen up the stairs, he shoots through the bedroom door at her, the cops blast Sam, and find Helen with a gunshot right in her devious gut. As Arnett is about to leave town, he picks up a newspaper and reads about the grisly demise of Sam and Helen. Shaking his head, he quotes from Provebs 12:15. “The way of the transgressor is hard. More’s the pity, more’s the pity”. 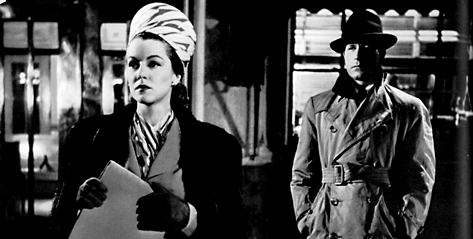 Lawrence Tierney is terrific as the sociopathic Sam. He shot to fame in 1945’s DILLINGER. He had an up and down career, mostly down due to his excesses, but made a small comeback later in life as the boss in Tarantino’s RESERVOIR DOGS, and as Elaine’s father in a hilarious episode of SEINFELD. Claire Trevor was called “Queen of Film Noir” for her roles in MURDER MY SWEET, RAW DEAL, and her Academy Award winning performance in John Huston’s KEY LARGO. BORN TO KILL is filled with great character actors like Cook, Slezak, Esther Howard, Isabel Jewell, and Phillip Terry, and a must see movie for fans of lowdown and dirty film noir at it sleazy best!