TWO ON A GUILLOTINE was one of those movies that used to air frequently on Boston’s Channel 56. I’d seen it numerous times, and had largely forgotten about it when TCM aired it recently. I wondered how it held up after all those decades so, good little film blogger that I am, I DVR’d it to review. While it’s certainly no classic, TWO ON A GUILLOTINE isn’t as bad as the title would imply. 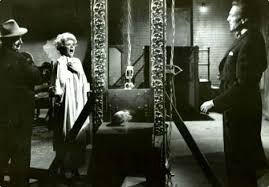 The movie’s about a famous stage magician, The Great Duquense aka Duke (Cesar Romero), who passes away. The papers say he “vows to return from the grave”. His estranged daughter Cassie (Connie Stevens) shows up at the funeral. She’s a dead ringer for her mom, who mysteriously vanished twenty years ago. Duke’s will is read (at the Hollywood Bowl, no less), and Cassie is set to inherit his estate if she’ll stay at his home for seven days, specifically not to leave between midnight and dawn. Val Henderson (Dean Jones), a reporter looking for a story, cons his way into Cassie’s life by pretending to be a real estate agent interested in the house. She finds him “contemptible”. Of course, they quickly fall in love.

The creepy old house is gimmicked up with Duke’s stage props. There’s a lot of strange goings-on involving scary noises, secret locked doors, skeletons popping out of nowhere, and general eerieness. Cassie finds out he’s a reporter, dumps him, then wants him back (your classic boy-meets-girl, boy-loses-girl, boy-regains-girl scenario). There’s some genuinely spooky scenes here, but on the whole it’s more Less Than Grand Guignol. I’ve got to admit the twist ending is pretty neat, though.

The cast is full of familiar actors. Likeable Dean Jones has been a favorite of mine since his Disney days (THAT DARN CAT!, THE UGLY DACHSHUND, THE LOVE BUG), and his presence is always welcome. Connie Stevens wasn’t the best actress, but she wasn’t the worst, either. Cesar Romero gives the part of Duquense his customary pizzazz. Others in the picture include Parley Baer, Virginia Gregg, John Hoyt, Connie Gilchrist, and midget actor Billy Curtis in a small role (sorry, I had to do it!!)

Some of the behind the cameras stuff is more interesting to me than the film itself. Producer/director William Conrad was best known for his two hit TV series, CANNON and JAKE & THE FATMAN. The veteran actor of radio (the original Marshal Dillon on GUNSMOKE), films (THE KILLERS, THE RACKET), and television has a Hitchcockian cameo in this one. Conrad did a lot of TV directing, most notably for 77 SUNSET STRIP. His booming bass voice was often heard narrating movies and shows. (Yes, that’s Conrad narrating the classic animated series ROCKY & BULLWINKLE!) Writer Henry Slesar was an award-winning short-story author who dabbled in TV (ALFRED HITCHCOCK PRESENTS), soap operas (SEARCH FOR TOMORROW, EDGE OF NIGHT), and movies (1971’s MURDERS IN THE RUE MORGUE, with Jason Robards). Slesar even contributed the two-part BATMAN episode featuring Shelley Winters as Ma Parker. And TWO ON A GUILLOTINE was the next-to-last score for composer Max Steiner, who was a long way from GONE WITH THE WIND, KING KONG, CASABLANCA, and THE SEARCHERS.

TWO ON A GUILLOTINE was filmed in black and white. and would’ve benefitted from color. There’s a lot of obvious foreshadowing and it covers all too familiar ground, but it’s not a bad way to spend two hours, and I’m glad I got to see it one more time. Oh….that rock band appearing in the club sequence is The Condors, featuring George and Teddy. They aren’t bad, either. Wonder whatever happened to them?