Marilyn Monroe’s status as America’s #1 Sex Symbol saw her cast in lots of light, fluffy roles during the course of her career. But when given the chance, she proved she was more than just another pretty face. Marilyn’s acting chops shine like a crazy diamond in the 1952 film noir DON’T BOTHER TO KNOCK.

Marilyn plays Nell Forbes, a young woman new to New York. She’s obtained a babysitting job through her uncle, an elevator operator at a ritzy hotel. Nell’s an attractive woman, but right from the start we can tell there’s something slightly off about her. She seems haunted, her voice and mannerisms have a wounded quality. After putting her little charge Bunny to bed, Nell begins trying on the mother’s jewelry and kimono. She goes to the window when she hears a plane fly by, strangely attracted to the sound. 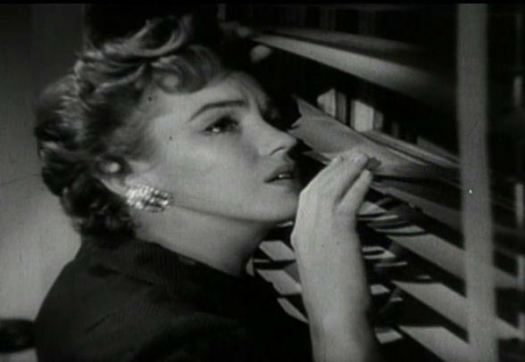 In the hotel lounge, singer Lyn Leslie has broke off her relationship with pilot Jed Towers. Lyn wants more than Jed’s willing to give. Jed is a commitaphobe, the kind of guy who wants to have his cake and eat it, too. She calls him cold and callous, and she’s right. Jed’s a humorless, uptight male, and a bit of a prick. He goes to his room to drink alone, when he spies Nell across the way. Feeling frisky, Jed calls the room and strikes up a conversation, finally wrangling an invitation from her. As Nell applies lipstick, we see the scars on her wrists from an apparent suicide attempt. Jed goes over, and Nell tries to act sophisticated. She becomes infatuated when he tells her he’s a pilot. Bunny wakes up ,and Nell’s ruse is spoiled.

Things go steadily downhill, as Jed leaves, and Nell becomes more and more unhinged. Her boyfriend had been a pilot that was killed on a flight to Hawaii. The suicide attempt led her to three years in an institution, and we discover she’s only recently been released. Nell’s tenuous hold on reality comes crashing down after Jed rebuffs her, and the film kicks into high gear as Nell sinks deeper and deeper into her madness. 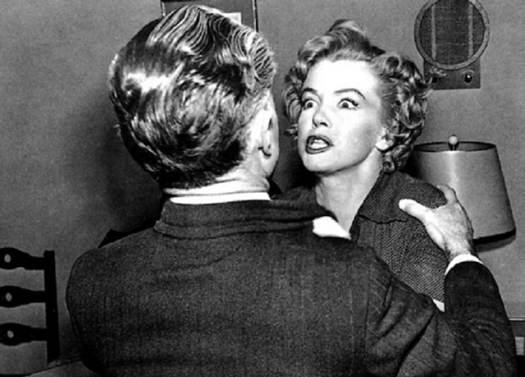 I won’t spoil the movie for those of you who haven’t seen it. Instead, I’ll just tell you Marilyn Monroe is outstanding as Nell. Her vulnerable qualities at the film’s beginning give way to a creepy yet heartbreaking performance that has to be seen to be truly appreciated. Nell is in turn clingy, violent, a practiced liar, and ultimately pitiable. Her loose grip on reality, coupled with her obvious bipolar traits, make Nell a danger to both herself and those around her. It’s a bravura showcase for Marilyn, one she rarely got, and she takes the ball and runs with it as the tragic Nell.

Richard Widmark (The Swarm) is unlikable at first as Jed, but softens during the events of the movie. It’s a tricky role, but Widmark pulls it off. His ex-girlfriend Lyn is played by Anne Bancroft in her film debut. Elisha Cook Jr (Born to Kill, Blacula) is back in noir territory as Nell’s Uncle Eddie, giving another fine performance. The supporting cast features Jim Backus, Lurene Tuttle, Verna Felton, Don Beddoe (The Face Behind The Mask), and Donna Corcoran as Bunny. British director Roy Ward Baker is better known for his Hammer horrors (THE VAMPIRE LOVERS, SCARS OF DRACULA, DR. JEKYLL & SISTER HYDE) than film noir, but does a good job leading the cast through a solid script by David Taradash (Oscar winner for FROM HERE TO ETERNITY), based on the novel Mischief  by mystery writer Charlotte Armstrong.

But it’s Marilyn Monroe’s show all the way. DON’T BOTHER TO KNOCK is, along with 1953’s NIAGRA and 1960’s THE MISFITS, a chance to see her in a rare dramatic role. As much as I love her in musicals and comedies, I admire her even more in films that show her depth as an artist. It’s no wonder that, over fifty years after her untimely death, Marilyn is still popular from one generation to the next. She was THAT talented, and DON’T BOTHER TO KNOCK is a must-see for fans of both her and the film noir genre.