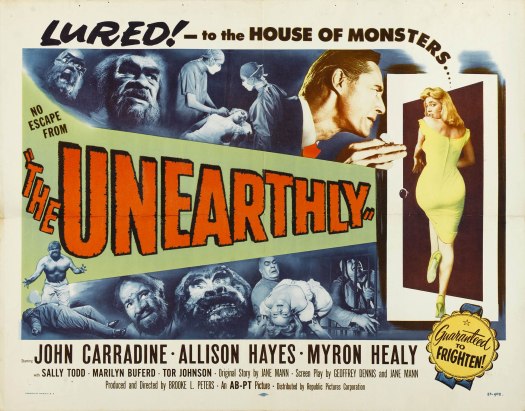 John Carradine hams it up as mad scientist Dr. Charles Conway in THE UNEARTHLY. The actor gave fine performances in first rate productions like THE PRISONER OF SHARK ISLAND and THE GRAPES OF WRATH, but by the 1940s,he took anything offered him, mostly B- horror and Western films. One thing you can say about Carradine: he was never boring. The movies might have sucked, but ol’ John put his melodramatic stamp on every one of them. 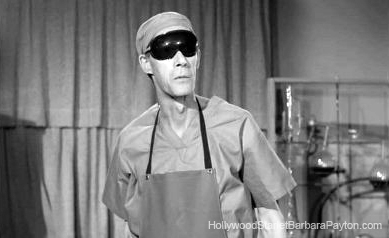 Lovely Grace Thomas is brought to Dr. Conway’s sanitarium by her psychiatrist, Dr. Wright. But there’s something fishy going on here! Wright has been bringing patients to Conway so he can conduct his bizarre “glandular experiments”. Conway’s latest victim, Harry Jedloe, has become a zombie-like horror in a catatonic state. The good doctor’s giant servant, Lobo, is another unfortunate result of Conway’s experiments. Lobo is played by Swedish wrestler turned horror icon Tor Johnson. Tor was a 300 lb. bald hulk who couldn’t act, but whose look was perfect for low-grade schlock like this. The character Lobo first appeared in Ed Wood’s BRIDE OF THE MONSTER starring Bela Lugosi. Tor also played Inspector Clay in Wood’s messterpiece, PLAN 9 FROM OUTER SPACE. 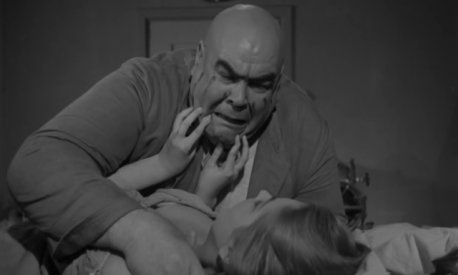 Lobo finds a man sneaking around the grounds, and drags him to Dr. Conway. The man calls himself Mark Houston, but Conway has seen a police bulletin on him. He’s really Frank Scott, wanted for murder. Conway offers Houston sanctuary in exchange for becoming a guinea pig in the doctor’s experiments, which involves planting a “17th gland” in the subject, giving him eternal life and youth. Next day we meet the other patients. There’s beautiful Natalie and anxiety-ridden Danny. There’s also Conway’s lab assistant Sharon, who’s jealous of Grace and secretly in love with the doctor. After dinner, Conway regales the patients with his virtuoso organ playing while Lobo abducts Natalie from her room. The deranged medico does his glandular thing, which once again fails, with horrifying results for poor Natalie. 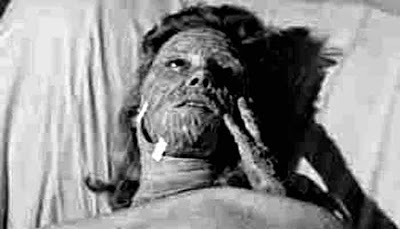 Houston warns Grace and Danny they’re in danger, and the trio plots an escape. But Conway catches them and throws the men in a cell with Lobo, while Grace is reserved for the gland transplant. The guys outwit dim-witted Lobo, with Danny giving his life. Houston confronts Conway and reveals he’s not a killer, but an undercover cop! Conway eludes him, only to be caught by the thought-dead Jedloe, who sticks a knife in the madman’s gut. The police arrive, and find a cell filled with more of Conway’s mutated monsters. 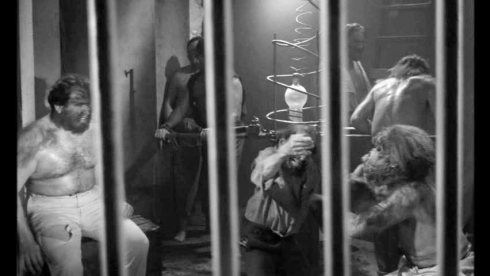 Sounds thrilling, no? It’s really not, except for over-the-top Carradine and fans of Tor Johnson. THE UNEARTHLY was the brainchild of one Brooke L. Peters, aka Boris Petroff. Petroff was an exploitation veteran responsible for silliness like ANATOMY OF A PSYCHO (1961) and SHOTGUN WEDDING (1963), a Hillbilly effort with screenplay by none other than Ed Wood himself. Cowriter of this one Geoffrey Dennis was a pseudonym for John D.F. Black, penner of Blaxploitation flicks SHAFT and TROUBLE MAN. The cast features Allison Hayes (Grace), the one-and-only star of ATTACK OF THE 50-FT WOMAN. Myron Healey (Houston) was a good actor who mostly played Western heavies. Marilyn Buferd’s (Sharon) claim to fame was as Miss America 1946. Arthur Batanides (Danny) was a well-regarded character actor known for his role as Mr. Kirkland in the POLICE ACADEMY series. And Sally Todd (Natalie), besides appearing in FRANKENSTEIN’S DAUGHTER (1959), was Playboy’s Playmate of the Month for February 1957!

THE UNEARTHLY is harmless 50s fun, with Carradine at his overacting best. And now, I’ll let Tor Johnson have the last word:

6 Replies to “Halloween Havoc!: John Carradine in THE UNEARTHLY (Republic 1957)”