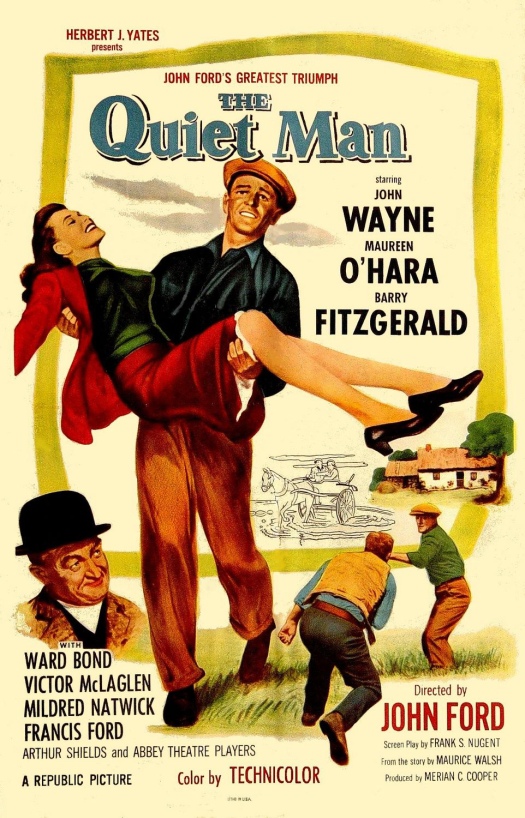 With the passing of screen legend Maureen O’Hara today, I’ve decided to put aside my Halloween Havoc! series this evening to take a look at one of my favorite Maureen movies, THE QUIET MAN. Paired once again with John Wayne and director John Ford, Maureen shines as Mary Kate Danneher, a feisty, hot tempered colleen who refuses to honor her marriage vows until she gets her “fortune” from brutish brother Red Will Danneher (perennial big lug Victor McLaglen). Mostly filmed in Ireland by Winton Hoch, the countryside scenery is breathtaking in vivid Technicolor, with Maureen radiant as ever. 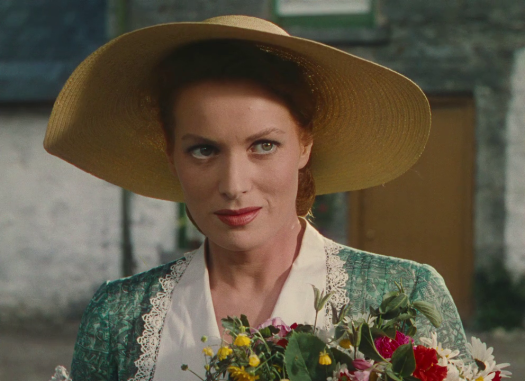 The story concerns American ex-boxer Sean Thornton (Wayne), returning to his Emerald Isle birthplace of Innisfree after accidentally killing an opponent in the ring. When he first sets eyes on Mary Kate herding sheep, he’s immediately smitten. Sean buys his family homestead from the Widow Tillane (Mildred Natwick), outbidding Danneher, who knows how to hold a grudge (he has his flunky Feeny write every slight down in a notebook). Sean wants to wed Mary Kate but Will holds back his consent, a custom Sean’s not too fond of, so the locals convince Danneher that Widow Tillane will marry him if he gets Mary Kate out of the house. Sean and Mary Kate get hitched, but when Danneher finds out he’s been duped, he withholds his sister’s “fortune”, consisting of furniture, fine china, and 350 pounds in gold. Mary Kate won’t consummate the marriage without her fortune, and thinks Sean’s a coward for not demanding it from her brother. When she finally gives in, and Sean still refuses to fight for her dowry, she leaves him, heading for the train to Dublin. Having had enough, Sean retrieves her then drags her to Danneher, followed by the whole town. Danneher gives up the money, and the couple throw it in the incinerator, infuriating Red Will. The two finally get into a rollicking fight (one of the longest in screen history, lasting nearly ten minutes) and Sean emerges victorious. The two brothers-in-law, now totally soused, march to the Thornton cottage singing “The Wild Colonial Boy”, and Sean and Mary Kate live happily ever after in this cleverly crafted Irish fairy tale

There are so many great scenes in this film, including that now-classic battle royal. Sean and Mary Kate escaping their chaperone Micheline (the one and only Barry Fitzgerald), running through lush green fields and getting caught in a rainstorm, is one of the most romantic in movies. Ford won his fourth and final Oscar for directing this gem, and Hoch took home the statue for his cinematography. The score by Victor Young, peppered with Irish folk tunes, should’ve won (Dmitri Tiompkin got the win for HIGH NOON). The cast is perfect, with Duke giving a restrained performance as the ex-patriate. McLaglen is his boisterous self as Danneher, Fitzgerald plays his role like a leprauchan, and the rest of the ensemble (Ward Bond, Arthur Shields, Jack MacGowan, Sean McClory) add to the authenticity. THE QUIET MAN is somewhat of a family affair, with director Ford’s brother Francis taking part, Wayne’s children featured in the horseracing segment, and Maureen’s brothers Charles Fitzsimons and James O’Hara in supporting roles. 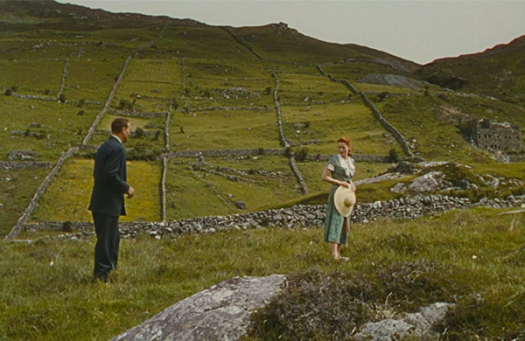 Maureen O’Hara herself is marvelous as the coquettish yet headstrong Mary Kate, a role made for her talents. She was never lovelier than in THE QUIET MAN, even more so in gorgeous Technicolor. This is one of my favorite films, and no one else could’ve played Mary Kate but Maureen O’Hara. The woman is gone now, but her movies will live on for as long as there are classic film lovers, and we pass them down to the next generation. Here’s to you, Maureen:

“May your glass be ever full – May the roof over your head ever be strong – And may you be in heaven half an hour before the devil knows you’re dead!”