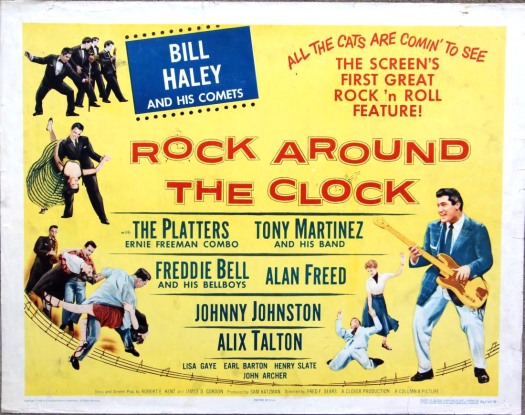 I’m kicking off this new series on the marriage of rock’n’roll music and film with what many believe is “the first rock’n’roll movie”, 1956’s ROCK AROUND THE CLOCK. The title tune was used in the opening credits of 1955’s THE BLACKBOARD JUNGLE and caused teen fans to riot in theaters upon hearing that Big Beat. Producer Sam Katzman, always ready to jump on the latest bandwagon, put this quickie together and had a box-office smash on his hands. Adults were perplexed, but teenagers stormed theaters in droves, eager to plunk down their hard-earned cash to get a glimpse of rockers Bill Haley and His Comets, The Platters, and other hitmakers of the era. 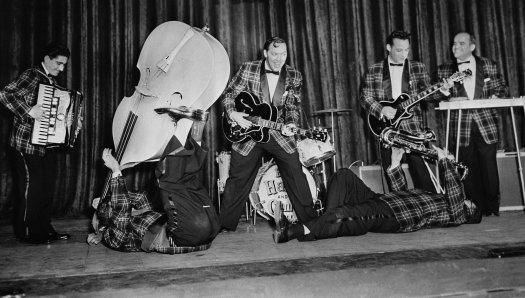 The plot is virtually non-existent: band manager Steve Hollis and his sidekick Corny, tired of the dead big-band scene, make their way to New York to seek work with Corrine Talbot’s talent agency. Stopping in small town Strawberry Springs, they notice hordes of young people heading to the Saturday night dance. They discover Bill Haley and His Comets rocking out to “See Ya Later, Alligator”,  with everyone dancing up a storm. Corny asks a youngster what this strange music is called, and she exuberantly replies, “It’s rock and roll, brother, and we’re rocking tonight!” The dance floor clears when brother and sister duo Lisa and Jimmy Johns hit it for “Rock a Beatin’ Boogie”. The team’s played by Lisa Gaye and Earl Barton and hey, they’re pretty damn good:

Steve and Lisa fall in love, much to Corrine’s chagrin. She spends the rest of the film trying to put the kibosh on the romance. But ROCK AROUND THE CLOCK isn’t about plot, it’s about the new (at the time) artform called rock’roll. Besides Haley and his band (who’d soon be replaced as Rock King by some guy named Elvis), you’ll see doo-wop greats The Platters doing their hits “Only You” and “The Great Pretender”, the energetic Freddie Bell and the Bell Boys, and Latin jazz combo Tony Martinez and his Mambo Band (Martinez would later play Pepino in TV’s long running THE REAL MCCOYS, starring Walter Brennan). Legendary DJ Alan Freed also appears as himself in the film. It’s a bit cornball today, but as a time capsule to a more innocent era, it’s highly enjoyable. You’ll dig all the crazy hep talk, Daddy-O, and your feet won’t stop tapping while watching ROCK AROUND THE CLOCK. So don’t be a square, man, grab your honey and get rockin’!