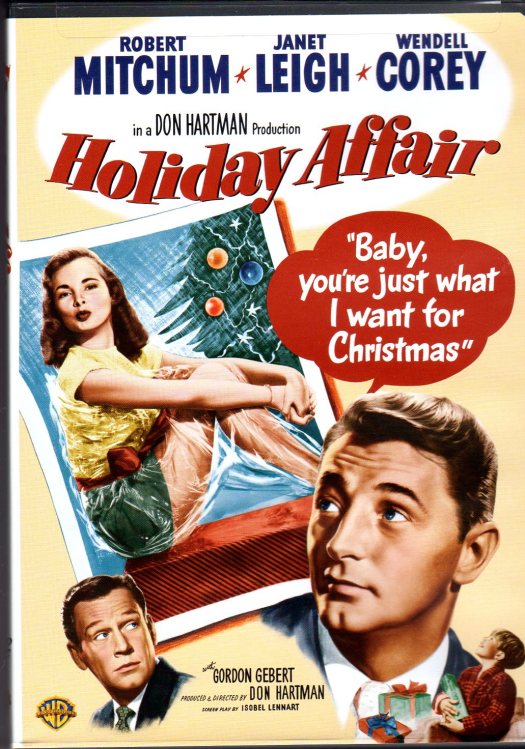 On September 1, 1948, movie star Robert Mitchum went to a house party with an acquaintance and two young women. The quartet was raided by LA police and arrested for possession of marijuana.  Local cops were out to clean up the Hollywood “dope scene”, and Mitchum was used to set an example. Sentenced to 60 days in jail, Mitchum and his bosses at RKO figured his career was over. But during all this hubbub, the studio reluctantly released RACHEL AND THE STRANGER, a Western with Loretta Young and William Holden that Mitchum finished before the bust. It was a hit with audiences, who cheered at the sight of the laconic pothead on-screen! Mitchum did his time, then went on to make THE BIG STEAL with his Out of the Past costar Jane Greer. It looked like all was forgiven, but RKO was still unsure, and tried to soften Mitchum’s image by casting him in the Christmas themed romantic comedy HOLIDAY AFFAIR. 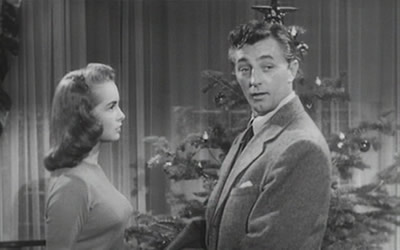 This lightweight holiday tale has Mitchum playing Steve Mason, an idealistic dreamer who we find selling toy trains at a large department store in New York City. Pretty young Connie Ennis (a 22-year-old Janet Leigh) pushes her way through the crowd to buy a train set for her son. She’s really a “comparison shopper” working for a rival store, and Steve sees through her right off the bat. She brings the train set home, to return tomorrow, but her precocious 6-year-old son Timmy (Gordon Gebert) peeks inside the box and thinks it’s for him. When she returns it the next day, Steve is supposed to turn her in for being a spy. But after they talk, he has a change of heart and lets her go, causing him to get fired. 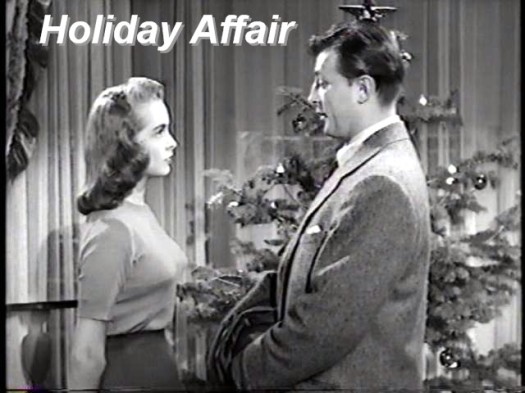 Connie’s a war widow dating lawyer Carl Davis (Wendell Corey), a practical guy who wants to settle down. Timmy’s not too crazy about Carl, at one point kicking him in the shins and saying, “You’re not my father!” Carl and Steve become rivals for Connie’s affections, and complications arise. But it’s all pretty harmless, and you know from the get-go Janet’s going to wind up choosing Mitchum over boring Wendell Corey, who’s got all the charisma of a doormat. HOLIDAY AFFAIR will make you smile, but it’s not laugh-out-loud funny. There’s some good moments, and it’s a rare chance to see Mitchum do romantic comedy, but this isn’t a can’t miss film. In fact, it didn’t do well at the box office,  and RKO put Bob back in noir territory with his next film, Where Danger Lives. It’s only when HOLIDAY AFFAIR began showing on television that it developed a devoted following.

Young Janet Leigh is lovely to look at, and showed glimpses of better things to come. I never cared that much for Wendell Corey, who seemed stiff and boring in most of the roles I’ve seen him in. He’s stiff and boring here, too. But little Gordon Gebert is swell as Timmy, a natural child actor who actually acts like a child. Harry Morgan (billed as Henry) has a small part as an exasperated cop, and gives the scene he’s in a boost. Director Don Hartman was primarily a comedy writer, with credits including some Hope and Crosby “Road” trips and two Danny Kaye vehicles (WONDER MAN, THE KID FROM BROOKLYN). Screenwriter Isobel Lennert was responsible for films like ANCHORS AWEIGH and EAST SIDE WEST SIDE. After being sidetracked by the House Un-American Activities committee (where she named names), Miss Lennert continued her career with PLEASE DON’T EAT THE DAISIES and FUNNY GIRL. 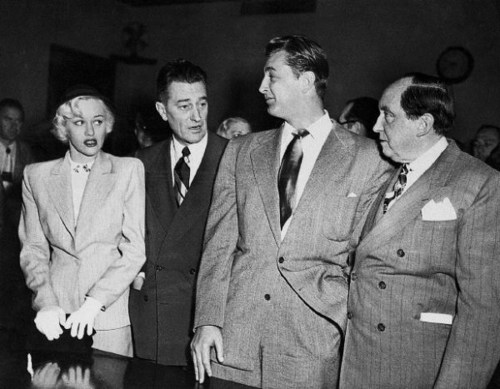 Robert Mitchum went on to a long and successful film career after his marijuana arrest and incarceration. Photos from the pot trial show Mitchum with co-defendant Lila Leeds, a 20-year-old bit player married to Lana Turner’s ex. Miss Leeds also did sixty days in stir, and upon release she chose to star in something called I SHOULDA SAID NO! (aka WILD WEED), an exploitation movie along the lines of REEFER MADNESS. The film, and the pot bust publicity, did nothing to further her acting career, and she tumbled into a cycle of more arrests, heroin addiction, and prostitution. Lila Leeds eventually found religion, and volunteered at local missions in LA. She died in obscurity in 1999.