MAKE ME A STAR is an odd Pre Code film unsure what it wants to be. It starts off as a comedy about a movie-mad country bumpkin named Merton (Stuart Erwin) in the small town of Simsbury who dreams of becoming a cowboy star like his idol, Buck Benson (George Templeton). He’s even studying to become a thespian by listening to recordings from the National Correspondence Academy of Acting. Town busybody Mrs. Scudder (Zasu Pitts)  complains about Merton’s absent-mindedness to his boss, general store owner Gashwiler (Charles Sellon). Merton has a supportive friend, Tessie (Helen Jerome Eddy) who helps him set up a photo-shoot. But things go awry when Merton, dressed in full cowboy regalia, loses control of Gashwiler’s horse, causing a ruckus in the town square. Gashwiler fires Merton, and the starry-eyed yokel takes a train to Hollywood.

The film veers off into drama from here, as Merton tries to crash the movies, without success. Comic actress Flips Montague (Joan Blondell) feels sorry for the rube, and wrangles him an extra role in a Buck Benson production. But the talentless Merton promptly blows his one line and is fired from the set. Dejected and broke, he hides out on the studio lot, where Flips finds him living days later, hungry and disheveled. She buys him breakfast and tells him to forget his dreams (“You haven’t got a Chinaman’s chance”), offering him train fare back to Simsbury.  He politely refuses, determined to make it in Hollywood.

Flips takes him to see her director Jeff Baird (Sam Hardy) and comes up with a plan to star Merton in a Buck Benson parody. The two don’t tell him it’s a farce though, because Merton abhors slapstick, thinking it’s degrading to the noble art of acting. While Merton (acting under the moniker Whoop Ryder) plays it straight, he’s surrounded by Baird’s comedy stars (veterans Ben Turpin, Snub Pollard, and Bud Jamison) hamming it up. The movie’s then gimmicked up in post-production with comic sound effects, sped-up action, and a high-pitched voice for Merton. When the finished product “Wide Open Spaces” is previewed, the audience howls with laughter. Poor Merton is mortified, and is ready to give up show business. He goes to see Flips one last time, who’s taken a shine to the boy, and feels terrible about the whole mess. Merton breaks down and cries, cradled in Flips’ arms in a real downbeat ending.

MAKE ME A STAR was based on a novel by Harry Leon Wilson and stage play by George S. Kaufman and Marc Connelly. It was originally filmed as MERTON OF THE MOVIES in a 1924 silent version, and remade again as a Red Skelton vehicle in 1947 under the same name. The director of MAKE ME A STAR was William Beaudine, who shows great restraint with the material, not letting things get too maudlin. Beaudine had been around since the dawn of Hollywood, and could make a good picture when given the opportunity. Unfortunately, he somehow became stuck on Poverty Row during the 1930’s and cranked out hundreds of Grade B and lower potboilers for studios like Monogram, PRC, and the indies for the next thirty years, earning the nickname “One Shot” for bringing ’em in quick and cheap. MAKE ME A STAR allows Beaudine a chance to show he had talent, and his fate as a low-budget maestro wasn’t fully deserved. 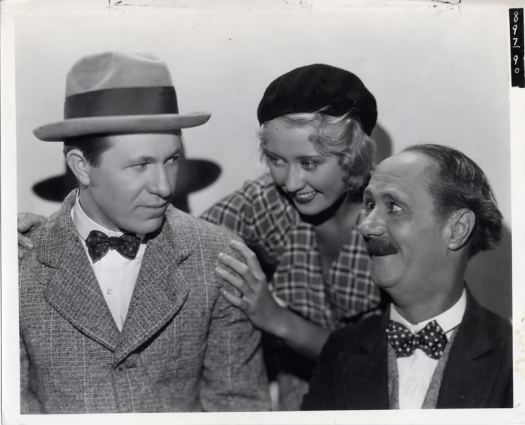 Stuart Erwin has never been one of my favorites. He’s clearly going for pathos, but comes off as just pathetic. Merton’s such a dimwit it’s hard to muster any sympathy for him. Joan Blondell plays her usual tough dame with a heart of gold  who’s seen it all. In the hands of a lesser actress, the improbable budding romance between Flips and Merton would be unbelievable, but Blondell’s talent somehow makes it work, despite Erwin. She’s the glue that holds the latter half of this schizophrenic film together.

The most interesting thing about MAKE ME A STAR is the cameos by some of Paramount’s brightest stars of the day. Pay attention and you’ll see Tallulah Bankhead, Maurice Chevalier, Claudette Colbert, Gary Cooper, Fredric March, Jack Oakie, Charlie Ruggles, and Sylvia Sidney parade across the screen in quick bits. This alone makes the film worth a look, but ultimately it’s a disappointment.  Aficionados of early 30’s Hollywood will want to see it; if that’s not you, don’t bother.