I’ll be live tweeting the Academy Awards show tonight. Join me at @gary_loggins if you’re on Twitter! #Oscars2016 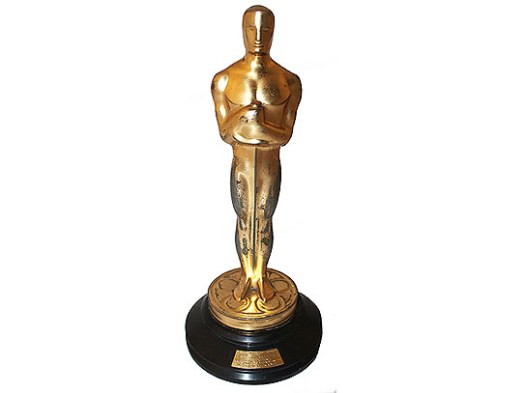 Watching movies, like appreciating any art form, is a purely subjective experience. My idea of a great film could be your idea of a stinkeroo. After all, my two favorite directors are John Ford and Ed Wood! Keeping that in mind, I’ve decided to do something different here. Since I’ve viewed 61 of the 87 Best Picture winners, I’ve come up with a Top Ten list of the all-time best Best Pictures I’ve seen. And here it is:

And there you have it. Honorable mentions would go to GRAND HOTEL, THE BEST YEARS OF OUR LIVES, BEN-HUR, THE SOUND OF MUSIC (yeah, I’m a sentimentalist), THE GODFATHER PART II, ROCKY, ANNIE HALL, FORREST GUMP, THE FRENCH CONNECTION, MILLION DOLLAR BABY, and NO COUNTRY FOR OLD MEN. So how about you, Dear Readers? Agree? Disagree? Would you add or subtract any from your own personal Top Ten lists? I’d love to hear your reactions, so feel free to comment away! 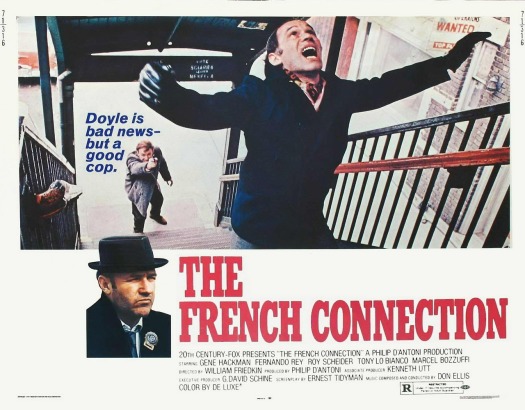 First of all, I’d like to thank Kellee Pratt of Outspoken and Freckled for inviting me to participate in the 31Days of Oscar Blogathon. It’s cool to be part of the film blogging community, and even cooler because I get to write about THE FRENCH CONNECTION, a groundbreaking movie in many ways. It was the first R-Rated film to win the Academy Award for Best Picture, and scored four other golden statuettes as well. It also helped (along with the Clint Eastwood/Don Siegel DIRTY HARRY) usher in the 70’s “tough cop” genre, which in turn spawned the proliferation of all those 70’s cop shows that dominated network TV back then (KOJAK, STARSKY & HUTCH, BARETTA, etc, etc).

The story follows New York City cops Jimmy “Popeye” Doyle and his partner Sonny “Cloudy” Russo as they investigate a large shipment of heroin being brought in from France. The detectives focus on Sal Boca, a small time hood suddenly spreading big money around, and connected to mob lawyer Joe Weinstock. They get a tip the drugs are coming in, and follow Frenchman Alain Charnier. The cat-and-mouse game is on, and the film essentially becomes the race to find and stop the shipment from hitting the streets, including an iconic scene where Doyle commandeers a car to chase down an elevated train carrying Charnier’s murderous associate.

Gene Hackman won the Oscar for his portrayal of Popeye Doyle. He’s Archie Bunker with a badge, spewing profanity-laced ethnic slurs at every perp he comes across, tossing in non-sequiturs like “You ever pick your feet in Poughkeepsie?” to keep them off-balance. Doyle breaks the rules with abandon, doing whatever it takes to clean up his city. Popeye Doyle may be a flawed human being, and you may not agree with his methods, but he’s an honest cop doing a tough job. He’s an anti-hero, and Hackman deserved his Oscar for his stark, realistic performance.

The rest of the cast is outstanding as well. Co-star Roy Scheider (Russo) went on to lead roles in JAWS, ALL THAT JAZZ, BLUE THUNDER, and 2010. Spanish actor Fernando Rey (Charnier) worked in many of Luis Bunuel’s films. Tony LoBianco (Sal) is a dependable character actor who never quite made the leap to stardom. The real life Popeye and Cloudy, Eddie Egan and Sonny Grosso, appear in the film, with Egan playing Doyle’s superior. R&B group The Three Degrees (“When Will I See You Again”) are featured in the nightclub scene.

William Friedkin’s career was stuck in neutral before THE FRENCH CONNECTION. He made his debut directing Sonny & Cher in GOOD TIMES, followed by a few artsy films that went nowhere at the box office. He took on THE FRENCH CONNECTION after getting some advice from his then-girlfriend’s father. You may have heard of him… Howard Hawks. Friedkin’s direction here is like Hawks-on-steroids, and nabbed him an Oscar as well. His next movie was an even bigger blockbuster, 1973’s THE EXORCIST. Friedkin’s other films have been uneven; some of his better ones are SORCERER, THE BRINK’S JOB, and TO LIVE AND DIE IN L.A. (a personal favorite of mine). 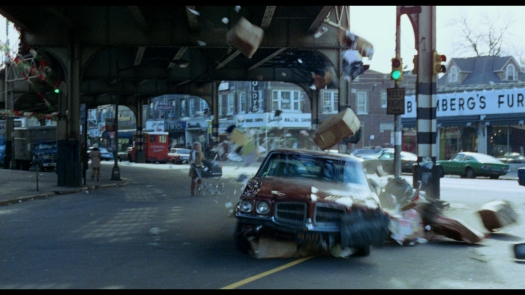 Bill Hickman has a part as Mulderig, a Federal agent at odds with Doyle. Hickman was primarily a stunt driver, noted for the chase through San Francisco in Steve McQueen’s BULLITT. He staged the chase here as well, filmed on the streets of Brooklyn. It’s a crazy, tense thrill ride that ranks with the screen’s best chases, and part of the reason DP Owen Roisman and editor Gerald Greenburg took home Oscars, too. Let’s not forget the gritty screenplay by Ernest Tidyman, which gave THE FRENCH CONNECTION five Academy Awards all totaled.

THE FRENCH CONNECTION is a hard, in-your-face movie that helped Oscar grow up, with a remarkable performance by Gene Hackman as Popeye Doyle, a character who was a product of his time. It’s one of the best crime films of the 70’s, and still holds up well, unlike some other cop movies of the era. Just writing this review makes me want to watch it again! 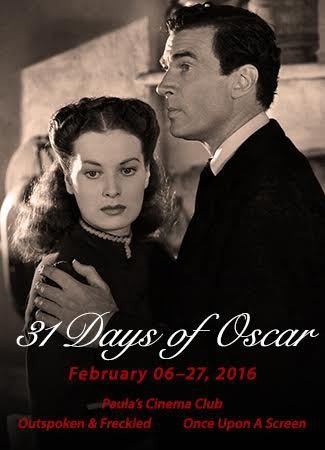 I’ve been away a few days due to Internet problems. But now I’m back online, and will be posting my review of THE FRENCH CONNECTION later this evening!

Also, I discovered that while I was away, Cracked Rear Viewer reached the 200 follower mark!! Thanks to one and all who read my movie musings. Cheers! 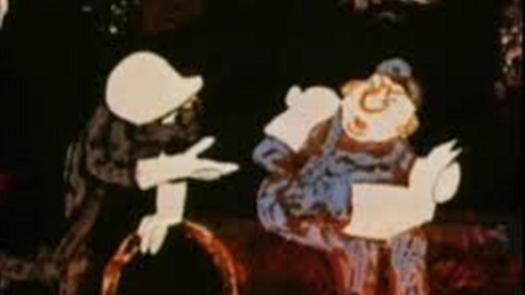 Since it’s Oscar week, I thought I’d dig up something a little different. THE HOLE won the 1962 Academy Award for Best Animated Short. Made by ex-Disney animator (and creator of Mr. Magoo) John Hubley and his wife Faith, it’s a short tale of two construction workers discussing the nuclear threat (and foreign waltzes, among other things!). Voiced by actor George Mathews and jazz trumpeter Dizzy Gillespie, here’s THE HOLE: 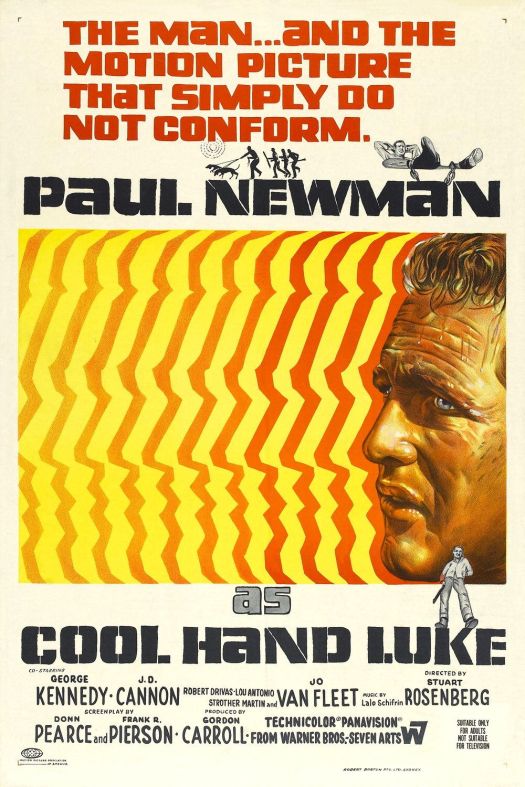 The Sixties was the decade of the rebellious anti-hero. The times they were a-changin’ and movies reflected the anti-establishment mood with BONNIE & CLYDE, EASY RIDER, and COOL HAND LUKE. Paul Newman starred as white-trash outsider Luke Jackson, but it was his co-star George Kennedy who took home the Oscar for his role as Dragline, the king of the cons who first despises then idolizes Luke.

War vet Luke gets busted for “malicious destruction of municipal property while drunk”, and sent to a prison farm in Florida. The non-conformist Luke butts heads with both the “bosses” (prison guards aka authority) and Dragline, a near illiterate convict who runs the yard. Dragline and Luke decide to settle their differences in a Saturday boxing match. The hulking Dragline beats the shit out of Luke, but the smaller man keeps getting up for more. Dragline finally walks away, and Luke earns both his and the other con’s respect. Luke gets a visit from his mom Arletta (Oscar winner Jo Van Fleet of EAST OF EDEN), who’s dying and wants to see him one more time. This poignant scene is one of the best as Luke and Arletta discuss his upbringing, and we can see despite the hardships endured in their lives, there’s a strong loving bond between mother and son. The scene’s done without any maudlin Hollywood bullshit, and well handled by Newman, Van Fleet, and director Stuart Rosenberg. 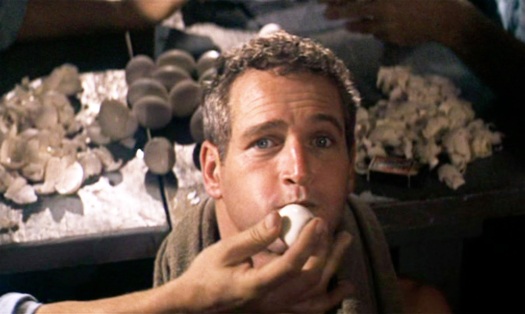 Then there’s the memorable egg-eating contest, where Luke bets he can eat fifty hard-boiled eggs in an hour. Dragline backs his play, and the prisoners all put up their money as Luke devours egg after egg, winning the bet in a funny scene. The shot of him lying on the table, surrounded by eggshells, in a crucifixion pose is one of many Christ-like tableaux featuring Luke throughout the film. It gets a little heavy-handed, but it works in this case. Luke gets word his mother has died, and he’s not allowed to attend the funeral. He’s put in “The Box” (a sweltering shed the size of an outhouse) so he doesn’t get “rabbit blood” and try to escape. This only triggers his thirst for freedom, and he attempts a series of escapes, each time getting caught. The punishments get brutaler and brutaler but Luke’s indomitable spirit keeps him going until the tragic end.

Newman and Kennedy head up a great cast,with Strother Martin (“What we have here is failure to communicate”) as The Captain leading guards Morgan Woodward, Luke Askew, and Robert Donner. The cons are played by J.D. Cannon, Wayne Rogers, Dennis Hopper, Ralph Waite, Harry Dean Stanton, and Joe Don Baker, among others. Then there’s Joy Harmon in a brief bit as a local lass washing her car on a hot Florida afternoon. She knows the men on the road gang are watching her, and she’s obviously getting off on turning them on:

Stuart Rosenberg began his directing career in the 50’s with the syndicated series DECOY, starring Beverly Garland as a female cop. He moved on to THE NAKED CITY, THE UNTOUCHABLES, ALFRED HITCHCOCK PRESENTS, and THE TWILIGHT ZONE before COOL HAND LUKE, his first feature. Rosenberg was a talented director who wasn’t very prolific, but the films he did make were well done. He worked with Newman in three more movies (WUSA, POCKET MONEY, THE DROWNING POOL) and also did LOVE & BULLETS (with Charles Bronson), THE (original) AMITYVILLE HORROR, THE POPE OF GREENWICH VILLAGE, and another prison drama, BRUBAKER, starring Newman’s pal Robert Redford.

As for Oscar winner Kennedy, COOL HAND LUKE made him a star after years of hard work in small roles. Kennedy was featured in all the AIRPORT and NAKED GUN movies, and had roles in THE DIRTY DOZEN, BANDOLERO!, FOOL’S PARADE, CAHILL US MARSHAL, and THUNDERBOLT AND LIGHTFOOT. He starred in the TV police dramas PRIEST and THE BLUE KNIGHT, and the first four seasons of DALLAS. George Kennedy is still with us at age 91, semi-retired but popping up as recently as 2014’s THE GAMBLER with Mark Wahlberg. COOL HAND LUKE is a must-see for fans of 60’s cinema, with another fine Newman performance and a star-making turn for George Kennedy. Put it on your watch list!

That Oscar! This week I’ll be looking at three Oscar winning performances!

Gene Hackman in THE FRENCH CONNECTION

And maybe a surprise or two!