If you only know Andy Griffith from his genial TV Southerners in THE ANDY GRIFFITH SHOW and MATLOCK, brace yourself for A FACE IN THE CROWD. Griffith’s folksy monologues had landed him a starring role in the hit Broadway comedy NO TIME FOR SERGEANTS. The vicious, wild-eyed Lonesome Rhodes was thousands of miles away from anything he had done before, and the actor, guided by the sure hand of director Elia Kazan, gives us a searing performance in this satire of the power of the media, and the menace of the demagogue.

When we first meet Larry Rhodes, he’s in the drunk tank in rural Pickett, Arkansas, a small town not unlike Mayberry. Local radio host Marcia Jeffries is doing a remote broadcast there, hoping to catch some ratings. The no-account drifter is hostile at first, but when the sheriff promises him an early release, you can practically see the wheels spinning in Rhodes’ con artist head. He strums his guitar and sings the bluesy “Free Man”, and shows a knack for storytelling. Marcia persuades him to host the morning program “A Face in the Crowd”, dubbing him Lonesome Rhodes.  His down-home charm becomes a big hit, and Marcia and Lonesome soon are taking their act to Memphis TV.

Rhodes is a natural for television and his popularity continues to soar. When he gets fired for making fun of his sponsor’s product, enterprising office boy Joey DePalma gets him a gig in New York, becoming his manager in the process. Rhodes is hired by some Madison Avenue stuffed shirts to promote Vitajex, a flagging supplement that is practically useless. Rhodes comes up with the idea to give Vitajex sex appeal, and the ads make the worthless pill a national best seller. General Hainesworth, owner of the company, sits up and takes notice. He gives Lonesome a coast-to-coast show, and full media blitz, turning the former hobo into a mega-star. Hainesworth has plans to use Rhodes as a “wielder of influence”, a mover and shaker in the realm of politics, to push his pal Senator Fuller into the White House.

But once a shitkicker,  always a shitkicker, and the flawed Rhodes’ ego can’t handle stardom. He treats Marcia like dirt, professing his love while bedding every pretty young thing in sight. He continues to drink too much, and begins to believe his own hype. After marrying a gorgeous teenage baton majorette he meets at a competition he judges, Marcia begins to see the reality of Lonesome Rhodes. Realizing she’s created a white trash Frankenstein, Marcia finally puts an end to his reign of terror in a powerhouse ending that I won’t spoil for those of you who haven’t seen the film.

Andy Griffith gives a stunning, spellbinding portrayal of Lonesome Rhodes. He’s charismatic and charming, animalistic and cruel, his flimsy veneer of good ol’ boy barely concealing the rage inside him. It’s a marvelous film debut for Griffith, and he pulls out all the stops as the unprincipled vagabond in an Oscar caliber performance. But Griffith wasn’t even nominated, a snub if there ever was one. I don’t have a problem with the winner that year (Alec Guinness in the superb BRIDGE ON THE RIVER KWAI), but to nominate Marlon Brando in SAYANORA (an inferior film, not one of his best), Anthony Quinn (in the soapy WILD IS THE WIND), and Anthony Franciosa (more of a supporting role in A HATFUL OF RAIN) over Griffith was just ridiculous. In fact, A FACE IN THE CROWD received no nominations in any category that year, proving once again the Academy doesn’t always get it right (though there were no protests or threats of boycotts… but I digress) 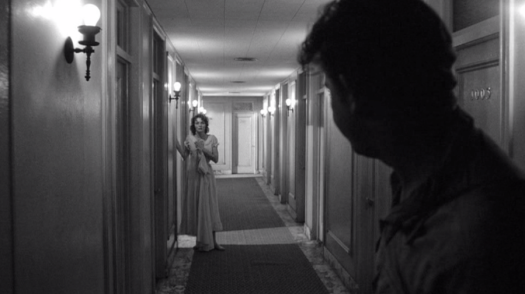 Budd Schulberg based his screenplay on his own short story, The Arkansas Traveller. The novelist had teamed with director Kazan earlier for the classic ON THE WATERFRONT. His script’s sharp as a scalpel in its dissection of advertising, politics, and television, and Kazan directs Griffith to his best piece of film acting.  The rest of the cast is outstanding, with Patricia Neal also giving an Oscar worthy turn as Marcia, the woman scorned by her discovery. Walter Matthau’s on hand as Mel, a writer in love with Marcia. The aforementioned Franciosa also makes his screen debut here as does lovely Lee Remick as the teenaged beauty queen.   Other faces in this crowd were Kay Medford, Marshall Neilan, Diana Sands, and Rip Torn. There are cameos by TV personalities of the day, such as Mike Wallace, John Cameron Swayze, Bennett Cerf, Betty Furness, Faye Emerson, and Walter Winchell.

With this being an election year, A FACE IN THE CROWD is must-see viewing for a look at how the media manipulates the masses. It’s as on-point as it was in 1957, and packs a kick harder than a swig of White Lightnin’. Oscar nominations be damned, this is a bona-fide American classic, with a tour-de-force acting job by Andy Griffith that will have you in its grip and refuse to let go. You won’t soon forget Lonesome Rhodes or A FACE IN THE CROWD. Highly recommended!

11 Replies to “The Medium is the Message: Andy Griffith in A FACE IN THE CROWD (Warner Brothers 1957)”