THE ANDY GRIFFITH SHOW is one of the most beloved sitcoms in television history, still being run on cable networks fifty-five years after its debut. The show about life in small town Mayberry revolves around the friendship between mellow Sheriff Andy Taylor and his hyperactive deputy, Barney Fife. ANDY & DON not only tells us about them, but about the real life friendship between the two stars, Andy Griffith and Don Knotts.

The book shows us the very similar backgrounds of the two comic legends. Both came from poor rural towns (Knotts in West Virginia, Griffith in North Carolina), and had their share of grief and difficulty growing up. The pair met when both were cast in the Broadway hit No Time for Sergeants, and hit it off right away. When Griffith was slated to star in a new sitcom as a country sheriff, Knotts called and asked if he could use a deputy. The rest is television history, as THE ANDY GRIFFITH SHOW became a consistent top ten smash, winning several Emmys for Knotts as klutzy, inept Barney Fife. Even after Knotts left to do movies, the two remained friends until their dying day. 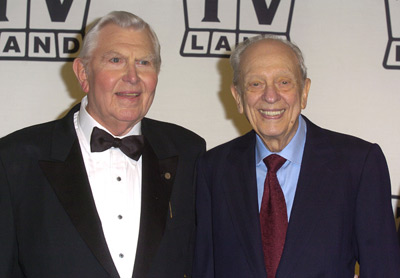 Author Daniel de Vise’ was brother-in-law to Knotts by his third marriage (both stars were thrice wed). He seems a little biased, painting Knotts more sympathetically despite his flaws, while Griffith comes off as kind of a jerk, more Lonesome Rhodes than Andy Taylor. But the book is meticulously researched, as the author interviewed people like Ron Howard, Jim Nabors (Gomer!), Tim Conway, Ken Berry, and various members of the Griffith and Knotts clans, as well as their managers, so the claims may be true. It’s an enjoyable read for fans, and gives us a warts-and-all look at both stars. Through all their triumphs and tragedies, their friendship remained intact, a testament to the warmth you feel whenever Griffith and Knotts share the screen. If you like behind the scenes tales of Hollywood, ANDY & DON is a book you shouldn’t miss.

12 Replies to “Book Review: ANDY & DON: The Making of a Friendship and a Classic American TV Show (Simon and Schuster)”