One of my favorite movies of any genre has always been SCARLET STREET. I used to watch the grainy Public Domain print on my local cable access channel over and over. When I saw that TCM was running the film last October, I recorded it for future reference, as I was in the midst of my “Halloween Havoc” marathon. I finally got the chance recently to sit down and enjoy this beautiful, crispy clear print and watch the film as it was meant to be seen.

Meek, mousey cashier Christopher Cross receives a gold watch at a party honoring his 25 years of service to J.J. Hogarth’s company. Chris has done his boring, repetitious job without complaint, though his dream has always to be a successful painter. When Hogarth leaves the party, Chris watches him get into a car with a pretty young girl. Walking home with friend and co-worker Pringle, Chris muses aloud what it would be like to have the love of a young beauty. His  wife Adele is a ballbuster, constantly berating his art and lack of gumption, and unfavorably comparing him to her late policeman husband.

Enter Kitty March. Chris encounters her getting slapped around by an unknown assailant (later revealed to be her boyfriend Johnny) and rescues her. They go for a cocktail, where Chris tries to impress her by passing himself off as a painter. Kitty, thinking he’s rich and famous, claims to be an actress. Johnny schemes to have Kitty string Chris along, playing him for a sucker. Gullible, lonely Chris now becomes a thief and embezzler in order to fund Kitty’s lavish lifestyle. Johnny brings Chris’s paintings to sell in Washington Square, where they’re snapped up by an art critic named Janeway. Believing he’s discovered a new sensation, Janeway tracks down Johnny to Kitty’s apartment, where he’s tricked into believing Kitty is the artist. Chris’s “modern art”, under Kitty’s name, becomes the toast of the art world. Things fall apart when Adele’s ex-husband shows up, quite alive, and demands to be paid off. Chris, finally free of Adele, can now marry Kitty. But the vixen cruelly rejects him, and Chris murders her, pinning it on Johnny. But Chris will never be rid of Kitty and Johnny, as we discover in the film’s haunting finale. 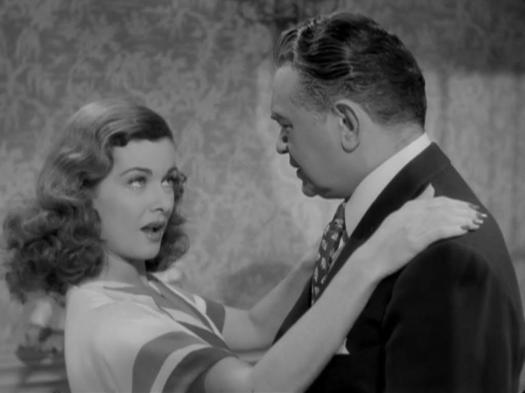 Edward G. Robinson has one of his best roles as Chris. Henpecked, his dreams never fulfilled, Chris Cross is one of the most pitiful, heartbreaking characters in film noir, and Robinson pulls it off beautifully. Joan Bennett was never sexier or sluttier than here as Kitty. She’s cruel, lazy, and downright treacherous, without an ounce of kindness, the complete opposite of Chris. Dan Duryea is her man Johnny, giving one of his patented sleazebag performances. Even though he’s framed on a murder rap, I felt no sympathy for Johnny paying for his countless other, unacknowledged sins. Rosalind Ivan (Adele) is as good here as she was in another noir, Robert Siodmak’s THE SUSPECT. Jess Barker, Russell Hicks, Samuel S. Hinds , and Margaret Lindsay round out the excellent supporting cast.

Fritz Lang’s  expressionistic direction is top-notch, and SCARLET STREET is (in my opinion) one of his top three films, right up there with METROPOLIS and M. Dudley Nichols’s screenplay was based on the French novel LA CHIENNE, filmed in 1931 by Jean Renoir. Of course, since “La Chienne” translates in English to “The Bitch”, the title had to be changed! (We’d have to wait til 1979 for a film with that title, starring the eternally bitchy Joan Collins) Milton Krasner’s B&W photography gives SCARLET STREET an atmospheric, melancholy mood, as does Hans J. Salter’s score.

The paintings in the film are by John Decker, artist and notorious Hollywood reprobate. Decker was a talented portrait artist known for his drinking bouts with famous pals like Errol Flynn, John Barrymore, and W.C Fields. His paintings are certainly unique, and I’ll leave you with a gallery of some of his artwork: