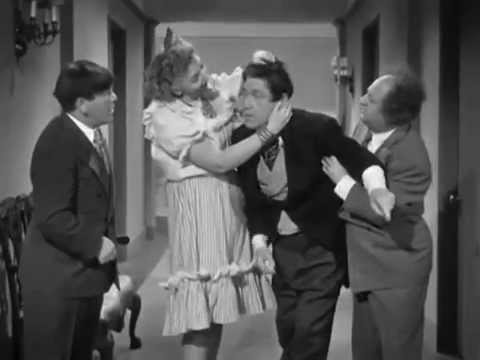 The very funny Shemp Howard was born Samuel Horwitz on March 11, 1895. He got the moniker Shemp because his immigrant mother had trouble pronouncing his first name. Shemp and his younger brother Moe formed a vaudeville act and toured the circuit, until being discovered by Ted Healy. Healy incorporated the two into his act and, together with Larry Fine, made them his “stooges”. They worked together until Shemp left Healy in 1932, replaced by his youngest brother Curly. Eventually Moe, Larry, and Curly struck out on their own, and became The Three Stooges.

Meanwhile, Shemp began appearing in Vitaphone short subjects. He was given the role of Knobby Walsh in the “Joe Palooka” series, and his comic improvising soon became the focal point of the shorts. Shemp graduated to comic relief in mainstream films, and comedy stars like W.C. Fields ( THE BANK DICK ) and Abbott & Costello ( BUCK PRIVATES ) used him to good advantage in their vehicles. When Curly had to leave the Stooges in 1947 due to a series of strokes, Shemp stepped in and rejoined the act. He remained with the team until he passed away of a heart attack in 1955.

Of the 73 shorts Shemp did with the Stooges, the best is BRIDELESS GROOM, where he takes center stage as a vocal coach who could inherit half a million dollars if he gets married ASAP. So “hold hands, you lovebirds” and enjoy watching The Three Stooges in BRIDELESS GROOM: