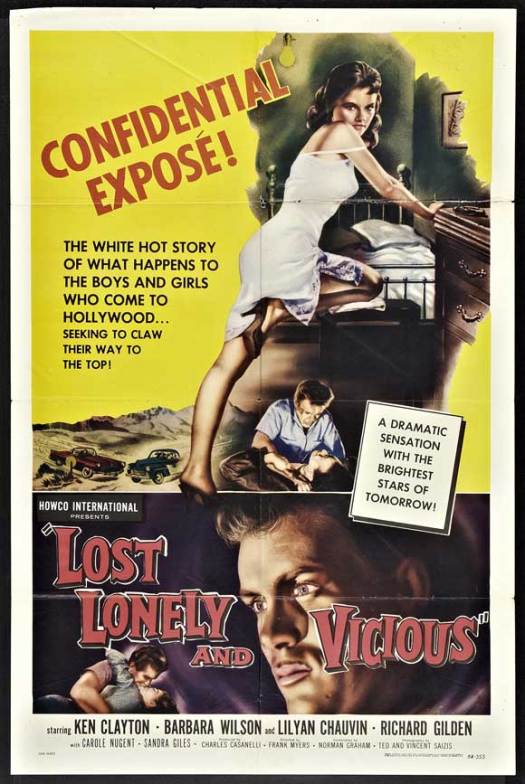 Happy birthday to me! Yes, I share my birthday with such luminaries as Charlie Chaplin, Christine McIntyre, Peter Ustinov, Henry Mancini, and coach Bill Belichick! Seeing as how we here in Massachusetts have a three-day weekend (Patriot’s Day on Monday), I’ll be pretty busy. But before I step away from the blogosphere for a few days, I thought I’d try to find something to share from the year I was born (yes, I’m THAT old!!).

What I stumbled upon was LOST, LONELY, AND VICIOUS, a fictional retelling of the James Dean mystique, right down to the two leads (superficially) resembling Dean and his REBEL WITHOUT A CAUSE co-star, Natalie Wood. It’s the story of Johnny Dennis (initials JD, get it?), a young actor “obsessed with death” on the cusp of stardom. Despite the awful acting and wretched dialogue, I kind of enjoyed it. No accounting for taste, I guess! There aren’t any actors of note here, except perhaps Lilyan Chauvin as Johnny’s drama coach Tanya. She was a real-life acting coach whose best known film role was probably as Mother Superior in the holiday slasher flick SILENT NIGHT, DEADLY NIGHT .

From Howco International, the folks who brought you such classics as THE BRAIN FROM PLANT AROUS and THE LEGEND OF BOGGY CREEK, amuse yourselves by watching LOST, LONELY, AND VICIOUS. See you in a few days, film fans!