Monogram Pictures is mostly remembered today as the home of Bela Lugosi chillers that weren’t too chilling, Charlie Chan mysteries that weren’t so mysterious, and the Bowery Boys peculiar brand of buffoonery. The Poverty Row studio seemed to throw virtually anything at the wall hoping it would stick in order to compete with the major studios of the 1940’s (MGM, 20th Century-Fox, etc). They signed burlesque stripper Ann Corio to a contract, fresh off her appearance in 1941’s SWAMP WOMAN (released by PRC, a studio even more poverty-stricken than Monogram) and concocted a farce titled THE SULTAN’S DAUGHTER, which in spite of itself manages to entertain because of the talented comic actors in the cast.

The opening says it all, as we gaze upon a book titled “Phony Phables”. The Sultan of Araban (Charles Butterworth ) has a daughter named Patra (Miss Corio), who owns all the country’s oil fields. Nazi agents (Jack LaRue, Gene Roth) want to buy them, but Patra will only sell to the Americans. Enter Jimmy and Tim (Eddie Norris, Tim Ryan), a pair of vaudeville hoofers stranded in Araban. The boys are duped into fronting for the Nazis to purchase the oil, passing themselves off as “subjects of the kingdom of Brooklyn”. Patra falls for Jimmy, while her American companion Irene (Irene Ryan) goes gaga for Tim. Evil Nazi sympathizer Kuda (Fortunio Bonanova ) kidnaps the sultan, Jimmy and Tim are implicated, then vindicated, and by film’s end, everything turns out for the best. 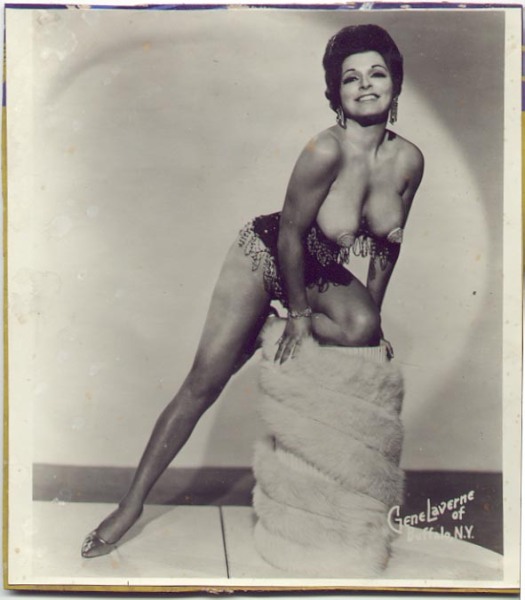 Ann Corio’s quite a lovely women, but as an actress, she’s a great stripper. Ann doesn’t do any peeling here, but her costume’s skimpy enough to show her stuff to good advantage. A star of the Minsky’s Burlesque circuit, her movie career was brief. She later put together a traveling review titled THIS WAS BURLESQUE that was quite a successful nostalgia show. Supporting stars Tim and Irene Ryan were vaudeville veterans who had an act similar to Burns & Allen. Tim became a mainstay at Monogram, acting in and writing for many of their films. He’s pretty funny here, so I guess I can forgive him for his atrocious screenplay BELA LUGOSI MEETS A BROOKLYN GORILLA . Wife Irene gets to display her comic talents, and has a pleasant singing voice. She’s best known of course for her long run as Granny on TV’s THE BEVERLY HILLBILLIES!

Then there’s Freddie “Schnicklefritz” Fisher and his orchestra. These guys were kind of cornpone precursors to Spike Jones, mixing comedy with swing music. Speaking of which, there’s plenty of jitterbugging and hepcat talk here. Director Arthur Dreifuss was an old pro at low-budget musical comedies geared for young audiences, helming many a Gale Storm production at Monogram. He concluded his career directing 1960’s youth flicks like RIOT ON SUNSET STRIP and THE YOUNG RUNAWAYS.

THE SULTAN’S DAUGHTER is a fun little film, but certainly not essential viewing. It’s the product of a bygone era, a time when low-budget studios like Monogram churned out programmers designed to entertain the public and take their minds off the war for an hour or so. I’d recommend it to fans of Monogram Pictures, Ann Corio, or Irene Ryan. And any fans of Freddie “Schnicklefritz” Fisher, if there are any left out there!

7 Replies to “This Was Burlesque: THE SULTAN’S DAUGHTER (Monogram 1943)”