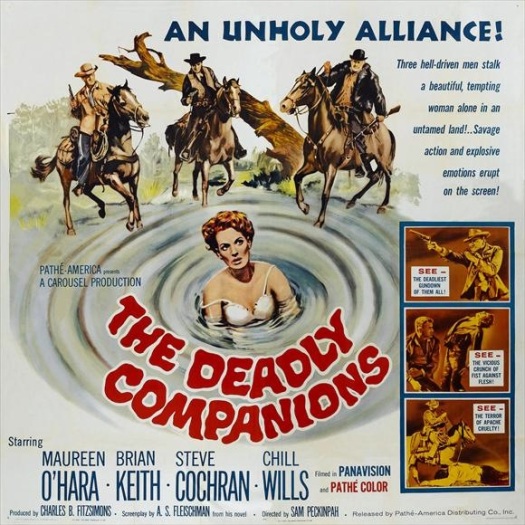 Maverick filmmaker Sam Peckinpah got his start in television, writing and directing for Westerns such as GUNSMOKE, THE RIFLEMAN, and HAVE GUN- WILL TRAVEL. In 1959, he created the series THE WESTERNER, starring Brian Keith as a drifter named Dave Blassingame, noted for its extreme (for the time) violence. When Keith was cast as the lead in THE DEADLY COMPANIONS, he suggested his friend Peckinpah as director. This was Peckinpah’s first feature film, and the result is a flawed but interesting film which has brief flourishes of the style he later perfected in THE WILD BUNCH and PAT GARRETT AND BILLY THE KID.

Keith is again a drifter, this time an ex-Union soldier known only as Yellowleg. He hooks up with a pair of Southern outlaws and they ride to Hila City to rob the bank. They get sidetracked at the saloon when it converts into a church service. Next thing you know, some robbers beat them to the punch in robbing the bank, leading to a shootout. Yellowleg accidentally kills the young son of redheaded dance hall girl Kit, played by none other than Maureen O’Hara (whose brother Charles Fitzsimons was the film’s producer). 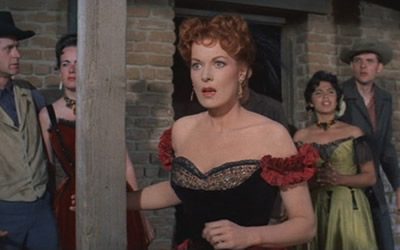 Kit is determined to bury her son in Siringo, located across hostile Apache territory. Yellowleg, feeling guilty, offers to help, but is spurned by Kit. Nevertheless, he and his companions Billy and Turkey, follow along. Billy, who noticed Kit at the barroom sermon, has sexual designs on Kit, who wants no part of him. Yellowleg catches Billy in a rape attempt and, after a fight, sends him away. Turkey, who’s not right in the head, goes with his pal, and Yellowleg and Kit are left to cross the desert alone, battling the heat, the Apaches, and each other.

Peckinpah plays on his theme of misfits banded together, working from A.S. Fleischman’s screenplay (based on his own novel). Yellowleg has a bum arm, and never takes his hat off, hiding a deep, dark secret. A Rebel soldier once attempted to scalp him, and revenge has fueled him for the past five years. Kit, a prostitute with a bastard son, has been ostracized by the women of Hila City. The only thing she ever truly loved was the boy, now shot dead by Yellowleg. Billy (Steve Cochran) is a good-looking man with a lustful dark side. Chill Wills turns in the best performance as Turkey, an unrepentant criminal who dreams of setting up his own little empire. He’s crazier than a loon, and twice as dangerous. It doesn’t take much to figure out it was Turkey who attempted to scalp Yellowleg during the Civil War.

The trademark Peckinpah violence is there, not nearly as gory as what was to come, but probably shocking for 1961. The movie’s Arizona locations are vividly filmed by DP William Clothier , noted for his work with John Wayne and John Ford, together and separately. The problem laid in a choppy script, which slowed the film down. Peckinpah demanded script control from then on, and his next film, RIDE THE HIGH COUNTRY, proved him right. It’s now considered a Western classic, while many critics dismiss THE DEADLY COMPANIONS. It’s worth watching for a look at what the director could accomplish on a low-budget. The four lead actor’s all shine (Maureen even sings the film’s mournful title song!), and Strother Martin and Will Wright offer strong support in minor roles. THE DEADLY COMPANIONS doesn’t get much recognition, but for fans of Sam Peckinpah, it’s required viewing to see the beginning of a controversial but brilliant career.