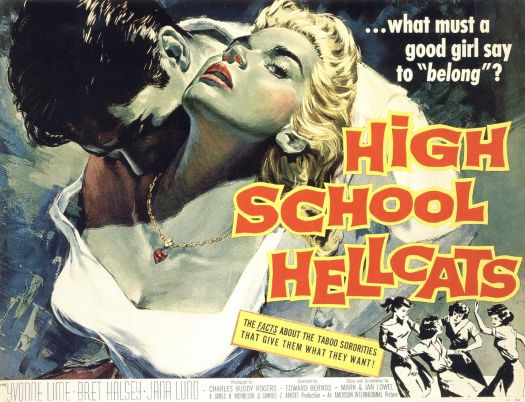 One of the most popular 50’s exploitation subgenres was the “Teenage Girl Gang” movie,  with titles like THE VIOLENT YEARS (script by Ed Wood ) and Roger Corman’s TEENAGE DOLL. The plots are pretty much interchangeable: rebellious high school chick, misunderstood by her parents, falls in with the wrong crowd. Soon she’s smoking butts, drinking booze, stealing, staying out late. There’s usually a wild party where something bad happens, and our heroine is placed in peril. If you’re into exploitation flicks, you’ll immediately recognize the storyline, and it’s reused again here to good advantage in HIGH SCHOOL HELLCATS.

Our heroine here is Joyce, the new kid at High School USA. Joyce’s parents just don’t understand her: mom’s always out playing bridge, and dad is just a prick. Joyce longs to be accepted, and is invited to join the Hellcats by anti-social Connie, a rebellious vixen whose attitude seems to be fuck the adult world, except for understanding teacher Miss Davis. Joyce goes through some initiation tests, including shoplifting, and becomes a Hellcat. In fact, Connie has plans for Joyce, to make her Hellcat #2, which causes current #2 Dolly to get jealous. To say Dolly’s a bit of a psycho is an understatement.

Meanwhile, Joyce has met Mike, who works at the local coffee shop. Mike’s an  earnest young boy working his way through night school. They hit it off, but Connie warns Joyce to stay away from him, as he’s definitely not Hellcat material. Too square. Joyce is conflicted between her feelings for Mike and her loyalty to the Hellcats, continuing to see him on the sly without the knowledge of both the Hellcats and her parents, who think she’s too young to date. Connie dares Joyce to ask high school punk Rip to a party on Saturday night, and against her better judgement she does. 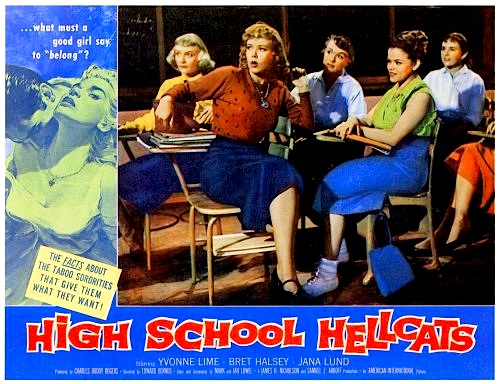 The kids break into a house where the owners are on vacation, and there’s lots of drinking, dancing, and heavy necking going on. Virginal Joyce shies away from all the action, but the boys start a game where the lights are turned out. Afterwards, someone discovers Connie face down at the bottom of a staircase, dead. All the kids freak out and split the scene. Rip and his friend drive Joyce home, but are concerned she’s gonna go to the cops. When they see Mike pull up, they follow, and a fight ensues. Mike gets the best of them, but he’s pretty banged up, and Joyce goes to his apartment to tend to his wounds. 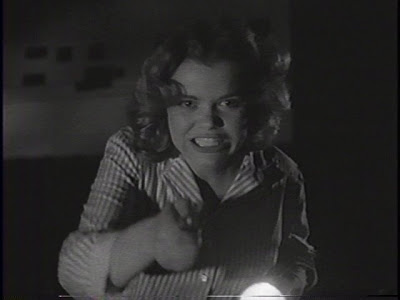 She falls asleep on his couch and comes home late for curfew, causing more parental meltdowns at home. Monday morning comes, and Lt. Manners is at school asking questions about the missing Connie. The Hellcats all clam up, but new Hellcat leader Dolly loses it, arousing Manners’ suspicions. Dolly calls for an emergency meeting that night at Hellcat HQ, an abandoned movie theater. But  Joyce doesn’t know she’s the only one invited, as Dolly tells her she’s the one who pushed Connie down the stairs, pulling a switchblade on Joyce. The other Hellcats find out about the secret meeting and alert Miss Davis, who alerts the police. Crazy Dolly lunges at our heroine, who ducks, causing Dolly to fall from the balcony. The cops arrive, confessions are made, and Miss Davis explains the whole thing to Joyce’s neglectful parents. Mike brings Joyce home and the family is reunited.

There’s nothing new here, just a well done take on the standard JD theme. The cast is mostly unknown, but all have interesting resumes. Yvonne Lime (Joyce)  was in a few teen flicks (DRAGSTRIP BABY, UNTAMED YOUTH , I WAS A TEENAGE WEREWOLF) before marrying TV producer Don Fedderson (MY THREE SONS). Bret Halsey (Mike) costarred with Jack Nicholson in Corman’s CRY BABY KILLER before moving to Italy and starring in Spaghetti Westerns and Eurospy movies, sometimes under the name Montgomery Ford. Once married to actress Luciana Paluzzi (THUNDERBALL), he also has the distinction of acting in four Lucio Fulci films, including  A CAT IN THE BRAIN. Jana Lund (Connie) gave Elvis his first screen kiss in LOVING YOU, and also appeared in FRANKENSTEIN 1970 and HOT CAR GIRL. Three cheers go out to Suzanne Sydney for her role as Crazy Dolly (who tells Joyce, “Don’t say that! Don’t ever say that!” as she approaches Joyce with the switchblade). Ms. Sydney was in a couple of biker flicks, MOTORCYCLE GANG and ANGELS FROM HELL. Rhoda Williams (Miss Davis) supplied the voice of wicked stepsister Drizella in Disney’s CINDERELLA. Robert Anderson (Lt. Manners) was young George Bailey in IT’S A WONDERFUL LIFE. Don Shelton (Joyce’s Dad) had roles in sci-fi films THEM! and INVASION OF THE SAUCER MEN, while Viola Harris (Mom) is still active, recently appearing in SEX AND THE CITY 2 and THE OTHER GUYS. Martin Braddock (Rip) was in GHOST OF DRAGSTRIP HOLLOW and tons of episodic TV. The biggest name in the credits is probably Executive Producer Charles ‘Buddy’ Rogers, who starred in the first Oscar-winning movie WINGS, and was married to America’s Sweetheart, Mary Pickford.

Three Stooges fans will certainly recognize the name of director Edward Bernds. Originally a sound tech at Columbia, Bernds got his directorial break on Stooges shorts with both Curly (MICRO-PHONIES) and Shemp (BRIDELESS GROOM ) as third Stooge. He even directed them in a feature, GOLD RAIDERS, with Western star George O’Brien. After a shakeup in Columbia’s shorts department he moved to Allied Artists and made Bowery Boys features. Freelancing when that series ended, Bernds made some interesting low-budget flicks (REFORM SCHOOL GIRL, QUEEN OF OUTER SPACE, RETURN OF THE FLY). Returning to the Stooges in the 60’s, with Curly Joe DeRita now third Stooge, he did THE THREE STOOGES MEET HERCULES and THE THREE STOOGES IN ORBIT, then filmed the live-action scenes of their TV cartoon series before enjoying a life of retirement until his death in 2000.

HIGH SCHOOL HELLCATS isn’t a groundbreaking movie by any stretch. The familiar plot holds no surprises, but for fans of 50’s Juvenile Delinquent films, it’s an entertaining way to spend 69 minutes. I dug it, and I think you will too, if you give it a shot.