Tonight I’ll be watching the Major League Baseball All-Star Game, but for those of you non-baseball fans, here’s a look at five funny films from the 1930’s & 40’s:

IT’S A GIFT (Paramount 1934, D: Norman Z. McLeod) The Great Man himself, W.C. Fields , works his magic in this delightfully demented domestic comedy about hen pecked grocer Harold Bissonette, who dreams of owning an orange grove in California. His wife (Kathleen Howard) is a domineering battle-axe, his kid (Tommy Bupp) an obnoxious, roller skating brat, and daughter Mildred (Jean Rouveral) doesn’t want to leave her “true love”. This sets the stage for some of Fields’ funniest surrealistic scenes, including his grocery store being demolished by blind Mr. Mickle and perennial nemesis Baby Leroy; poor W.C. trying to get some sleep on the porch while being constantly disturbed by noisy neighbors, a wayward coconut, a man looking for “Carl LeFong”, and Baby Leroy dropping grapes through a hole in the porch (“Shades of Bacchus!”); and a wild picnic on private property. One of Fields’ best movies, an absurd comic classic! Fun Fact: Kathleen Howard was a former opera singer who costarred in three of W.C.’s films.

GENERAL SPANKY (MGM 1936, D: Fred Newmeyer and Gordon Douglas) Spanky, Alfalfa, Buckwheat, and the “Our Gang” kids star in this Civil War era comedy that plays like a few shorts strung together. There’s not really any overt racism, as some critics claim; except for the use of the derogatory term “pickaninny” early on, it’s simply a product of its era. The story is told from the Southern POV, making it sympathetic to their cause. In fact, the slaves are treated with more dignity by the Southerners than the invading Yankee army! The warm relationship that develops between the two orphans Spanky and Buckwheat rarely gets mentioned. Still, this ain’t GONE WITH THE WIND; if it sounds offensive, just don”t watch. Fans of Our Gang/Little Rascals shorts will want to catch it, though. Fun Fact: Irving Pichel, who I’ve discussed here in past posts , plays the mean Yankee captain at odds with Spanky and friends. 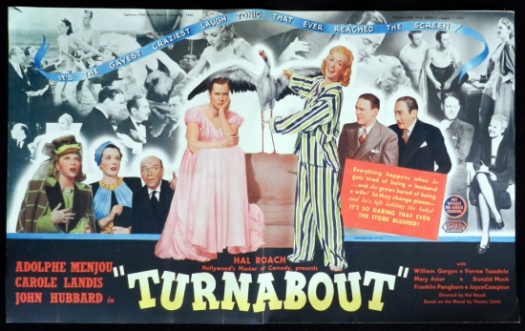 BLONDE INSPIRATION (MGM 1941, D: Busby Berkeley) Minor but amusing screwball comedy concerning an idealistic unpublished writer (John Shelton) who’s conned out of $2000 by two broke publishers (the unlikely but funny comedy team of Albert Dekker and Charles Butterworth !) to write Western pulp fiction when their drunken star scribe Dusty King (Donald Meek again!) quits. Shelton’s bland in the lead,  but the rest of the cast makes up for it, with a wisecracking script by Marion Parsonnet and swift direction from musical maestro Berkeley. Virginia Grey plays the publisher’s cynical secretary who ends up falling for the dopey, naïve Shelton. Reginald Owen, Alma Krueger, Byron Foulger, and Charles Halton all add to the fun. Fun Fact: Marion Martin, former Ziegfeld showgirl, is the “blonde inspiration” of the title, playing the dumb-blonde companion of Butterworth.

WHO DONE IT? (Universal 1942, D: Erle C. Kenton) Abbott & Costello play two soda jerks (emphasis on “jerks”) and wanna-be radio mystery writers who get caught up in a real-life murder mystery at the station. This was Bud and Lou’s first effort without the usual musical interludes (no Andrews Sisters, no swing bands, etc), and allows them to unleash their comic mayhem uninhibited. The radio setting gives them good material to work with, like their “watts are volts” wordplay riffing (they even have a bit disparaging their classic ‘Who’s On First?” routine). There are some genuinely scary touches between the slapstick from horror vet Kenton (ISLAND OF LOST SOULS, HOUSE OF FRANKENSTEIN ), and a solid supporting cast featuring William Gargan and William Bendix as a pair of dopey detectives, Mary Wickes as Lou’s love interest (!!), and Universal’s Familiar Face Brigade: Patric Knowles, Louise Allbritton, Thomas Gomez, Don Porter, Jerome Cowan, and Ludwig Stossel. Cadaverous Milton Parsons even shows up as the coroner! Fast and fun entry in the A&C catalog. Fun Fact: The page boy constantly getting over on Lou is Walter Tetley, a radio actor known to TV affecianados as the voice of Mr. Peabody’s favorite boy, Sherman!

28 Replies to “Cleaning Out the DVR Pt 8: All-Star Comedy Break”