One of the many fun things about Pre-Code films is seeing how they get away with racy dialog without being overly explicit. The risqué double entendres fly freely in PLAY-GIRL, starring Loretta Young as an independent woman who ends up marrying a degenerate gambler, winding up pregnant and husbandless until the conclusion. The story didn’t really matter to me; it was the innuendo-laden script that kept me interested.

That saucy script was written by Maurine Dallas Watkins, who wrote the play “Chicago”, later adapted into the 1942 film ROXIE HART with Ginger Rogers, and then turned into Bob Fosse’s smash Broadway musical CHICAGO, which in turn became the Oscar winning Best Picture of 2002. Ms. Watkins was a former crime reporter for the Chicago Tribune, and based her play on the murder trial of “jazz babies” Beulah Annan and Belva Gaertner. Hollywood beckoned, and she wrote screenplays for UP THE RIVER (the film debuts of both Spencer Tracy and Humphrey Bogart), THE STRANGE LOVE OF MOLLY LOUVAIN, THE STORY OF TEMPLE DRAKE (uncredited), and LIBELED LADY (Tracy again, with Jean Harlow, William Powell, and Myrna Loy).

Though the plot revolves around Loretta Young’s travails, Pre-Code favorite Winnie Lightener receives top billing as Loretta’s best friend Georgina. Lightner’s bawdy persona made her a star in the 1929 musical GOLD DIGGERS OF BROADWAY, which is now regrettably a lost film. Winnie starred early Technicolor musical comedies like HOLD EVERYTHING (with Joe E. Brown), THE LIFE OF THE PARTY, and GOLD DUST GERTIE (with Olsen & Johnson), but after the Production Code went into place, her career stalled, and by 1934 she retired from the screen to become Mrs. Roy Del Ruth. 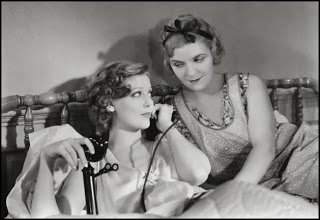 Winnie gets most of the good lines in this one. While sleeping with roommate Loretta, her panties go flying off the clothesline. Loretta asks what she’s going to do, and Winnie replies, “Keep off step ladders”. Later, when Winnie’s at work, bent over on top of a ladder, a customer quips, “I guess you ain’t got just what I want”. Loretta reads a book on merchandising, trying to better herself, and Winnie tells her, “You don’t see Peggy Joyce* reading no merchandise books and she’s a somebody. Her merchandise is the kind that sells on sight!”.

The girls also have a frenemy named Edna at the department store they work at, Edna. She’s played by another Pre-Code favorite, Dorothy Burgess (HOLD YOUR MAN, STRICTLY PERSONAL, BLACK MOON). Dorothy and Winnie are constantly at each other’s throats, and this bit of dialog is probably the best, when Loretta throws a party at her new apartment:

Winnie: “Ooh, can I see the bedroom?”

Dorothy: “You usually do”.

Winnie: “Well you oughta know, I generally meet you coming out!”

The picture’s no great shakes, but it’s the witty, sexually laced banter that makes it worthwhile. There are plenty of Familiar Faces here, with Guy Kibbee as Winnie’s sugar daddy, Norman Foster as the gambler who Loretta falls in love with, and DRACULA’s Edward  Van Sloan as the department store owner. James Ellison, Noel Madison, George “Gabby” Hayes, Roscoe Karns, and perennial cop Robert Emmett O’Connor appear in small roles. PLAY-GIRL is a fine example of what Pre-Code’s are all about, and though it’s hardly a classic, the dialog alone makes it a film to put on your must-see list.

(*Peggy Hopkins Joyce was an actress known for her many marriages and divorces, love affairs, and extravagant lifestyle. She appeared with W.C. Fields in the all-star comedy INTERNATIONAL HOUSE.)