Thrills! Chills! Romance! Action! CHANDU THE MAGICIAN plays like a Saturday matinée serial aimed directly at the kiddie crowd. Based on a popular radio series, the film is pretty antiquated seen today, its saving graces being the special effects wizardry of co-director William Cameron Menzies and the deliciously evil Bela Lugosi as the megalomaniacal villain Roxor. 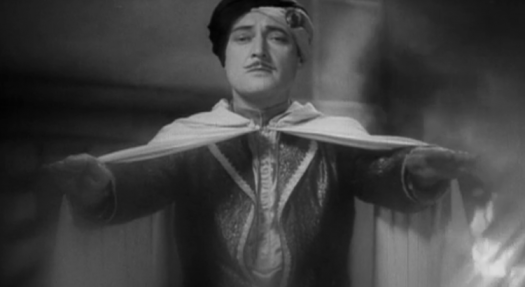 The movie kicks off with the banging of a gong and an offscreen narrator ominously intoning “Chan-du the Magician”. A hand is used to wipe the screen credits, the first of Menzies’ many filmic tricks. We’re taken inside a temple where Frank Chandler, aka Chandu, has spent three years learning the ancient secrets of the mystic arts (move over, Dr. Strange!). He’s a yogi now, master of the hypnotic eye and astral projection, and demonstrates his prowess by performing the old Indian rope trick and walking through fire. His mentor bids him to “go forth in thy youth and strength, and conquer the evil that threatens mankind”. 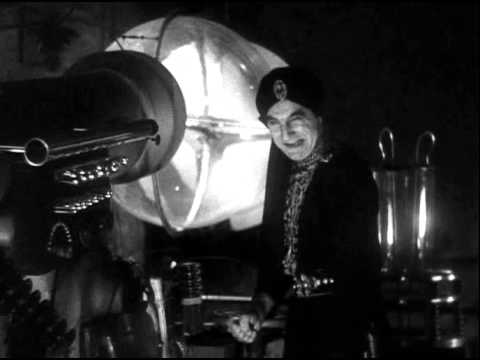 That evil is in the form of Roxor, “last of an ancient family that lived in Alexandria”. Roxor has kidnapped Chandu’s brother-in-law Robert Regent, who has invented a “death ray” Roxor plans on using to conquer the world through chaos and disorder. Chandu senses his sister Dorothy and her two (whiny, annoying) teenage kids are in danger, so he goes to them just in time to rescue them from Roxor’s minions. Chandu’s long-lost love Princess Nadji shows up, as does Chandu’s former Army orderly Miggles, another annoying character, who’s fondness for booze is countered by one of Chandu’s spells, making a mini-clone of Miggles appear every time the souse tries to drink.

Roxor’s flunky Sheik Abdulah (played by Clark Gable look-and-sound alike Weldon Heyburn, who’s about as much of a sheik as I am!) kidnaps the princess to lure Chandu into the madman’s clutches. He rescues her, but then niece Betty Lou is kidnapped, and Roxor threatens to sell her into slavery unless Regent gives him the secret of the death ray. Once again, Chandu to the rescue, and Roxor is royally pissed! He figures out a way to capture the magician by using tear gas, nullifying the power of Chandu’s hypnotic eyes, and chains Chandu in a sarcophagus, dropping it to the bottom of the Nile.

Roxor has trapped Regent’s family in a cell with a tilting floor, threatening to dump them in the Nile too, before Regent consents to activate the death ray. Chandu’s gone, Nadji is in the clutches of Abdulah, Miggles is useless, and it looks like the crazed Roxor will reign supreme! Here’s where Bela gets to do some of his patented ranting and raving, while visions of his plan for death and destruction play out onscreen:

“At last, I am king of all”, he bellows. “That lever is my scepter. London! New York! Imperial Rome! I can blast them all into a heap of smoking ruins! … All that live shall know me as their master… What will they think when they feel the power of Roxor!” But alas, Roxor has spoken too soon, as Chandu escapes his watery grave, rescues everyone, and Roxor and his minions are blown to smithereens by the death ray machine, which Regent rigged in order to stop the maniac. A happy ending is had by all. Except Roxor, of course.

Edmond Lowe was a star of silent and early talkies best known for his role as Sgt. Quirt in WHAT PRICE GLORY?, a role he repeated more than once. He makes a dashing hero, but I was never convinced he was a master yogi. Irene Ware (Nadji) would again appear with Bela as the object of his desire in THE RAVEN . Herbert Mundin (Miggles) is extremely annoying here, but good as Much the Miller in THE ADVENTURES OF ROBIN HOOD . Henry B. Walthall (Regent) was also a silent star, going all the way back to BIRTH OF A NATION.

Then there’s Bela Lugosi, once again stealing the show, going far over the top and laying it on thick as the evil Roxor. His strange pronunciations and inflections give his Roxor an exotic edge, and he chews the scenery like an overcooked steak. Believe it or not, two years later a serial was produced, THE RETURN OF CHANDU, with Lugosi switching sides to portray the master magician! It was a rare chance for Bela to act the hero, and though I haven’t seen it, its definatley on my bucket list!

Roxor’s lab is filled with weird, Strickfaden-like devices, and Menzies’ special effects were cutting edge for their time. Unfortunately, some of them don’t hold up very well today. The camerawork does though, with some wonderful imagery captured by the legendary James Wong Howe . CHANDU THE MAGICIAN does suffer from some wooden acting and stilted dialog, but as always Bela Lugosi shines like a diamond in the rough. Fans of the Hungarian star will want to savor his performance in this goulash, another delightfully demented villain to add to Bela’s Rogue’s Gallery of amazing madmen.