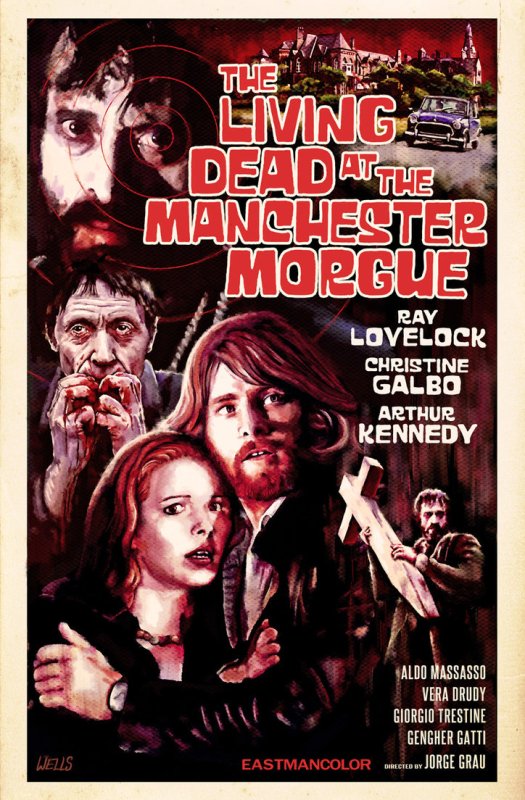 While doing some background research on actor Arthur Kennedy for my post about DESPERATE JOURNEY  back in June, I came across an IMDb entry for a movie titled THE LIVING DEAD AT MANCHESTER MORGUE. It’s description is as follows: “A cop chases two hippies suspected of a series of Manson-family like murders; unbeknownst to him, the real culprits are the living dead, brought to life with a thirst for human flesh by chemical pesticides being used by area farmers”. Sounded right up my alley, and a perfect candidate for this year’s ‘Halloween Havoc!’ horrorthon! 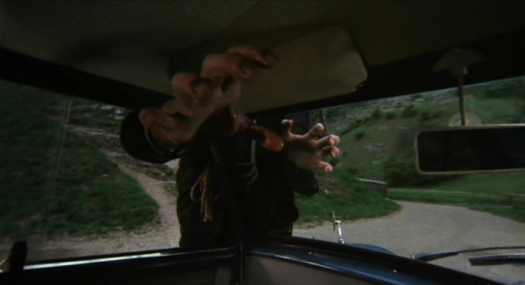 Though the description isn’t 100% accurate, THE LIVING DEAD AT MANCHESTER MORGUE is a surprisingly good Italian-Spanish made chiller with elements of giallo movies, as our lead George is traveler who stumbles into murder. His motorcycle (a nice looking vintage Norton) is backed into by Edna on his way to Wyndhamere. She gives him a lift, and get lost, stopping for directions at farm where a new “sonic radiation” pesticide is being used. It’s there Edna encounters the first zombie, which is explained away as being a tramp looking for a handout. Edna persuades George to bring her to her sister’s place in South Gate and take the car to his destination, as sister Katie’s a junkie she’s trying to persuade to go to rehab.

Katie and husband Martin are attacked by a zombie just as George and Edna show up. Martin’s brutally killed, and the police are called in, led by a dour, hard assed sergeant (Kennedy, complete with Irish brogue!) who suspects them all of being some kind of hippie death cult. This leads to conflict between young, long-haired George and the establishment sergeant, who’s convinced the young folks are guilty, while the experimental pesticide radiation causes more and more of the dead to rise and feast on the flesh of the living!

Director Jorge Grau keeps things tense and suspenseful, and there’s plenty of gore for horror lovers, as the zombies chow down on human innards. Ray Lovelock (George) spends a lot of time with his shirt half-buttoned exposing his hairy 70’s chest (hey, it was the style at the time!!). Lovelock’s noted for his roles in poliziotteschi flicks like LIVE LIKE A COP, DIE LIKE A MAN, Spaghetti Westerns (DJANGO KILL… IF YOU LIVE, SHOOT! with Tomas Milian)   , and Eurohorror (LAST HOUSE ON THE BEACH). He’s also been in more mainstream movies like Norman Jewison’s FIDDLER ON THE ROOF and 1976’s THE CASSANDRA CROSSING. Christina Galbo (Edna) made a name for herself in the Eurohorrors THE HOUSE THAT SCREAMED, WHAT HAVE YOU DONE TO SOLANGE?, and THE KILLER MUST KILL AGAIN. An actress named Anita Colby has a bit as a nurse; this is NOT the same Anita Colby famous as a model and Hollywood actress (BRUTE FORCE)    as is sometimes erroneously claimed.

As for Arthur Kennedy, he chews the scenery with relish as the ornery policeman. By this time, the five-time Oscar nominated actor was working mostly in Europe due to his alcoholism and, though the part of the tough, conservative cop is a pretty stereotypical one, Kennedy gives it his all, and proves his acting prowess hadn’t waned despite his issues. THE LIVING DEAD AT MANCHESTER MANOR was first released in the U.S as DON’T OPEN THE WINDOW, the bottom half of a double feature bill with LAST HOUSE ON THE LEFT that toured the Grindhouse and drive-in circuits. Its original title translates into DO NOT PROFANE THE SLEEP OF THE DEAD, and is also known as LET SLEEPING CORPSES LIE. But by any name, it’s a good, atmospheric zombie movie that I recommend you watch this Halloween season. Or any season you’re in the mood for some Eurohorror fun!