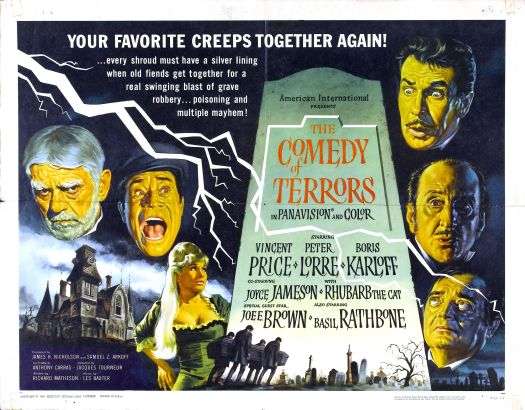 Vincent Price, Peter Lorre, Boris Karloff, and Basil Rathbone had all appeared together on film in various combinations seven different times, but never all at once until THE COMEDY OF TERRORS. This black comedy masterpiece spoofs AIP’s own Poe flicks and Shakespeare, with the quartet of chiller icons having a grand old time playing Richard Matheson’s delicious screenplay to the hilt. Horror and noir vet Jacques Tourneur gets to direct the old pros, and the supporting cast features classic comic Joe E. Brown and Rhubarb The Cat (more on him later!).

Price  is Waldo Trumble, the besotted, greedy proprietor of Trumble & Hinchley Funeral Parlor. He’s cruel to wife Amaryllis (Joyce Jameson), a failed opera singer (“I wish her vocal chords would snap”) who he married only to gain control of the company from her doddering old, half-deaf father Amos. “Demon rum will get you yet!”, she tells Waldo, to which he replies, “I look forward to that occasion with anticipation, madam”. Waldo keeps trying to give Amos a dose of poison, which the elderly man thinks is medicine, and Amaryllis keeps stopping him, causing the befuddled Amos to wail, “I don’t believe you care whether your poor old father lives or dies!”.

Business has been off lately, and landlord Mr. Black (the Shakespeare-spouting Rathbone ) demands his year’s worth of back rent or he’ll throw them all out within 24 hours (Waldo calls him a “penny-pinching old pig”). Soon Waldo and his assistant, the fugitive Felix Gillie (Lorre , who’s wanted for “sundry illicit peccadillos”), go and drum up some business on their own, murdering a well-to-do local. They get the stiff’s funeral, but the widow stiffs them, running off to Boston without paying, leading Waldo to a morbid conclusion: he’ll “kill two birds with one pillow” by murdering Mr. Black, thus billing for an expensive funeral and ridding himself of his overdue rent obligations.

This leads to total chaos when Black, who suffers from catatonia, refuses to stay dead! “What place is this?”, he bellows as he rises from his coffin, causing Waldo and Felix to kill him again. Black’s finally laid to rest in his family crypt, but rises again, scaring the beejesus out of the cemetary caretaker (Big-mouth Brown in his final screen appearance). While Waldo and company celebrate their success, Black grabs an axe and heads for the funeral parlor in a rainstorm, ready to unleash mayhem on the lot of them!

Price is at his hammy best as Waldo, with one snide remark after the other. When he finds out the first victim’s widow has run off, the murderous undertaker moans, ” Is there no morality left in the world?”. On Amaryllis’s singing, he growls, “Will you stop that ungodly caterwauling!”. He and Lorre (who calls Waldo ‘Mr. Tremble’) are like a macabre version of Abbott & Costello with their homicidal wordplay and bumbling pratfalls (performed by stunt doubles). Rathbone gets to shine too, spouting Shakespeare alone in his bedroom while fencing with shadows, and continuously popping back from the dead with lines like “What jiggery pokery is this?”.

But its King Boris who truly steals the show as the feebleminded Amos Hinchley. Karloff shows a flair for comedy rarely seen in his films with just a look and a quick quip. Boris stands out amidst all the absurdity, and his soliloquy at the dinner table, babbling about embalming methods, is a scream:

“Old Ben Jonson, buried standing up… Edward III, buried with his horses… Alexander the Great, embalmed in honey, so they say, heehee… Egyptians used to hollow ’em out and fill ’em full of rosin… Egyptains used to bend ’em in two and stick ’em in a vase of salt water… give ’em false eyes, yank their brains out with a hook!”.

Joyce Jameson holds her own with the seasoned vets as the off-key Amaryllis. She’d acted with Price and Lorre in a segment of the horror anthology TALES OF TERROR, and appeared in films from THE APARTMENT to DEATH RACE 2000, but is best remembered as one of the “Fun Girls” from Mt. Pilot on THE ANDY GRIFFITH SHOW . Then there’s Rhubarb the Cat, who slinks his way throughout the film as Cleopatra. The Orange tabby, who’s real name was Orangey, was a star in his own right, winning two Patsy Awards (the animal equivalent of the Oscar)  for RHUBARB (costarring with Ray Milland) and as Audrey Hepburn’s pet “Cat” in BREAKFAST AT TIFFANY’S. The feline was one of trainer Frank Inn’s animal stars, and his science-fiction credits included THIS ISLAND EARTH and THE INCREDIBLE SHRINKING MAN.

Richard Matheson’s  screenplay sends up his Poe films with wit and black humor. Jacques Tourneur takes a break from serious filmmaking like CAT PEOPLE and OUT OF THE PAST , and lets the veteran horror actors take free reign. All the old AIP behind the scenes gang contribute to the madness (DP Floyd Crosby, music score Les Baxter, editor Anthony Carras, art director Daniel Haller), and have a good time doing it. But it’s the four Masters of Terror that make this worthwhile, especially Karloff’s comical performance as Amos. Sandwich this one between ABBOTT & COSTELLO MEET FRANKENSTEIN and YOUNG FRANKENSTEIN for a triple bill of horror and humor on All Hallows Eve, and have yourself a hysterically horrific Halloween!