Satan worship was all over the big screen back in 1968.  There was ROSEMARY’S BABY of course, that Oscar-winning fright fest from Roman Polanski and William Castle. WITCHFINDER GENERAL found Vincent Price on the hunt for daughters of the devil, while CURSE OF THE CRIMSON ALTAR boasted an all-star horror cast of Boris Karloff, Christopher Lee, Barbara Steele, and Michael Gough. Lee starred in a Hammer tale of satanism that year titled THE DEVIL’S BRIDE, as an occult expert pitted against a cult led by Charles Gray. That’s right- it’s Dracula vs Blofeld in a battle for souls!

Sir Christopher’s  on the side of the angels for a change as the Duc de Richleau, who along with army buddy Rex Van Ryn, find their late chum’s son Simon Aron. Simon’s been “meddling with black magic” in a coven of devil worshippers led by Mocata, an adept Satanist. They manage to spirit Simon away, but the evil Mocata has him in his thrall, planning on baptizing him into the cult along with a young girl named Tanith. Rex knew Tanith in the past, and rescues her as well. Taken to the country home of de Richleau’s niece Marie and her husband Richard, Mocata tries to invoke his will over Marie, until her child Peggy barges into the parlor.

Tanith leaves with Rex for fear of harming them all, because Mocata is using her as his instrument of destruction. The Duc, Simon, Marie, and Richard form a circle to protect them from Mocata’s black magic, including a giant spider and the Angel of Death himself! The titanic battle is won when de Richleau speaks the potent Susama Ritual: “Oriel Seraphim, Eo Potesta, Zati Zata, Galatin, Galatah!”. But the Angel of Death must be served, and Rex returns with the dead Tanith in his arms.

But the war is not over yet, as Peggy has disappeared. The Duc summons Tanith back from the dead, using Marie as her channel, to locate the missing child. Simon thinks he knows where the cult is and bolts out on his own. He gets there ahead of the rest only to discover Mocata will sacrifice Peggy to restore Tanith to life through a “transference of souls”. The group arrives, but can’t defy Mocata’s power, as he’s now summoned up Satan! Tanith’s spirit once again overtakes Marie, who has Peggy repeat the Susama Ritual, causing the devil to return to Hell and Mocata’s coven to follow him in a fiery conclusion. The Angel of Death has been appeased, Tanith returns to the living, and The Duc thanks God, “for He is the one we must thank”. 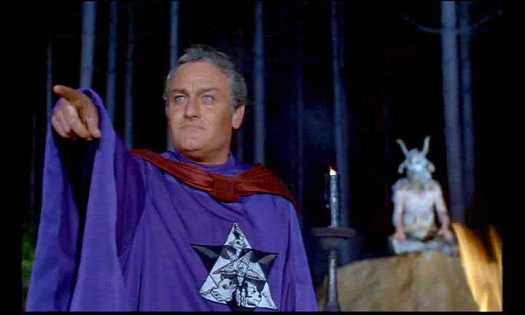 It’s refreshing to watch Lee in a heroic role, battling against the forces of darkness instead of being one of them. That smooth as butter voice serves him well while spouting all that Latin, and even gets involved in some fisticuffs. Charles Gray is suave and sophisticated as Mocata, bringing a malevolent presence to the role. Gray later battled James Bond in DIAMONDS ARE FOREVER as Spectre head Ernst Stavro Blofeld, was Sherlock Holmes’ brother in THE SEVEN-PER-CENT SOLUTION, and The Criminolgist in the cult classic THE ROCKY HORROR PICTURE SHOW. He’s more than a match for Lee in this devilish film. 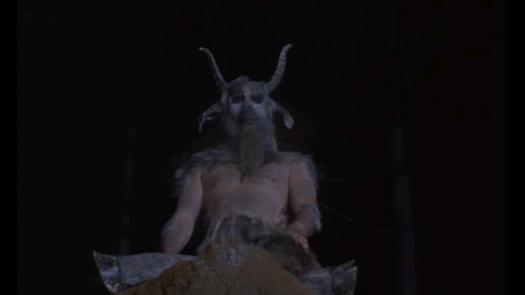 If you’re reminded of an AIP film here, credit screenwriter Richard Matheson , who adapted Dennis Wheatly’s book “The Devil Rides Out”. Matheson had worked for Hammer once before, penning DIE! DIE! MY DARLING starring Tallulah Bankhead. Hammer vet Terence Fisher keeps the film moving at a rapid , almost serial-like pace. The special effect are *meh*, but serve their purpose for the era. THE DEVIL”S BRIDE is a fast and fun film, and a rare chance to watch Christopher Lee play the good guy. Another perfect Halloween treat!