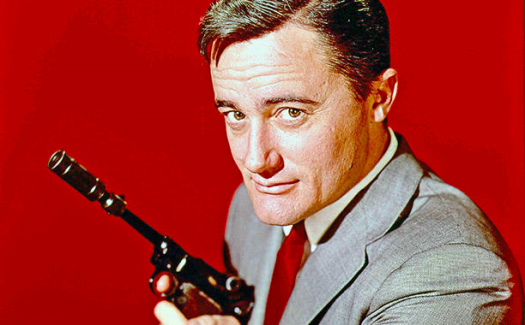 The Grim Reaper continues his onslaught on 2016, taking another classic star with him to Valhalla. Robert Vaughn , last survivor of THE MAGNIFICENT SEVEN and ultra-suave star of TV’s THE MAN FROM U.N.C.L.E, has died at age 83, closing the books on a magnificent career in film, television, and the stage.

Born to acting parents on November 22, 1932, Vaughn acted in small roles before landing the lead in Roger Corman’s unintentionally funny TEENAGE CAVEMAN. A year later, he was Oscar nominated for his performance as accused murderer Chester Gwynn in THE YOUNG PHILIDELPHIANS… what a difference a year makes! His role as Lee, the gunman who loses his nerve in THE MAGNIFICENT SEVEN, is a standout among that all-star cast. Vaughn continued to act in both movies and TV parts before landing the part that made him a pop-culture superstar.

THE MAN FROM U.N.C.L.E (United Network Command for Law and Enforcement) debuted September 22, 1964 in the midst of the James Bond craze, and was a huge hit. Vaughn’s smooth Napoleon Solo was the small screen’s answer to 007, aided by his partner, the Russian Illya Kuryakin (David McCallum of today’s NCIS fame), taking on the villainous organization known only as THRUSH. Veteran Leo G. Carroll played their boss Mr. Waverly, sending the agents on missions of international intrigue, with plenty of beautiful girls and super-spy gadgets along the way. Vaughn and McCallum became teen idols, appearing in all the mags of the era, and the merchandisers went wild with paperbacks, comics, and toys (I had the attaché case compete with badge, gun, and secret gadgets… wish I still did!). The series inspired a spinoff THE GIRL FROM U.N.C.L.E. starring Stefanie Powers as female agent April Dancer, which lasted a season. Some of the two-part episodes were expanded into eight (yes,eight!) feature films, and Vaughn reprised his Solo role for cameos in the TV sitcom PLEASE DON’T EAT THE DAISIES and the Doris Day spoof THE GLASS BOTTOM BOAT. Vaughn and McCallum reunited two decades later for the TV Movie THE RETURN OF THE MAN FROM U.N.C.L.E.: THE FIFTEEN YEARS LATER AFFAIR. 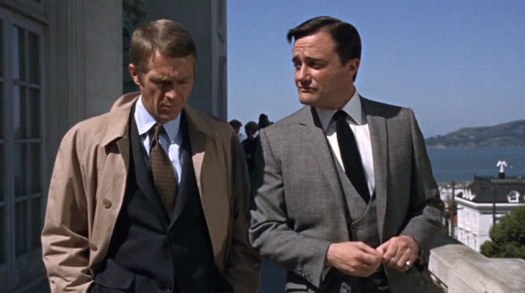 After U.N.C.L.E.’s four year run, Vaughn kept busy as mainly a supporting actor. He was Steve McQueen’s antagonist in BULLITT , Casca in JULIUS CAESAR, the doctor in THE MIND OF MR. SOAMES, the senator in THE TOWERING INFERNO, the professor in STARSHIP INVADERS, Gelt in BATTLE BEYOND THE STARS (playing off his MAG7 role), and an evil millionaire in SUPERMAN III. He costarred with Nyree Dawn Porter for two seasons in THE PROTECTORS on television, had a recurring role as General Stockwell in THE A-TEAM, and played a veteran con man in the British series HUSTLE. His TV guest-starring resume reads like a list of classic television shows through the decades: GUNSMOKE, PLAYHOUSE 90, ALFRED HITCHCOCK PRESENT, THRILLER, WAGON TRAIN, BONANZA, THE DICK VAN DYKE SHOW, COLUMBO, HAWAII FIVE-O, THE LOVE BOAT, MURDER SHE WROTE, and LAW & ORDER. Vaughn did a ton of TV mini-series too, winning an Emmy for WASHINGTON: BEHIND CLOSED DOORS, and adding his thespic abilities to CAPTAINS AND THE KINGS, BACKSTAIRS AT THE WHITE HOUSE, CENTENNIAL, and THE BLUE AND THE GREY.

I could go on and on, but I think you get the picture. Robert Vaughn was one of the most reliable actors of the past sixty years, working steadily in every genre, and doing it with both style and substance. He was always a welcome presence in movies and TV, and he will certainly be missed.