King of Classic Horror Boris Karloff was born on this date in 1887. The actor is beloved by fans for his work in genre flicks like FRANKENSTEIN, THE MUMMY , THE BLACK CAT, THE BODY SNATCHER , and many other screen tales of terror. But Karloff had always prided himself on being a working actor, and stepped outside the genre bounds many times. He excelled in some early gangster classics (THE CRIMINAL CODE, SCARFACE), played George Arliss’ nemesis in HOUSE OF ROTHSCHILD, was a Chinese warlord in WEST OF SHANGHAI, an Oriental sleuth in Monogram’s MR. WONG series, the psychiatrist in THE SECRET LIFE OF WALTER MITTY, and a scientist in THE VENETIAN AFFAIR . And then there’s John Ford’s THE LOST PATROL.

The film itself tells the story of a British troop traveling through the Mesopotamian desert circa 1917. When their leader is shot dead by an unseen Arab bullet, the stoic Sergeant (Victor McLaglen , looking every inch the hero) takes over the regiment. Problem is, the commander has taken their mission’s location to the grave with him, and the men are hopelessly lost in the hot, oppressive desert. Stumbling upon an oasis, they find an abandoned outpost and plan to spend the night before soldiering on. Next morning, the men discover their sentries have been killed and their horses stolen, leaving them stranded in the desert as the hidden Arab hoard begins to pick them off, one by one.

THE LOST PATROL is Karloff’s juiciest non-horror role. As the religious fanatic Sanders, he gives us a portrait of a man slowly descending into madness. His devotion to the Bible draws sneers from the macho troopers, as he exclaims with awe, “This very spot (Mesopotamia)… is the actual Garden of Eden!”. When the roguish Brown (Reginald Denny) regales the men with his tales of sexual conquests past, Sanders sternly admonishes him: “Has your whole life been filled with filth, talk of brawling and lust, even here and now, close to your death!”. Toward the end, when the troop is down to Sarge, Sanders, and Morelli (Wallace Ford ), a British biplane spots them. Landing in the vastness of the desert, the pilot gets out and is swiftly assassinated by the unseen enemy. Sanders goes berserk, screaming at Sarge, “You killed him! He came in answer to MY prayers for ME, and you KILLED him!!”, attempting to cave Sarge’s head in with his rifle butt. Sanders is subdued and tied up for his own good, but escapes his bondage and heads across the dunes, wearing sackcloth and carrying a large staff topped with a cross, as Max Steiner’s music swirls, walking to his inevitable doom. 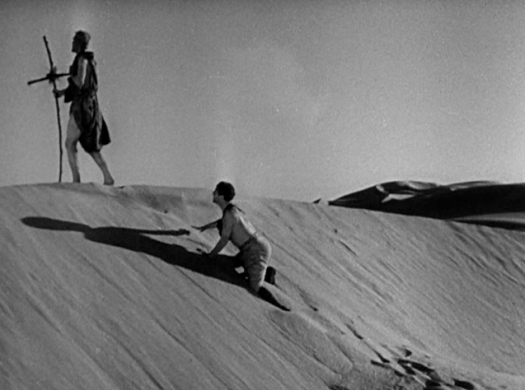 Boris has a field day as Sanders, playing to the balcony with gusto. The pious, prudish Sanders always has his nose in the Bible for comfort, seeking solace from his heathen comrades and his grim fate. Looking like a gaunt ghoul from one of his horror flicks, he whines, screams, and cackles like a madman. His wide-eyed, haunted visage tells us he’s already on the brink of insanity before his final act of desperation. It’s a bravura, over-the-top performance that shows once again the range of this great actor. Outside the realm of horror, Karloff shows us the horror of war and madness, and is a hell of a lot of fun to watch. 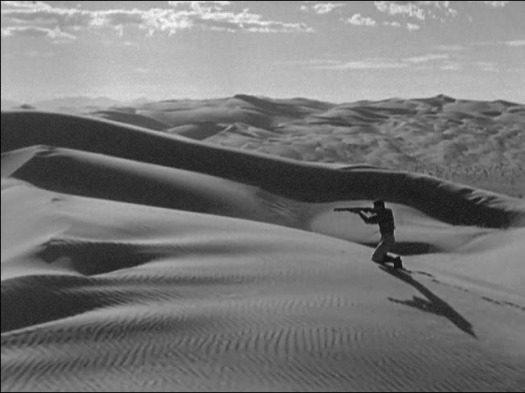 John Ford  gives us a stark, white backdrop, the Arizona desert subbing for the isolated Mesopotamia, and cinematographer Harold Wenstrom fills the screen with the great shots you’d expect from a Ford movie. The Dudley Nichols/Garrett Ford screenplay is compact and tense. Besides those actors previously mentioned, J.M. Kerrigan, Billy Bevan, and Alan Hale Sr. offer fine support. Boris Karloff shows once again he was more than just a horror star (most of the classic monsters were), he was a superb character actor, and Sanders is a showcase for his thespian talents. If you’ve only seen him in genre films, I suggest you give THE LOST PATROL a chance, and watch a master craftsman at work. Happy birthday, Boris, and thank you!