Let’s return to those thrilling days of yore before CGI and enter the wonder-filled world of Special Effects legend Ray Harryhausen! I’ve covered some of Harryhausen’s fantastic work before (ONE MILLION YEARS BC , EARTH VS THE FLYING SAUCERS , THE VALLEY OF GWANGI ), and most of you regular readers know of my affection for his stop-motion wizardry. So without further ado, let’s dive right into IT CAME FROM BENEATH THE SEA. 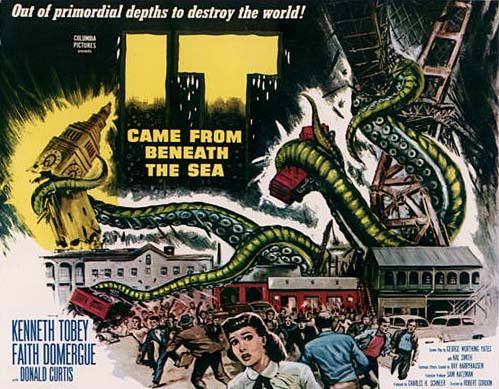 An atomic submarine picks up a mysterious large object on its sonar. The sub’s hit hard, and radiation is detected in the surrounding area. The damaged sub is taken to Pearl Harbor for repairs, and a substance found on it is determined to be from a “living creature” by eminent scientist Dr. John Carter (Donald Curtis) and beautiful marine biologist Prof. Leslie Joyce (Faith Domergue ). Sub Commander Pete Matthews (Kenneth Tobey ) and Leslie immediately butt heads, which means they’re going to hook up before it’s all over. But let’s face facts, no one cares about the romantic subplot, we’re here for the monster, determined to be a gigantic octopus! 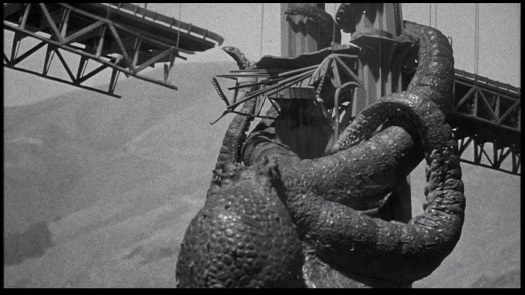 Ocky (as I’ve taken to refer to him) has been disturbed by H-Bomb tests in the Pacific, and his radioactivity has caused the fish he usually feeds on to flee, so now Ocky is going after larger prey. He attacks a tramp steamer and eats everyone but a small raft of survivors, who confirm Leslie’s theory. The U.S. Navy goes out in full force hunting for Ocky, who eats a deputy sheriff off the coast of Oregon. The entire Pacific Coast is shut down, as Ocky makes his way to San Francisco, wreaking havoc at the Golden Gate Bridge. The fabled bridge has been wired with electricity to shock the beast, and Pete and Dr. Carter board the sub with a special jet-propelled torpedo to launch into Ocky’s brain. Meanwhile, Ocky’s on the loose in the Market Street area, causing destruction, snatching a helicopter out of the sky, and allowing the filmmakers to add plenty of shots of panicked citizens running down the streets of San Francisco!

Army flamethrowers drive Ocky back to the sea, and our intrepid heroes launch their super-duper torpedo. But Ocky catches the sub in it’s six-armed grip- that’s right, el cheapo executive producer Sam Katzman held the budget reins so tight, it only allowed Harryhausen to animate six octopus arms! Anyway, Pete scubas out and uses a harpoon gun to shoot plastique explosives at Ocky, but isn’t successful, so Dr. Carter bravely does the deed, hitting Ocky square in his octopus eyeball and blowing his head off, making the Pacific Coast safe for surfers once again!

Ocky’s stop-motion scenes of destruction are exciting, but there’s only so much you can do with a giant octopus. The monster in our main attraction is another story. 20 MILLION MILES TO EARTH begins with a spacecraft crash-landing off the coast of Sicily. Some brave fisherman (with bad Italian acc-a-centas) board and find two humans still alive. They pull them off before the ship sinks, and little, annoying Pepe (played by future VEGA$ co-star Bart Braverman) is sent to get help from a visiting doctor (Frank Puglia ) , but Dr. Leonardo is only a zoologist, so he sends his med student granddaughter Marisa (Joan Taylor) to attend the surviving crewmen. One dies, but Col. Bob Calder (William Hopper, PERRY MASON’s Paul Drake) demands to speak to his superiors, butting heads with Marisa in the process (and you already know what that means!). Meanwhile, enterprising Pepe finds a capsule loaded with a mysterious, jellylike substance, so he sells it to Leonardo for 200 lira (so he can buy a “Texas cowboy hat”!).

The jelly hatches a tiny, strange-looking creature, so Leonardo and Marisa put it in a cage with plans to take it to the Rome Zoo for study. But next morning the thing has grown larger, and escapes while in transit. Annoying Pepe tells Air Force brass he sold the stuff in the capsule to Leonardo, and they track him down. Seems that spacecraft was a secret expedition to Venus, and the creature in question is a Ymir (though it’s never called that in the film).

The Ymir wanders the countryside scaring horses and sheep, coming across some sulfur in a barn, which happens to be the Ymir’s favorite food. While snacking, Ymir is attacked by a dog… bye, bye dog! The local farmer stabs it with a pitchfork, and Ymir attacks him! This pisses off the local Commissario, who no longer wishes to cooperate with the Americans and wants Ymir dead. The Italian higher-ups give Calder one last chance to capture Ymir, and they do, using a net and zapping poor Ymir into unconsciousness with high voltage. 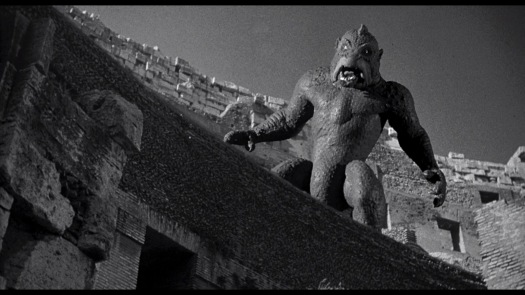 Ymir (who’s now grown to gigantic proportions!) is kept sedated by electricity and studied at the Rome Zoo. The Air Force holds a press conference and allows three reporters to view the beast. When an accident short-circuits the electricity, Ymir breaks free from his bondage, and engages in a titanic battle with a zoo elephant. Ymir goes on a rampage through the streets of Rome wreaking havoc, and you guessed it, we get shots of panicked citizens fleeing for their lives! The armed forces can’t stop Ymir as it heads to the Colosseum, where bazookas finally take it down, as it hangs on for dear life before plunging to its demise.

The Ymir is Harryhausen’s most iconic (and lifelike) creation. Like Frankenstein’s Monster and King Kong before it, the Ymir is a frightened and misunderstood creature  trapped in a world it never made. The scene where police are tracking down Ymir with dogs is reminiscent of an old Universal horror; all that’s missing are the torches and pitchforks. Ymir definitely gets the viewers to sympathize with its plight, and I felt sorry to see the poor beast persecuted to its inevitable doom.

20 MILLION MILES TO EARTH is my favorite of the two, and I consider it Harryhausen’s masterpiece. IT CAME FROM BENEATH THE SEA is fun, but the story of the Ymir still resonates, and is a certified science-fiction classic. See them both and enjoy the genius of Ray Harryhausen!