With the success of films like WHITE LIGHTING, CANNONBALL, DEATH RACE 2000, and SMOKEY AND THE BANDIT (not to mention the continuing fascination with Evel Knenevel), movies revolving around stunts and stuntmen were big box office in the 1970’s. New Line Cinema took note and produced STUNTS, a murder mystery about stuntmen being killed off that gives us a behind-the-scenes look at low-budget filmmaking in addition to a good cast and well-staged action. 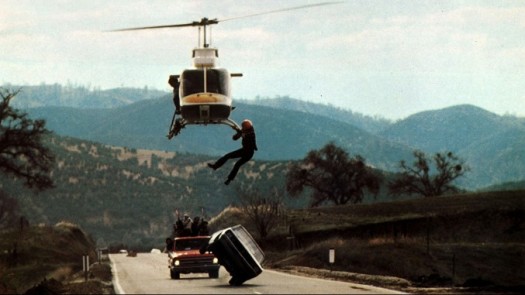 When stuntman Greg Wilson’s hanging from a helicopter gag goes horribly awry, resulting in him plummeting to his death, his brother Glen arrives on the set determined to do the stunt himself and investigate Greg’s demise. Along the way he picks up B.J. Parswell, an attractive reporter doing a story on stuntmen. Glen’s fellow stuntmen start getting picked off one by one in gruesome “accidents”, and he must find the killer before he becomes next.

This basic variation on “Ten Little Indians” serves as the backdrop for some exciting stunt-and-special effect scenes, including one where Glen, asking for more explosive charge in his car, does a spectacular five-and-a-half rolls, emerging unscathed. The film-within-a-film setting also allows the viewer to observe some aspects of moviemaking on a tight budget, which always fascinates me. Director Mark L. Lester keeps things moving, adding comedy to the mystery and action. Lester knew a thing or two about low-budget films, having helmed TRUCK STOP WOMEN and BOBBIE JO AND THE OUTLAW among others, before making hits like ROLLER BOOGIE, FIRESTARTER, COMMANDO, and CLASS OF 1999. 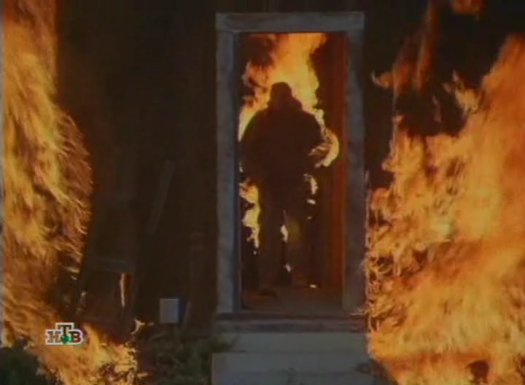 But the real stars are the stuntmen behind the scenes, and this film assembled some of the best: Joie Chitwood (cars), Deanna Coleman (motorcycles), Dar Robinson (high fall), Lee Pulford (barroom brawl), and Chuck Tamburro (aeriel) all perform their specialties to thrill the audience. STUNTS doesn’t work as a mystery (it was originally titled WHO IS KILLING THE STUNTMEN?), but as an action pic it’s chock full of wild and wooly, death-defying stunts and, though not the best of it’s genre, is an entertaining 90 minutes of fun for movie buffs.

4 Replies to “Danger Is Their Business: STUNTS (New Line Cinema 1977)”