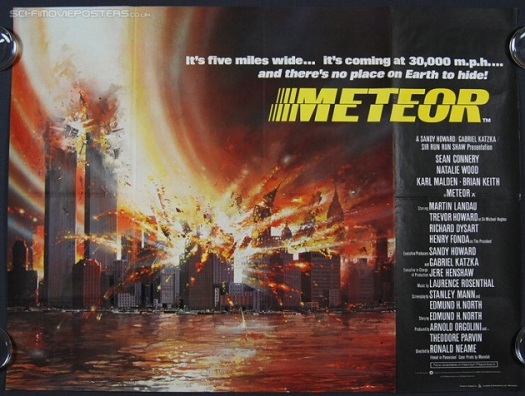 American-International Pictures had gotten pretty fancy-schmancy by the late 70’s. The studio was leaving their exploitation roots behind and branching out to bigger budgeted films like FORCE TEN FROM NAVARONE, LOVE AT FIRST BITE, and THE AMITYVILLE HORROR, with bigger name stars for marquee allure. Toward the end of 1979 they released METEOR, a $16 million dollar, star-studded, special-effects laden, sci-fi/ disaster film spectacle that bombed at the box-office and contributed to the company’s demise.

Coming at the tail end of the disaster cycle, METEOR is formulaic as hell. Take a group of well-known stars (Sean Connery, Natalie Wood , Karl Malden , Brian Keith , Martin Landau, Henry Fonda ), give them a disastrous menace to combat (in this case a five-mile wide meteor hurtling toward Earth), add some conflict (US/USSR Cold War relations), and some scenes of destruction, and voila! instant disaster movie! Unfortunately, by 1979 audiences had already grown tired of the formula and its various permutations, leaving METEOR to crumble like so much space dust.

A brief summary: former NASA scientist Paul Bradley (Connery), creator of America’s secret nuclear missile defense satellite Hercules, is plucked from his yacht race and brought back into service by ex-boss Harry Sherwood (Malden). A wayward comet has struck the asteroid belt, and now the aforementioned five-mile-wide meteor (nicknamed Orpheus) threatens good ol’ Mother Earth. The President (Fonda) holds a televised speech admitting they have the nuclear satellite, and asks for Russia’s cooperation, knowing they too have one (code name Peter The Great). The Ruskies send scientist Dr. Dubov (Keith) and his astrophysicist interpreter Tatiana (Wood) to help, much to the chagrin of commie-hating General Adlan (Landau). Now that the two superpowers have joined together, can they put aside their differences and turn their respective missiles at Orpheus instead of each other in time to avert a global catastrophe?

It’s not exciting as it may sound. Connery looks bored, Malden and Landau overact, and Fonda’s obviously only there for the paycheck. Only Keith and Wood seem engaged in the material, though Trevor Howard does okay in his tiny role as a British astronomer. Besides the big names, there are other, lesser Familiar Faces in lesser roles: Joseph Campanella, Richard Dysart, Bibi Besch, Sybil Danning, Gregory Gaye, Clyde Kusatsu, newscaster Clete Roberts, and Uncle Walt’s nephew Roy Disney (wait… how’d he get in here??). They even got THE POSEIDON ADVENTURE’s Ronald Neame to direct, hoping to capture some of that movie’s popularity. Didn’t work- the new film was nowhere near that early disaster classic in terms of character development, script, or excitement.

The special effects scenes are good, not great. There’s a tsunami in Hong Kong, an avalanche in the Swiss Alps, and a meteor fragment that destroys a large swath of New York City. There are some unintentionally funny moments, like watching Connery and Malden slog through a muddy flood in a subway tunnel, Malden’s comb-over flopping down his shoulder. We get ominous music every time Orpheus appears onscreen, kind of like when “Bruce” shows up in JAWS. It’s all silly and overwrought, and by the next year AIP founder Samuel Arkoff, his big-budget gambles all gone sour, sold the company to Filmways, which was later bought out by Orion, which in turn was sold to MGM, who now own the rights to the AIP catalog. Old Sam should’ve stuck with beach parties and monster movies.