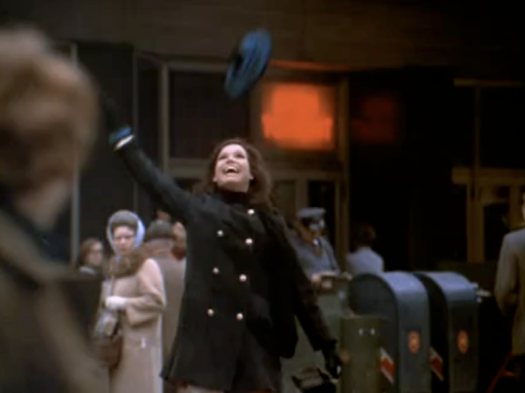 She was America’s TV sweetheart in the 60’s and 70’s. Beautiful and talented Mary Tyler Moore has passed away at age 80, her smile no longer brightening this world. Mary was Laura Petrie, the perky and perfect suburban housewife on THE DICK VAN DYKE SHOW, then broke new ground as single career girl Mary Richards on THE MARY TYLER MOORE SHOW, both seminal sitcoms from television’s Golden Age of Comedy. 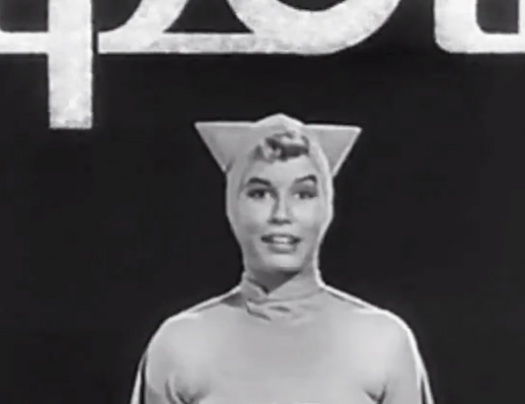 Born in Brooklyn Heights in 1936, Mary became a dancer as a teen, and got her first show business break as ‘Happy Hotpoint’, a tiny dancing elf in TV commercials for Hotpoint stoves. Her next break got her noticed, playing the sexy secretary on RICHARD DIAMOND PRIVATE DETECTIVE, which starred David Janssen. Mary never fully appeared on the show, only her smoky voice and dancer’s legs, and viewers were left to speculate on the rest of the package. 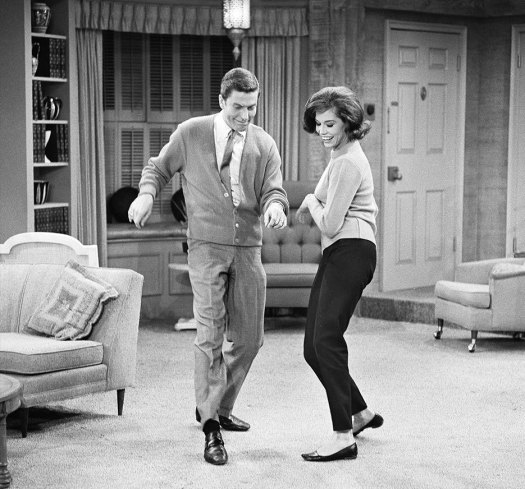 Then came THE DICK VAN DYKE SHOW (1961-66), a sophisticated (for its time) half hour about a comedy writer, based on Carl Reiner’s experiences working for Sid Caesar. Laura Petrie was, like Mary, a former dancer who met husband Rob while working for the USO. Mary’s singing and dancing skills were sometimes on display, but it was her comic timing with partner Van Dyke that earned her an Emmy for Best Actress. The pair was pure gold together, and they reunited several times after the series ended its run, including a memorable 2003 PBS adaptation of the stage hit THE GIN GAME. 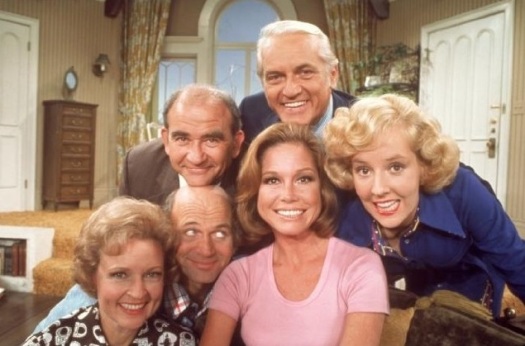 Mary made a few movies following THE DICK VAN DYKE SHOW, most notably 1967’s THOROUGHLY MODERN MILLIE with Julie Andrews and 1969’s CHANGE OF HABIT, Elvis Presley’s final film. She returned to the small screen in 1970, headlining her own sitcom THE MARY TYLER MOORE SHOW. As Mary Richards, a thirtysomething single girl who moves to Minneapolis and lands a job as associate producer of the local Six O’clock News program on fictional WJM, she was an independent working woman paying her own way through life, something rarely seen on weekly TV. The show featured what’s possibly the best supporting cast in sitcom history: there was gruff boss Lou Grant (Ed Asner), newswriter Murray Slaughter (Gavin McLeod), sarcastic neighbor Rhoda Morgenstern (Valerie Harper), bubbleheaded anchorman Ted Baxter (Ted Knight), man-hungry ‘Happy Homemaker’ Sue Ann Nivens (Betty White), upwardly mobile neighbor Phyllis Lindstrom (Cloris Leachman), and Ted’s sweet, naïve wife Georgette (Georgia Engel). All had the chance to strut their comedic stuff while level-headed Mary was the glue that held it all together. The series won 29 Emmys during its seven-year run, including three for Mary herself. 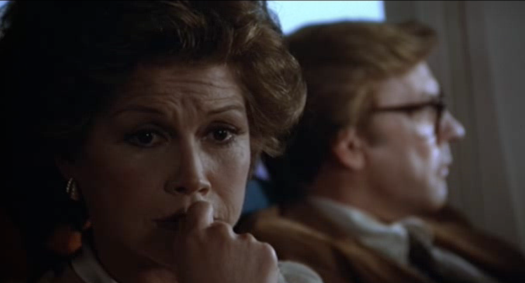 Mary never made it big in feature films, though she did receive a Best Actress Oscar nomination as the icy, uptight mother of a suicide victim in 1980’s ORDINARY PEOPLE, Robert Redford’s directorial debut. Television was her home, and she starred in popular TV movies like FIRST YOU CRY (1978), HEARTSOUNDS (1984, with James Garner), FINNEGAN BEGIN AGAIN (1985, with Robert Preston), and the 1988 miniseries LINCOLN, playing Mary Todd Lincoln opposite Sam Waterson’s President. She proved herself as adept at drama as she was with comedy in these roles. She had an abrupt change of pace in 2001’s LIKE MOTHER LIKE SON: THE STRANGE STORY OF SANTE AND KENNY KIMES, based on the true story of a murderous grifter and her equally homicidal son. But it’s still as America’s TV Sweetheart she’ll fondly be remembered for, the girl who “could turn the world on with her smile, who could take a nothing day, and suddenly make it all seems worthwhile”. Sweet dreams, Mary.

11 Replies to “You’re Gonna Make It After All: RIP Mary Tyler Moore”