The 1950’s were a time of change in movies. Television was providing stiff competition, and studios were willing to do anything to fend it off. The bigger budgeted movies tried 3D, Cinerama, wide-screen, and other optical tricks, while smaller films chose to cover unusual subject matter. The following five films represent a cross-section of nifty 50’s cinema: 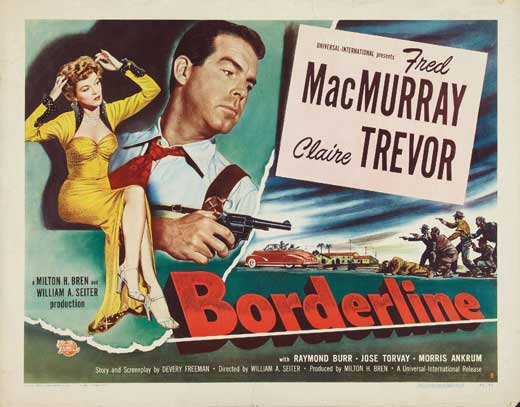 BORDERLINE is a strange film, straddling the borderline (sorry) between romantic comedy and crime drama, resulting in a rather mediocre movie. Claire Trevor plays an LAPD cop assigned to Customs who’s sent to Mexico to get the goods on drug smuggler Pete Ritchey (Raymond Burr , being his usual malevolent self). She’s tripped up by Ritchey’s rival Johnny Macklin (Fred MacMurray , channeling his inner Walter Neff), and taken along as he tries to get the dope over the border. What she doesn’t know is he’s also an agent, and thinks she’s a smuggler! The movie usually gets shoehorned into the noir category, but besides the drug smuggling angle, it’s just an average ‘B’ flick. Fun Fact: Claire’s husband Milton Bren was the film’s producer.

Highly influential ‘B’ noir about a tough cop escorting a mobster’s widow from Chicago to Los Angeles via train to testify on corruption, with hired killers onboard out to stop her by any means possible. Gruff-voiced Charles McGraw and sexpot Marie Windsor deliver Earl Fenton’s hard-boiled dialog with gusto; the film was Oscar-nominated for Best Story, but lost to THE GREATEST SHOW ON EARTH (they were robbed!). Director Richard Fleischer and DP George Diskant create a textbook example on how to make a tense, exciting movie for under $250,000, with a big plot twist I won’t spoil for those of you who haven’t seen this gem. The ambient sounds of the train travelling take the place of the usual music score, making the violence even more ultra-realistic. A must-see! Fun Fact: Marie Windsor was once a gag writer for Jack Benny. When the comedian finally met her in the flesh, he was stunned by her good looks and helped her secure a Hollywood contract. 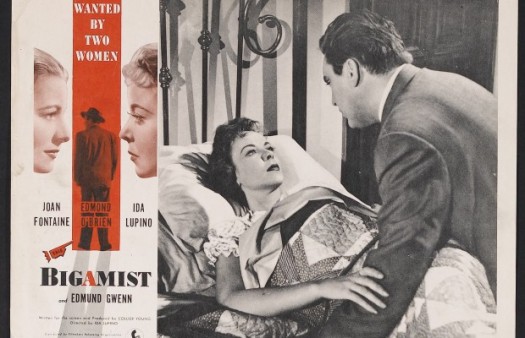 San Francisco couple Edmond O’Brien and Joan Fontaine want to adopt a child, but when the child welfare investigator (Edmund Gwenn) looks into the case, he discovers O’Brien has another wife (Ida Lupino) in LA. O’Brien gives a sympathetic performance as the man leading a double life, and Lupino handles the sensational material with depth and sincerity. Watch for the scene where O’Brien meets Lupino on a Hollywood tour bus for glimpses of the homes of stars Barbara Stanwyck, James Stewart, Jack Benny, and Gwenn himself! A quiet but powerful film that’s worth your time. Fun Fact: Producer/screenwriter Collier Young was married to Fontaine at the time; before that, he had been the husband of director/star Lupino! Ah, Hollywood! 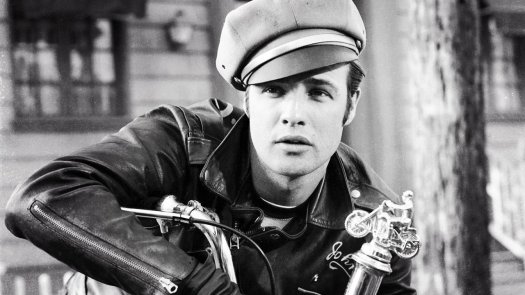 The granddaddy of all biker flicks! Marlon Brando is leather clad Johnny, leader of the Black Rebels MC, who terrorize a small California town. Brando’s existential, iconic performance dominates the film, but Mary Murphy is equally good as Kathie, the girl who falls for him. Lee Marvin also deserves a shout-out as Chino, leader of rival gang The Beetles. The scene where Murphy is chased down by the bikers, saved by Johnny, still retains its power. Jerry Paris, Alvy Moore , and that great oddball actor Timothy Carey are among the cyclists; Jay C. Flippen, Ray Teal, and Will Wright represent some of the “straight’ citizens. A bona fide cinema classic, not to be missed! Fun Fact: Brando’s Johnny was the basis for Harvey Lembeck’s goofball Eric Von Zipper character in all those “Beach Party ” movies.

13 year old Tuesday Weld makes her film debut as a teenybopper trying to raise money to buy a strapless evening dress for the prom, but you can forget about the dumb plot and enjoy a veritable Rock’n’Roll/Doo Wop Hall of Fame lineup: LaVerne Baker, Chuck Berry (“You Can’t Catch Me”), Johnny Burnett Trio, The Flamingos, Frankie Lymon & The Teenagers (“I’m Not a Juvenile Delinquent”), The Moonglows, Big Al Sears, and others, hosted by pioneering rock DJ Alan Freed. Tuesday’s vocals are dubbed by Connie Francis, and co-star Teddy Randazzo was a minor singing star who later wrote the hits “Goin’ Out of My Head” and “Hurts So Bad”. Lots of energetic teenage dancing; just sit back and have a foot-wiggling good time! Fun Fact: This was the first film for the production team Max Rosenberg and Milton Subotsky, better known for their Amicus horror anthologies.

31 Replies to “Cleaning Out the DVR Pt 11: Five from the Fifties”