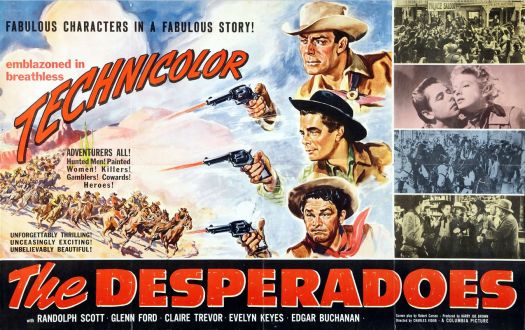 There’s a lot to like about THE DESPERADOES. Not that it’s anything groundbreaking; it’s your standard Western outing with all the standard clichés. you’ve got your two pals, one the sheriff (Randolph Scott ), the other an outlaw (Glenn Ford ). You’ve got your gambling hall dame (Claire Trevor ) and sweet young thing (Evelyn Keyes) vying for the good/bad guy’s attention. You’ve got your goofy comical sidekick (Guinn ‘Big Boy’ Williams). You’ve got your  supposedly respectable heavy (Porter Hall ), a mean heavy (Bernard Nedell), and a heavy who has a change of heart (Edgar Buchanan). What makes this one different is the movie seems to know it’s clichéd, giving a nod and a wink to its audience as it merrily makes its way down that familiar dusty trail.

Based on a novel by pulp writer Max Brand (who also created the Dr. Kildare series), this was one of Columbia’s big releases of the year, and their first in Technicolor. Charles Vidor, not usually associated with the sagebrush genre, directs with a light touch, even having some of his characters break the Fourth Wall on a couple of occasions. Robert Carson’s screenplay has a sense of humor and a definite touch of playfulness to . But don’t misunderstand, THE DESPERADOES is not a parody, the story’s taken seriously, and there’s plenty of action including a barroom brawl and a wild horse stampede. It just doesn’t take itself too seriously, and that’s the key to its success. 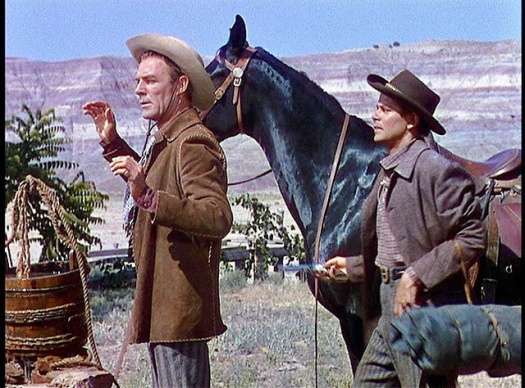 Randolph Scott is stalwart as always as the hero sheriff. By this time, he was already well-established as a Western star. This was his first film for producer Harry Joe Brown, and the pair would collaborate on a series of oaters in the late 1950’s that are among the genre’s best (THE TALL T, RIDE LONESOME, COMANCHE STATION). Most of those were directed by Budd Boetticher, who worked as an assistant director on this film.

A still-wet-behind-the-ears Glenn Ford plays the good/bad guy Cheyenne, alias ‘Bill Smith’. Ford was definitely on his way up in movies and, after serving in World War II, hit the jackpot with his role in another Vidor directed film, GILDA. Claire Trevor as The Countess does her patented bad-girl-with-a-heart-of-gold routine as Ford’s ex-gal, while Evelyn Keyes is her rival for his affections. Keyes would also win her man in real life, marrying director Vidor later that year. Edgar Buchanan had his loveable scoundrel part down pat by this time, a role he later perfected on TV’s PETTICOAT JUNCTION. Williams is goofy as ever, Hall as weaselly as ever, and there are fine bits by Raymond Walburn as a ‘hanging judge’ who loves his work so much he builds his own gallows, and Irving Bacon as the local bartender whose saloon gets wrecked more than his patrons.

The movie features some gorgeous Technicolor shots of Kanab, Utah’s beautiful landscapes by DP George Meehan, though most of it was filmed at the famed Corriganville Western Ranch. Familiar Faces like Joan Woodbury, Glenn Strange , Chester Clute, Francis Ford , Charles King, and a host of others dot the landscape as well. The cast of pros in gorgeous Technicolor and good-natured humor make THE DESPERADOES a must for classic movie lovers, even those non-Western fans among you. Just sit back and enjoy the ride, pardners.