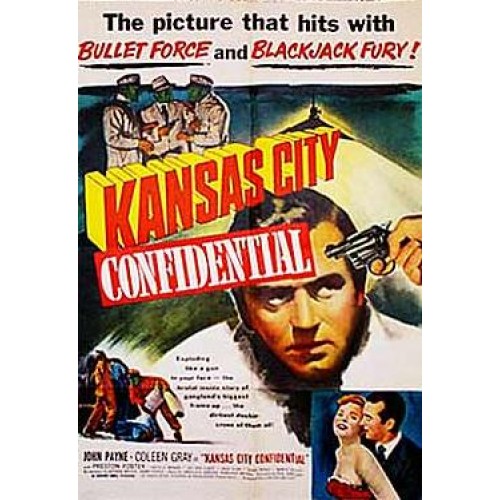 My friend Rob suggested I review KANSAS CITY CONFIDENTIAL awhile back, and I’m sorry I waited so long. This is a film noir lover’s delight, packed with tension, violence, double-crosses, and a head-turning performance by John Payne in the lead. Made on an economical budget like the same year’s THE NARROW MARGIN , director Phil Karlson and George Diskant create a shadowy, claustrophobic atmosphere brimming with danger at every turn.

I knew Payne mainly from his 40’s musicals and his idealistic lawyer opposite Maureen O’Hara in MIRACLE ON 34TH STREET, but he’s a revelation here as Joe Rolfe, a florist truck driver who’s set up as a patsy by a gang of armored car robbers. He can dish out (and take) beatings with the best them, and delivers the tough-talking dialog with aplomb. KANSAS CITY CONFIDENTIAL helped Payne shed his lightweight image, and he went on to do other dark crime films and rugged Westerns. I’ll definitely be keeping an eye out for them! 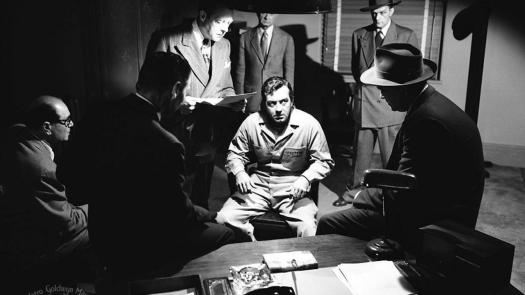 The plot isn’t overly complex: ex-cop Tim Foster. aka ‘Mr.Big’, hires three hoods to commit “the perfect crime”, a meticulously planned robbery in broad daylight. He insists all four of them wear masks so no one knows the other’s identity except himself. Timed to the last second, the caper goes off without a hitch, and Foster gives the goons each a torn-in-half king playing card, telling them he’ll contact them after the heat dies down to split the loot. Rolfe is grilled by the police, but ultimately let go when his alibi checks out. 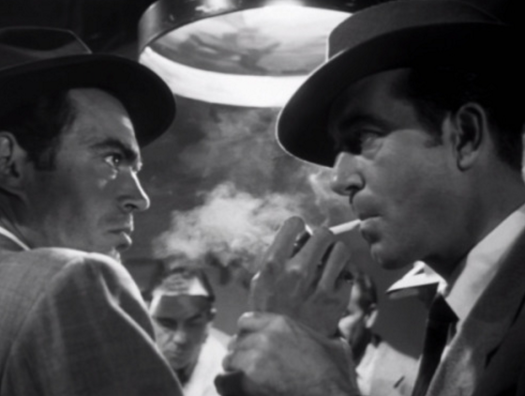 But he’s lost his job, and the now destitute Rolfe discovers there’s a 25% reward for finding the missing $1.2 million stolen in the robbery. Getting a hot tip from his bartender buddy, Rolfe flies to Tijuana and shadows Pete Harris, a degenerate gambler who may have been involved. He confronts Harris and beats the truth out of him, and is about to accompany the crook to Barados when Pete’s gunned down by the Mexican police at the airport. Rolfe then decides to impersonate Harris, since the gang have never laid eyes on one another. 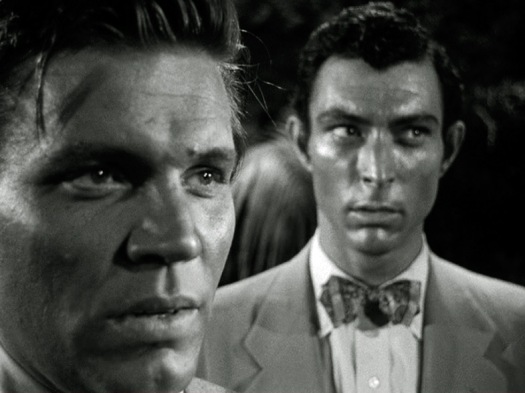 There he encounters Tony Romano and Boyd Kane, and after a suspicious Romano tosses his room, learns the pair were in on the heist. Foster is also at the resort, and we learn why he planned it all: after being forced to retire for backing the wrong politician, Foster plans to swerve the crooks and collect that  reward himself. Complicating things is Helen, Foster’s law student daughter, who arrived on the plane with Rolfe and is romantically interested in him. 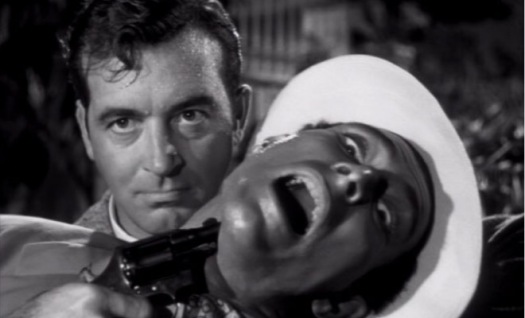 The violence is both realistic and graphic. I found the scene where Rolfe has Romano in a stranglehold, shoving a pistol under his chin, particularly brutal. Editor Buddy Small, son of producer Edward, keeps things tight, and Diskant’s black & white photography shows why he was one of the great noir cinematographers. Phil Karlson learned his craft directing Charlie Chan and Bowery Boys entries at Monogram, and made some solid 50’s noirs, including the ferocious THE PHENIX CITY STORY . He later remade KID GALAHAD with Elvis Presley, did a pair of Dean Martin/Matt Helm flicks, and the classic 1973 WALKING TALL. His career is well worth a look for film fans. 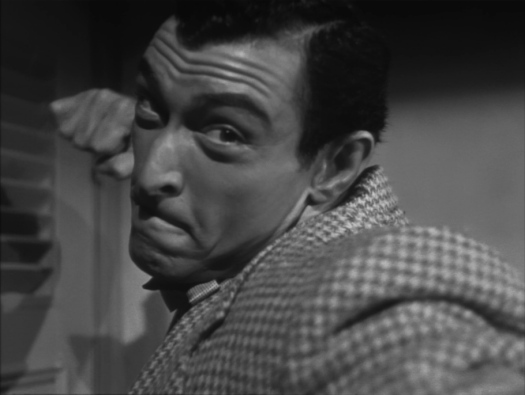 KANSAS CITY CONFIDENTIAL costars four of the screen’s baddest bad guys. Veteran Preston Foster gives heft to the role of Mr. Big, Jack Elam plays the chain-smoking Harris, oily Lee Van Cleef is womanizer Romano, and Neville Brand is chilling as the gum-chewing Kane. Pretty Coleen Gray rounds out the cast as Foster’s daughter Helen. Some of the plot elements here were reworked into Quentin Tarantino’s 1992 debut RESERVOIR DOGS; much as I liked that film, I think KANSAS CITY CONFIDENTIAL surpasses it. Thanks for the recommendation, Rob!