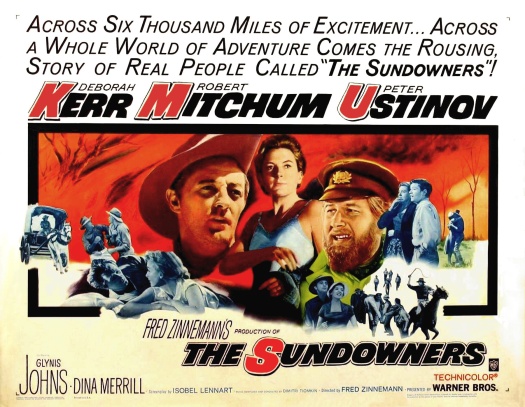 G’day, mates! Let’s take a trek through the wilds of 1920’s Australian outback with  , Robert Mitchum Deborah Kerr, and a herd of bouncing sheep in THE SUNDOWNERS. Fred Zinnemann, generally associated with serious, tense dramas like HIGH NOON and FROM HERE TO ETERNITY, lends a lighter touch than usual to this sprawling, almost John Ford-esque tale of an itinerant sheep drover and his family, and the wife who longs to settle into a home of her own.

Mitchum plays Paddy Carmody, a stubborn Irishman who has to keep moving, unable and unwilling to be tied to one place. He’s a wanderer with a fondness for booze and gambling, and Big Bob is perfect for the part. Mitchum’s penchant for dialects make his Aussie accent more than believable, and his facial expressions, especially during the sheep-shearing contest, are priceless. Deborah Kerr is his equal as wife Ida, the tough Earth Mother who’s loyal to Paddy but forever dreaming of a permanent home for them and son Sean (Michael Anderson Jr.). As good as Mitchum is, Kerr’s the heart of the film, and she was Oscar nominated for this performance, losing out to Liz Taylor in BUTTERFIELD 8. 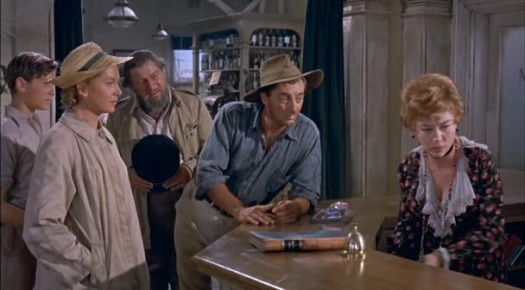 Peter Ustinov  joins them along the way as Briton Rupert Venneker, like Paddy a wandering soul, who becomes attached to the Carmodys. Ustinov, as always, shines in the supporting role of the vagabond Englishman, who meets a match of his own in chatty hotelier Mrs. Firth (Glynis Johns, who was also Oscar-nominated). Dina Merrill and Chips Rafferty are among the supporting cast, as are a number of less well-known Australian actors.

The colorful, scenic cinematography is by Jack Hildyard, who won an Oscar for BRIDGE ON THE RIVER KWAI, and whose work can be seen in HENRY V, CAESAR AND CLEOPATRA, THE VIP’S, and MODESTY BLAISE . Hildyard captures the hardscrabble back country wilderness with a keen eye, and kangaroos, koalas, and dingos pop up everywhere. The deadly forest fire scene is a highlight, as is the horserace later in the film. The delightful visuals are set to a marvelous Dimitri Tiomkin score.

THE SUNDOWNERS gathered five Oscar nominations in all, including Best Picture, Director, and Adapted Screenplay (Isobel Lennert ). It did not win any; in fact, the film did poorly here in the U.S., although it was a hit in Britain and Australia. It was only later, in part because of exposure through television, that it has come to be appreciated by many fans, including Yours Truly. It’s a warm, family oriented comedy-drama with beautiful location photography and top-notch performances by Mitchum, Kerr, and Ustinov. Fred Zinnemann made some of cinema’s finest films about the human condition, and THE SUNDOWNERS is one of them. It’s lighthearted tone is what probably keeps the cognoscenti from ranking it higher in Zinnemann’s body of work; to me, it’s worth reappraisal.

10 Replies to “The Land Down Under: THE SUNDOWNERS (Warner Brothers 1960)”