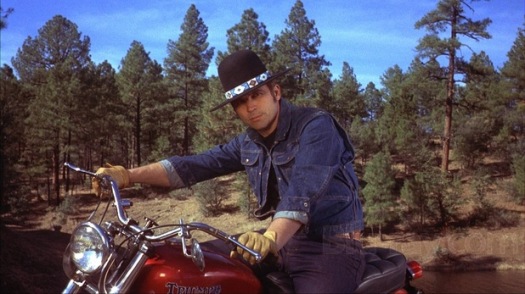 The theme song from Tom Laughlin’s BILLY JACK has quite a history behind it. First recorded by Canadian band The Original Caste in 1969, it became a #1 hit… in Canada! When Laughlin was making his picture, the song was re-recorded in 1971 by singer Jinx Dawson of the psychedelic occult-themed proto-metal group Coven. The Dennis Lambert/Brian Potter penned tune made it to #26 on the U.S. charts, but the film itself was poorly  distributed. Warner Bothers picked it up two years later, then Jinx and the band re-re-recorded the song, reaching #79 in 1973:

Coven made their debut with the 1969 LP “Witchcraft Destroys Minds and Reaps Souls”, featuring songs like “For Unlawful Carnal Knowledge”, “Dignitaries of Hell”, and the 13-minute opus “Satanic Mass”, which consists of ominous chanting and prayers to Satan in Latin! Coven is credited with introducing the “devil’s horns” sign to rock, later appropriated by virtually every heavy metal musician ever. Jinx and Coven are still around, having developed a cult following among metal maniacs via the Internet:

(BTW, tune in tomorrow for a look at the movie BILLY JACK!)