When I hear the word “Runyonesque”, I think about racetrack touts, colorful Broadway denizens, dames with hearts of gold, and the like. If you want to make a Runyonesque movie, what better way than to have author Damon Runyon himself produce it, as RKO did for 1942’s THE BIG STREET. All the elements are there, the jargon, the characters, but the film suffers from abrupt shifts in tone from comedy to drama, and a totally unpleasant role for Lucille Ball . The result is an uneven movie with a real downer of an ending.

Based on Runyon’s short story “Little Pinks”, it follows the unrequited love of bus boy Augustus “Little Pinks” Pinkerton for torch singing gold digger Gloria Lyons, dubbed “Her Highness” by Pinks. Henry Fonda plays Pinks as  lovestruck, spineless sad sack, dubbing Lucy Her Highness, even though she’s thoroughly rotten to him. When she’s smacked by her gangster boyfriend Case Ables ( Barton MacLane ) down the stairs and loses the ability to walk, she still treats Pinks like shit. The two leads aren’t very happy characters, and the movie suffers because of it. 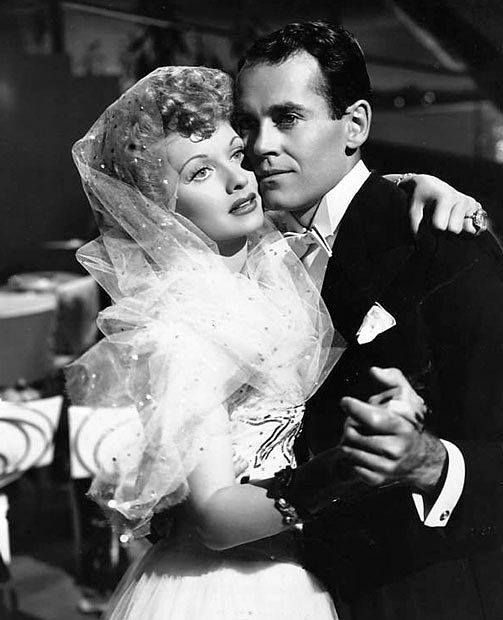 It’s Pinks who helps her the most, paying her hospital bills and willing to practically wheel her all the way to Miami (the scene they cause at the Holland Tunnel is a comic standout), yet Her Highness is just using the lowly bus boy, her only goal being to snag millionaire playboy Decatur Reed (William T. Orr, later a successful television producer for Warner Bros). I think it’s Lucy’s character that turned me off; even at the end (which I won’t spoil for those who want to watch), I didn’t have much sympathy for her. She’s a self absorbed, total bitch, especially in her treatment of those who care about her, and almost completely ruined the film for me.

The movie’s saving grace is the eccentric supporting cast that brings those trademark “Runyonesque” characters to vivid life. Ray Collins   and Sam Levene hit the bull’s-eye as a pair of erudite gamblers named Professor B and Horsethief. Eugene Pallette and Agnes Moorehead shine in the parts of Violette Shumberg and Nicely-Nicely Johnson, a “fat-and-skinny” odd couple (the Nicely-Nicely character would later pop up in GUYS & DOLLS, played this time by Stubby Kaye). Millard Mitchell   has an early role as retired hood Gentleman George. Among the other Familiar Faces around the big street you’ll find Louise Beavers, Hans Conreid, George Cleveland, Charlie Hall, Donald Kerr, Marian Martin, John Miljan, and Dewey Robinson. Ozzie Nelson and his Orchestra play in MacLane’s Miami nightclub, and look closely for Bess Flowers and a young Marie Windsor as faces in the crowd.

Director Irving Reis (THE BACHELOR AND THE BOBBY-SOXER, ALL MY SONS) had the unenviable task of balancing the bittersweet comedy-drama of Leonard Spielgass’s script, and isn’t quite up to it. Reis was fairly new in the director’s chair at the time, and those schizophrenic shifts from offbeat comical Runyonesque hoods to mean Lucy throwing shade at Fonda are quite jarring. Perhaps if director Reis had toned down Ball’s character a few notches and let Fonda lighten up a bit, I’d feel different. As it stands, I chalk it up as an interesting failure, but fans of Fonda, Ball, and Damon Runyon yarns will probably want to judge for themselves.