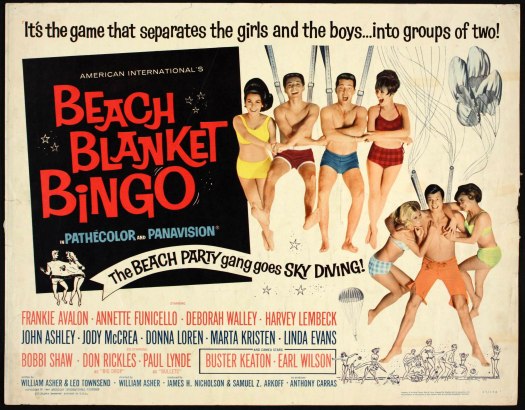 You’d think by the fourth entry in American-International’s ‘Beach Party’ series, 1965’s BEACH BLANKET BINGO, the formula would be wearing a bit thin. Frankie and Annette are still trying to make each other jealous, Eric Von Zipper and his Rats are still comic menaces, and the gang’s into yet another new kick (skydiving this time around). But thanks to a top-notch supporting cast of characters, a sweet subplot involving a mermaid, and the genius of comedy legend Buster Keaton , BEACH BLANKET BINGO is loads of fun!

Aspiring singer Sugar Kane skydives from a plan into the middle of the ocean and is “rescued” by surfer Frankie. But not really… it’s all been a publicity stunt by her PR agent ‘Bullets’. Sugar is played by lovely Linda Evans, right before she landed on TV’s THE BIG VALLEY, and ‘Bullets’ is none other than the fantastically sarcastic Paul Lynde. But wait… Eric Von Zipper (Harvey Lembeck) and his motley crew have spied Sugar, and the Head Rat immediately declares she’s “nifty”, and Sugar replaces his idol, “Marlo Brandon”. 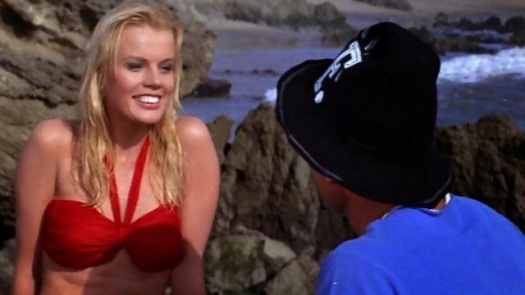 Frankie wants to try skydiving, and so does Dee Dee (our girl Annette, for those unfamiliar with the series), but macho Frank thinks a woman’s place is in the kitchen. The gang heads to Big Drop’s Skydiving school, run by ‘Mr. Warmth’, the late, great Don Rickles . Instructors Steve and Bonnie (real-life husband and wife John Ashley and the delectable Deborah Walley ) cause romantic complications for Frankie and Dee Dee, because that’s just the way things go in these films. Meanwhile, big goofy Bonehead ( Jody McCrea ) opts out of the skydiving scene, and winds up meeting and falling in love with Lorelei the mermaid, played by marvy Marta Kristen (LOST IN SPACE’s Judy Robinson).

Things get real (or about as real as they can in a drive-in flick) when Von Zipper kidnaps Sugar, only to be snatched from him by his no-goodnik pool hall pal South Dakota Slim (the one and only Timothy Carey !). Slim takes her to his “bubby” house (he calls everyone “bubby”) and ties her to a buzzsaw, resulting in a silent-film style slapstick ending straight outta THE PERILS OF PAULINE. That ending, along with other comic bits, was devised by Keaton, who’s Big Drop’s “assistant”, and it’s obviously the comedy master’s handiwork. Buster has some wonderful sight gags spread throughout the film, like having troubles casting his fishing line in the surf, chasing (and chased by) Bobbi Shaw along the seascape, doing his own crazy version of the watusi, and hanging from a tree limb during the sped-up race to Slim’s sawmill. Buster Keaton still did his own stunts here at age 69, and his dedication to his comic craft, even in a low-budget teen movie like this, is a testament to his considerable talents.

Lynde and Rickles each get to showcase their own comic personas, with Rickles doing some of his stand-up insult comedy while emceeing Sugar’s singing performance, and it’s one of the movie’s comic highlights (Don to Frankie: “You’re 43, Frank! You’re old!”). Donna Loren returns to sing “It Only Hurts When I Cry”, surf rockers The Hondells appear, and even Lembeck and his Rats get a musical number, “Follow Your Leader”. Famed (at the time) columnist Earl Wilson plays himself, 1964’s Playmate of the Year Donna Michelle is one of the surfer girls, and Michael Nader (later Evans’ costar on DYNASTY) is Frankie’s pal Butch. BEACH BLANKET BINGO is perfect for a hot summer night when you’re looking for some mindless laughs, with a bevy of beauties, harmless musical interludes, and some fine comedy from Lynde, Rickles, and especially Buster Keaton. Kowabunga!