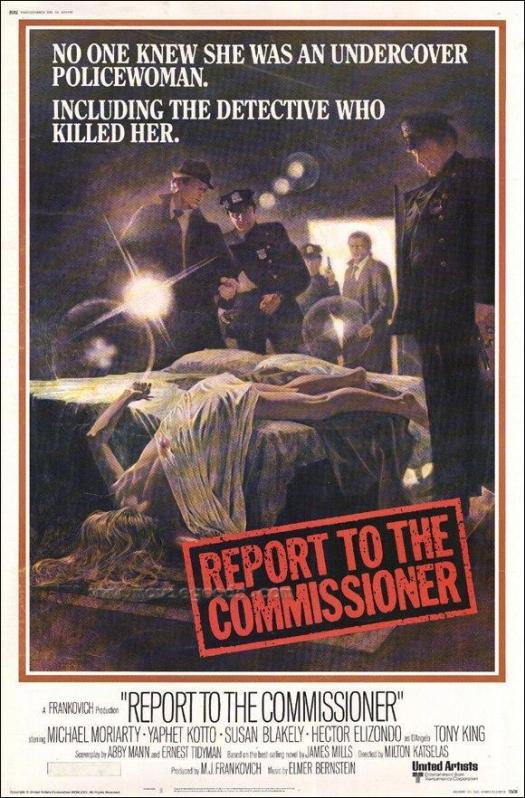 REPORT TO THE COMMISSIONER usually gets lumped in with the plethora of 70’s cop films, but I viewed it as a neo-noir. It’s structure tells the tale mainly in flashback, from the participating character’s differing perspective, and is dark as hell. I’m sure co-screenwriters Abby Mann and Ernest Tidyman were well aware of what they were doing: both men were former Oscar winners (Mann for JUDGEMENT AT NUREMBERG, Tidyman for THE FRENCH CONNECTION   ) familiar with the conventions of the genre. The solid cast features a powerhouse collection of 70’s character actors, led by Michael Moriarty’s patented over-the-edge performance as protagonist Bo Lockley.

Lockley is a young, idealistic cop caught up in circumstances beyond his control, snaring him in an inescapable downward spiral. The film opens with a pair of New York City detectives discovering the body of a young woman, who turns out to be one of their own, an undercover cop. Cut to a ruckus over at Saks’ 5th Avenue, where a disheveled Lockley, wrapped in a blanket, is being escorted from the building, charged with the murder, and put into the Bellevue Hospital Psych Ward. 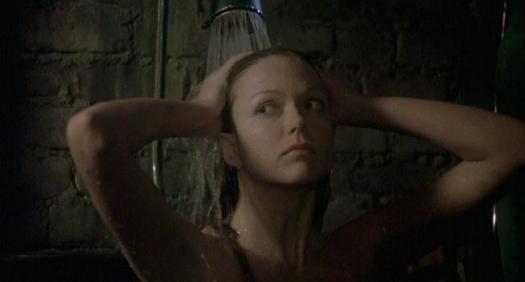 The sensationalistic papers cry “Scandal!”, and the Commissioner (Stephen Elliot) assigns Internal Affairs Captain Strichter (Edward Grover) to untangle the mess. Through flashbacks, we, along with Strichter, uncover the truth. Undercover cop Patty Butler (Susan Blakely in her finest screen performance), disguised as a runaway teen called ‘Chicklet’, had infiltrated the life of known drug dealer ‘Stick’ Henderson to the point of being his live-in lover, without the permission of the powers that be. Only her superiors Lt. Hanson (Michael McGuire) and Capt. D’Angelo (Hector Elizondo) are aware she’s this deep undercover. 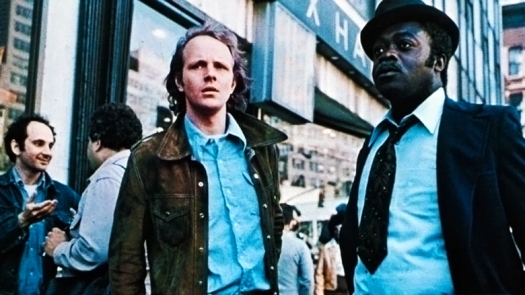 Hanson and D’Angelo look for a patsy to search for the missing “runaway”, and land on Lockley, a NYC Police ‘legacy’ who’s ill-suited to the job. Lockley’s been working with veteran ‘Crunch’ Blackstone (the amazing Yaphet Kotto), trying to learn the ways of the streets. The two men take different approaches to the job, with Blackstone’s pork-pie hat wearing, hard-assed cop a direct contrast to the compassionate, long-haired Lockley. Still, the older man develops a fondness for the naïve youngster.

Lockley takes his new assignment seriously, and almost blows Butler’s cover at a disco. He diligently tracks her to Stick’s apartment, where he discovers a cache of weapons slated for use by a black radical group. The cop and the dealer engage in a shoot-out, where Butler takes a fatal bullet from Lockley’s erratic barrage. A chase over the rooftops winds up with Lockley and Stick trapped in an elevator, surrounded by the law, with no chance of escape.

Michael Moriarty’s unhinged performance as Lockley foreshadows his work in Larry Cohen’s Q: THE WINGED SERPENT and THE STUFF. His Lockley is ill-suited for the job, and doesn’t understand that, as his mentor Crunch tells him, “Nothing is what it seems”. Tony King, the ex-football player who later became head of security for hip-hop legends Public Enemy, adds his menacing presence as Stick. Among the other Familiar Faces you’ll find Bob Balaban excelling as a legless street person, Richard Gere making his film debut as a lowlife pimp, and William Devane, Bebe Drake-Hooks, Dana Elcar, and Vic Tayback.

REPORT TO THE COMMISSIONER was directed by Milton Katselas, more known as a Broadway producer/director and acting coach, whose filmography includes FORTY CARATS, BUTTERFLIES ARE FREE, and WHEN YOU COMIN’ BACK, RED RYDER?. He’s also known as a hard-core Scientologist, and was portrayed in the biopic SAL (about the actor Sal Mineo) by that film’s director, James Franco (which I’m sure my TSL colleague Lisa Marie Bowman will be interested in!). Cinematographer Mario Tosi (CARRIE, THE STUNT MAN) captures the gritty Times Square street life with a dark, gloomy eye, and Elmer Bernstein contributes a fine, sometimes even funky score. The neo-noir atmosphere and outstanding cast make this an interesting if not quite classic film that deserves a second look.

6 Replies to “Concrete Jungle: REPORT TO THE COMMISSIONER (United Artists 1975)”