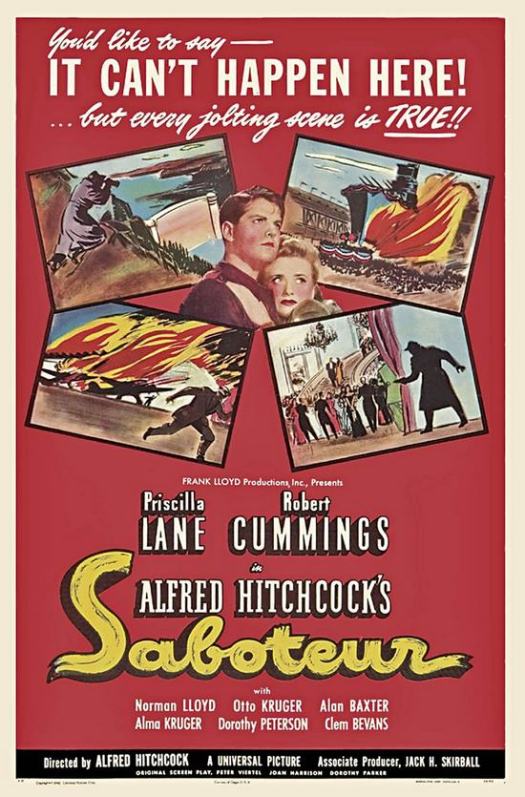 The Master of Suspense puts the pedal to the metal once again in SABOTEUR, another “double chase” spy thriller that doesn’t get the attention some of Alfred Hitchcock’s other films do, but should. I’ve always enjoyed the performance of Robert Cummings as the “ordinary man caught in an extraordinary situation”; his naturally laid-back, easygoing charm makes him perfect playing Barry Kane, accused of sabotaging a wartime aircraft plant and killing his best friend in the process, who winds up on a cross-country chase alongside reluctant heroine Priscilla Lane . SABOTEUR is certainly an  important film in Hitchcock’s body of work for one very important reason: it’s the director’s first film for Universal Pictures, a studio he’d have a long and profitable association with, and where he’d later create some of his finest movies. 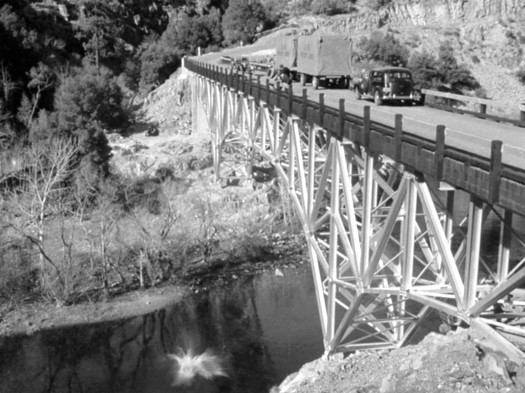 SABOTEUR is in many respects a loose remake of Hitchcock’s THE 39 STEPS , transplanted to America and updated to reflect the (then) current global conflict. Like the previous film, the protagonist is hunted by both the police and a dirty gang of Fifth Columnist spies. The heroine is suspicious of him, thinking the worst, but eventually coming around to believe his story. The spies, led by suave Otto Kruger , are all wealthy, urbane types. There’s an isolated cabin in the woods echoing the Scottish farm Robert Donat hides out in, but the gender roles of it’s occupants are reversed. Here, blind Uncle Phillip (Vaughn Glaser) is sympathetic to Kane’s plight, while niece Patricia (Lane) wants to turn him over to the authorities. Kane makes his escape from the law by jumping off a high bridge into the river below, and the scene in a movie theater, with the real saboteur (Norman Lloyd, who also serves as the movie’s McGuffin) causing a panic, is equivalent to the scene in the music hall featuring the unforgettable Mr. Memory (sorry, couldn’t resist the pun!).

Despite these similarities, SABOTEUR stands on its own as a damn good thriller. My favorite scene has Cummings, with Lane forced to accompany him on the lam, hopping on the last truck in a circus caravan. The truck is occupied by a group of sideshow freaks: The Human Skeleton (Pedro de Cordoba), The Fat Lady (Marie LeDeaux), The Bearded Lady (Anita Bolster), a belligerent midget (Billy Curtis ), and a pair of Siamese twins (Jean Romer, Laura Mason). Seeing the shackles still on Cummings’ wrists, with Lane patiently by his side, they debate whether or not to turn him in when the cops pull the caravan over. The midget says yes, the twins are split, and the fat lady sits on both sides of the issue. The Bearded Lady and the Skeleton Man have the deciding votes, and elect to help Cummings hide from the law. The scene is both funny and poignant, as these outcasts of society show compassion toward their fellow humans, and one of my favorites in the Hitchcock canon. 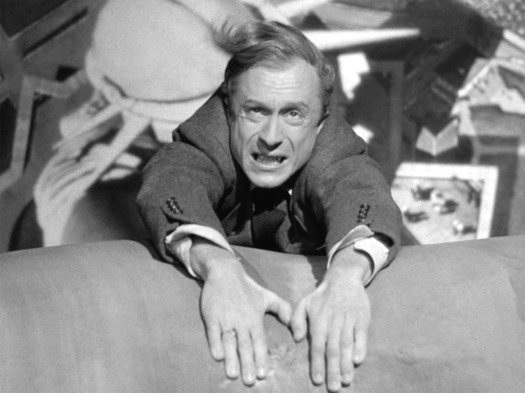 The freaks stand in sharp contrast to the Fifth Columnists, men and women of wealth and stature who wish to do harm to their country for the cause of totalitarianism. Kruger is all Cheshire Cat smiles as Charles Tobin, leader of this rat’s nest. Norman Lloyd’s Frank Fry was the first of a long association between the actor and Hitchcock; he appeared in SPELLBOUND, then served as a producer (184 episodes), director (22), and actor (6) on the Master of Suspense’s long-running TV anthology series. I’m happy to report Norman Lloyd is alive and well as of this writing at the ripe old age of 102! (My favorite Lloyd role was his Dr. Auschlander on the series ST. ELSEWHERE from 1982-88). Alan Baxter , Alma Kruger, Clem Bevans, and Ian Wolfe are among the co-conspirators on the wrong side of history. 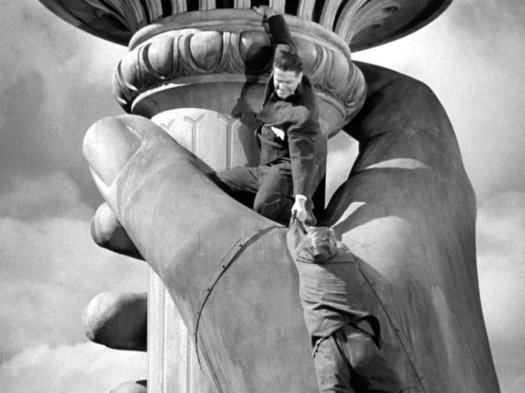 The most famous (and probably most discussed) scene in SABOTEUR is undoubtably the Statue of Liberty scene  where Fry, after his escape from the movie theater, hops the ferry to Liberty Island. He’s unknowingly followed by Patricia, who tries to stall him until Kane and the authorities arrive. Fry heads to the viewing platform, pursued by Kane, and they engage in a struggle that finds Fry hanging on for dear life. Kane has him by the sleeve as the cops make their way to the top, but the sleeve rips, hurtling Fry to his doom. Jack Otterson’s art department created a striking replica of Lady Liberty, and actual footage filmed in New York was rear projected and made to look eerily real by Universal’s resident special effects wiz John P. Fulton . The scene is tense, taut, and typically Hitchcockian! 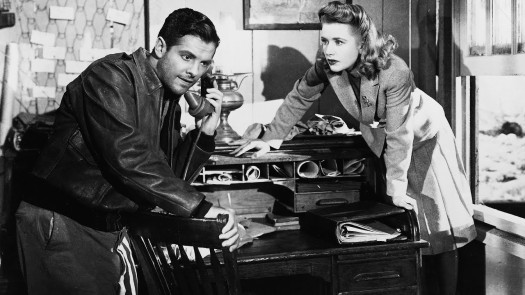 The screenplay by Peter Viertel, Joan Harrison, and Dorothy Parker is humorous and exciting, with plenty of patriotic fervor reflecting the wartime atmosphere. Cummings and Lane, though not Hitchcock’s first choices, make a fine romantic duo, and Kruger has never been slimier as the main villain. And yes, Hitchcock has his traditional cameo in the film; I’m just not going to tell you where or when. For that, you’ll have to watch SABOTEUR for yourselves, and I can guarantee you won’t be disappointed!