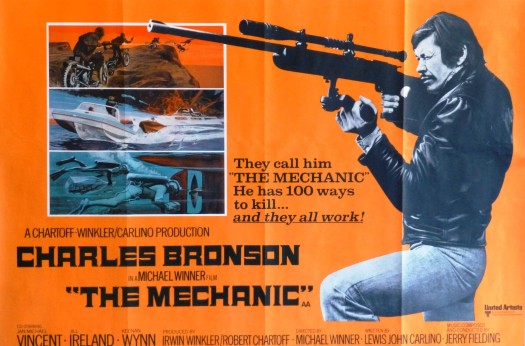 Stone-faced Charles Bronson is perfect as an ice-cold, classical music loving hit man who mentors young Jan-Michael Vincent in 1972’s THE MECHANIC. I’d say this is one of Charlie’s best 70’s actioners, but let’s be serious – they’re ALL damn entertaining!

Arthur Bishop (Bronson) takes his work seriously, meticulously planning every assignment he receives from his Mafia boss (Frank De Kova ). Given a job to kill family friend Big Harry McKenna (Keenan Wynn), Bishop does the deed with chilling precision. McKenna’s son Steve (Vincent) is a stone-cold sociopath himself, and soon worms his way into becoming Bishop’s apprentice. Their first caper together goes sour, bringing Bishop’s boss much displeasure. Bishop’s next hit takes the two overseas to Naples, where they’re set up to be killed themselves, resulting in a violent conclusion and a deliciously deadly twist ending. 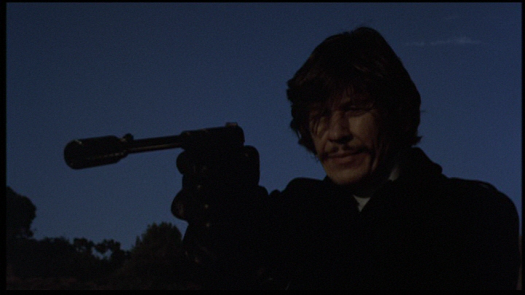 Bronson, after over twenty years and 50 plus movie roles, became an overnight success with the same year’s THE VALACHI PAPERS. He’s his usual stoic self as Bishop, but the character has a bit more depth. Bishop is prone to anxiety attacks, and trouble forming a meaningful relationship, causing him to visit a call girl (wife Jill Ireland in a cameo), paying her to read him love letters before sex. Bishop’s bonding with young McKenna was originally homosexual in nature as envisioned  by screenwriter Lewis John Carlino (THE SAILOR WHO FELL FROM GRACE WITH THE SEA, THE GREAT SANTINI), but producers Robert Chartoff and Irwin Winkler (the ROCKY films) nixed the idea. Still, the relationship between Bishop and McKenna comes off almost as intended, as Bishop doesn’t seem to respond to anyone else, including the hooker.

Jan-Michael Vincent is good as the antisocial McKenna, and makes me wish he and Bronson had done more films together. Vincent is well known to fans of 70’s flicks for his roles in the TV Movie TRIBES, the Disney comedy THE WORLD’S GREATEST ATHELETE, and a slew of drive-in fare: WHITE LINE FEVER, BABY BLUE MARINE, VIGILANTE FORCE, DAMNATION ALLEY, and DEFIANCE. He played Robert Mitchum’s son in the miniseries THE WINDS OF WAR, then headlined his own action series AIRWOLF from 1984-87. Vincent’s problems with alcohol and domestic violence have been well documented, and the actor, who lost a leg in a car crash, is now for the most part retired and living in Mississippi. 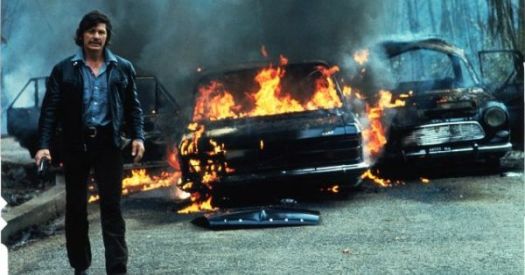 THE MECHANIC is the second of six films Bronson made with director Michael Winner, the last three being the first entries in the DEATH WISH series. Winner delivers (sorry, I can’t resist!) a winner here, keeping the suspense taut and the action exciting, including a cool dirt bike chase and the later scene with Bronson and Vincent chased by mobsters through a winding Italian mountain road. The film was remade in 2011 with Jason Statham in the Bishop role (and a sequel in 2016), which paled in comparison to this drive-in classic. Bronson and Winner’s DEATH WISH has been remade and is set for release this November, with Eli Roth directing and Bruce Willis in Bronson’s role. The trailer looks good, but like THE MECHANIC, it’ll be hard to top the original. We shall see…