Groundbreaking 60’s films like BONNIE & CLYDE, THE GRADUATE, THE WILD BUNCH, and MIDNIGHT COWBOY led to the complete obliteration of the Production Code, and by the sizzling 70’s it was anything goes! Low budget exploitation filmmakers benefitted most by this loosening of standards as the following quintet of movies illustrates, filled with bouncing boobs, bloody action, pot smoking, beer drinking, and hell raising: 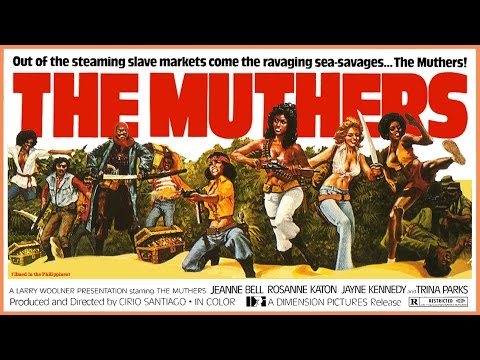 THE MUTHERS (Dimension 1976; D; Cirio H. Santiago) – A Filipino-made “Women in Prison” Blaxploitation actioner? Yes, please! Former Playboy Playmates Jeanne Bell and Rosanne Katon, future NFL TODAY commentator Jayne Kennedy, and ex-Bond girl Trina Parks are all trapped on a coffee plantation run by the sadistic Monteiro with no chance of escape… until there is! Loaded with gore, torture, kung-fu fighting, bare breasts, a funky score, pirates (that’s right, pirates!), and a slam-bang run through the jungle – what more could you ask for? Forget about some of the gaps in logic, just sit back and enjoy the ride. Fun Fact: The prolific Santiago produced and/or directed such Grindhouse classics as WOMEN IN CAGES, THE BIG BIRD CAGE, TNT JACKSON, EBONY IVORY & JADE, and VAMPIRE HOOKERS, among many others. 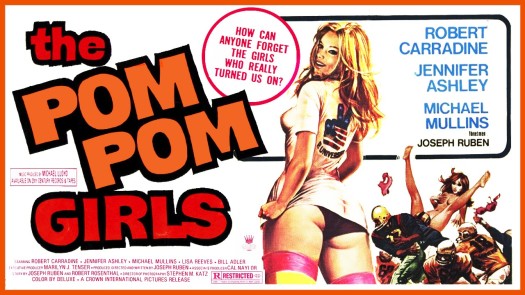 THE POM POM GIRLS (Crown International 1976; D: Joseph Ruben)- One of the better Crown International “teensploitation” flicks is a practically plotless but immensely fun outing dealing with the high school shenanigans of football players’n’cheerleaders, featuring a pre-REVENGE OF THE NERDS Robert Carradine as the school’s “class stud” and the ever-delightful Rainbeaux Smith as (what else?) a swingin’ cheerleader. Writer/director Ruben throws in every teen flick trope in the book: food fights, dirt bikes, a groovy “love van”, a football brawl, and a “suicide chicken” race straight outta REBEL WITHOUT A CAUSE! There’s plenty of gratuitous nudity and hormones running wild on display, so if drive-in movies are your thing, you can’t do much better than this one. Fun Fact: Ruben went on to helm the mainstream films SLEEPING WITH THE ENEMY and MONEY TRAIN.

VIGILANTE FORCE (United Artists 1976; D: George Armitage) – Crack open a frosty PBR and enjoy this slice of 70’s exploitation insanity. The small California town of Elk Hills is being torn up by rowdy oil field workers, so Jan-Michael Vincent recruits his Vietnam vet brother Kris Kristofferson and his crew to clean things up. But Kris has other ideas, and soon he and his boys take over the town, beginning a reign of terror that leads to a violent, explosive climax with Kris’s vigilantes pitted against Jan-Michael’s Green Mountain Boys. Kris is one crazy, mean sumbitch in this wild actioner! Bernadette Peters shines as his sexy off-key saloon singer girl, and Victoria Principal plays Jan-Michael’s more sedate sweetie (who takes a bullet in the back courtesy of Kris… I told you he was mean!). The better-than-average supporting cast is filled with Familiar Faces: Loni Anderson (as ‘Peaches’!), Antony Carbone, Peter Coe , Brad Dexter , David Doyle (Bosley on CHARLIE’S ANGELS), Paul Gleason, James Lydon, Shelley Novack, Andrew Stevens, and a cameo by the one-and-only Dick Miller ! Hang on to your hardhats and get ready for non-stop action. Fun Fact: The producer is exploitation king Roger Corman’s brother Gene, which explains Miller’s cameo and the casting of Carbone (THE LAST WOMAN ON EARTH, CREATURE FROM THE HAUNTED SEA).

CORVETTE SUMMER (MGM 1978; D: Matthew Robbins) – High school student Mark Hamill restores a ’73 Corvette Stingray to it’s former glory only to have it stolen, so he hitches a ride to Las Vegas with wanna-be hooker Annie Potts to retrieve his baby in this uneven but harmless ‘B’ comedy. The film shifts into high action towards the end, and the finale doesn’t really satisfy, but Potts (in her film debut) delivers a wonderfully deft comic performance as the ditzy chick in yet another 70’s-style “love van” (they were everywhere!!). The supporting cast includes Danny Bonaduce, Philip Bruns, Eugene Roche, Kim Milford, and the ubiquitous Dick Miller! The glittery lights of late 70’s Vegas (set to a glittery disco soundtrack) make it almost worth your time. Fun Fact: This was Hamill’s follow-up to 1977’s STAR WARS , attempting to break free of his Luke Skywalker image. It didn’t work.

More “Cleaning Out the DVR”: