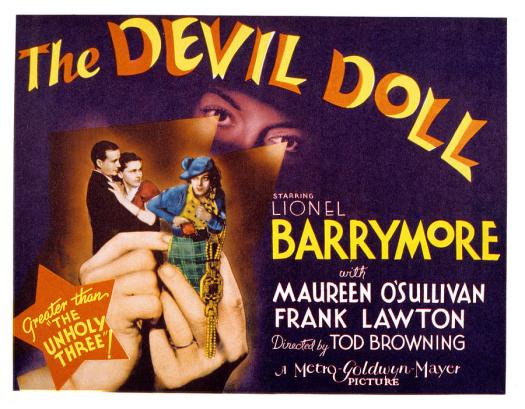 Producer/director Tod Browning’s THE DEVIL DOLL is a film reminiscent of his silent efforts with the great Lon Chaney Sr. This bizarre little movie doesn’t get the attention of Browning’s DRACULA or FREAKS ,  and the ending’s a bit on the sappy side, but on the plus side it features Lionel Barrymore dressed in drag for most of the time, some neat early special effects work, and a weird premise based on a novel by science fiction writer A. Merritt, adapted for the screen by Guy Endore, Garrett Ford,  and Erich von Stroheim (!!).

Barrymore stars as Devil’s Island escapee Paul Lavond, and he pretty much carries the picture. Lavond and fellow con Marcel (Henry B. Walthall ) make it to Marcel’s home, where wife Melita (a pop-eyed Rafaela Ottiano) has been keeping the faith on her hubby’s experimental work… turning animals miniature, to solve the coming food shortage and better mankind. But their brains shrink too, and the critters can only act when a human imposes their will on them (by thinking real hard, apparently).

Servant girl Lachna (Grace Wood), an “inbred peasant halfwit”, is next in line for testing, but when things go awry, Marcel dies of a heart attack. Lavond takes this opportunity to travel with Melita and (now) tiny Lachna to Paris, to exact revenge on the three banking partners who framed him for embezzlement and murder. Posing as the elderly dollmaker “Madame Mandilip”, Lavond goes after his crooked former friends, hoping to win back the love and respect of daughter Lorraine (Maureen O’Sullivan ), who grew up hating her convicted criminal father. 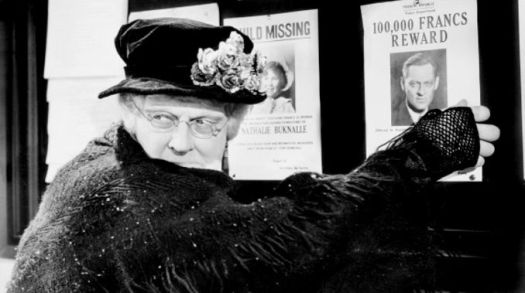 Like Chaney Sr. in Browning’s THE UNHOLY THREE, Barrymore is more than convincing as the old woman, and seems to be having a field day all bundled up in ladies’ garments. His tour de force performance is what makes THE DEVIL DOLL worth watching, as sadly the rest of the cast is lacking. Ottiano overacts as Melita, Frank Lawton is bland as Lorraine’s cabbie beau Toto, Walthall is wasted (and looks terrible; he died a month before the film’s release), and bad guy bankers Robert Greig, Arthur Hohl, and Pedro de Cordoba are stereotype villains. Only O’Sullivan as Barrymore’s daughter and Ford as the shrunken Lachna shine in their supporting roles. Look real quickly for a blink-and-you’ll-miss-it bit by comedian Billy Gilbert as a butler… I’m wondering if he originally had a bigger part that got cut from the movie. Any film fans know the answer to this mystery? 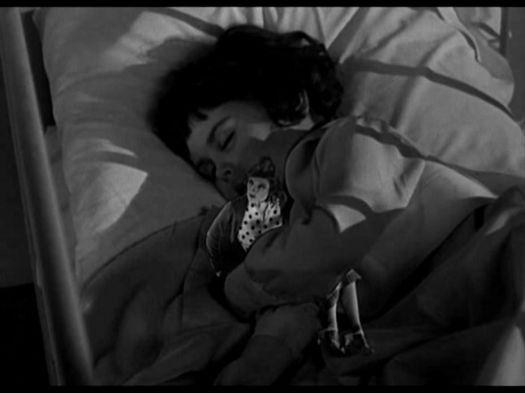 The special effects can best be described as “early Bert I. Gordon“, done with superimposing and rear projection. No doubt cutting edge for their time, they don’t stand up nearly as well as John P. Fulton’s work for Universal or Willis O’Brien’s marvelous KING KONG . THE DEVIL DOLL isn’t on a par with the best horrors of the 30’s, but curious fans of Tod Browning and/or Lionel Barrymore will want to take a look. Browning would make one more film, 1939’s MIRACLES FOR SALE , before retiring. Barrymore continued his thespic career as cranky Dr. Gillespie in the ‘Dr. Kildare’ films, and he’s fondly  remembered for his role as mean Mr. Potter in IT’S A WONDERFUL LIFE. Now Henry Potter… that was one really scary dude!