Director Edgar G. Ulmer made some astounding contributions to the horror/sci-fi genres: THE BLACK CAT, BLUEBEARD, THE MAN FROM PLANET X . Unfortunately, THE AMAZING TRANSPARENT MAN isn’t among them. The below-low budget movie (shot on location in Dallas simultaneously with BEYOND THE TIME BARRIER) tries to throw too many things at the wall, and nothing really sticks, thanks to a weak script and short 57 minutes running time.

Ulmer does show flourishes of his brilliance in the opening scene, where safecracker Joe Faust breaks out of prison, is chased by hounds through the woods, and is met by a woman who drives him to a deserted looking, isolated farmhouse. But by this time, he had been beaten down from years of Poverty Row work with little to no recognition, and you can tell Ulmer just took the money and ran with this one.

The woman is Laura Matson, one of a nest of spies led by ex-Army Major Kremmer. Faust is told “eminent nuclear scientist” Dr. Ulof is experimenting with “fissionable materials” in order to create an “invisible army” and take over the good ol’ USA! Kremmer needs Faust’s expertise to steal the volatile atomic X-13 element. Faust performs the dirty deed, then decides to go into business for himself, and with Laura as his accomplice robs a bank… then suddenly rematerializes in mid-heist!

The scenes where Faust becomes invisible are shot from his POV, and finds the other actors flailing about as if they’re being punched. It’s pretty silly looking, trust me. The transformation special effects by Roger George aren’t half bad as these sort of things go, but the grand finale, with Faust and Kremmer battling in the lab, ends with stock footage of an A-bomb explosion! So is the movie sci-fi, crime, or a thinly disguised anti-nuke screed? Like I said, nothing really sticks. 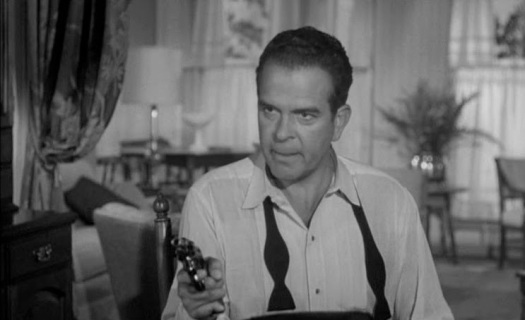 Character actor Douglas Kennedy (Faust) snarls and growls and basically chews the scenery. Marguerite Chapman (Laura) is best known for the 40’s serial SPY SMASHER. James Griffith (Kremmer) pops up frequently in movie and TV Westerns as a bad guy. Ivan Triesault (Ulof) appeared in CRY OF THE WEREWOLF and THE MUMMY’S GHOST. Pat Cranshaw, who most of you know as the sheriff in the AIR BUD movies and countless sitcom roles as an old codger, makes his debut as a security guard. Veteran Universal make-up genius Jack Pierce gets a credit, but he doesn’t create anything memorable. Like Ulmer, he probably just took the money and ran.

The dialog in Jack Lewis’s script features exchanges like this: Ulof: “Why do you ask these questions?” Faust: “Because I want answers!” Literary gold, this is not! It’s all a mishmash of ideas that never really gels. Ulmer went on to make two more films (1961’s JOURNEY BENEATH THE DESERT and 1964’s THE CAVERN) before his death in 1972. His filmography (especially his noir masterpiece DETOUR ) deserves to be reexamined, but unless you’re a completest, cross THE AMAZING TRANSPARENT MAN off your list.