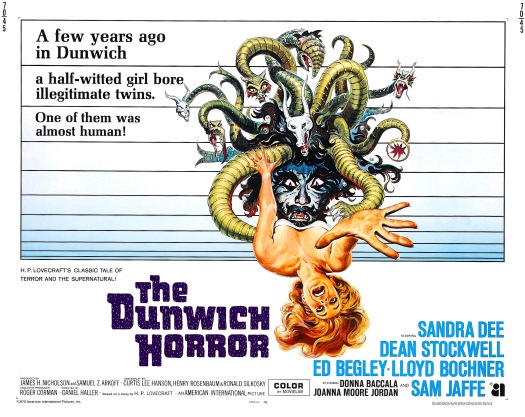 THE DUNWICH HORROR is another film I saw when it was first released, on a double bill with the Spaghetti Western GOD FORGIVES, I DON’T. Unfortunately, this one fails to stand the test of time, with it’s trippy special effects and a somnambulant performance by Dean Stockwell , who was pretty obviously stoned out of his gourd during the shooting. 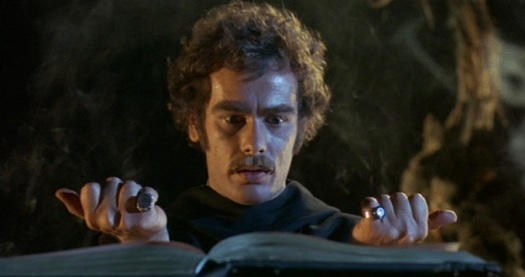 Professor of the occult Henry Armitage is lecturing on the Necronomicon, a book said to hold the key to the gate to another dimension, where a race of monsters known as “the old ones” dwell. Creepy Wilbur Whateley, great grandson of occultist Oliver, shows an abonrmal interest in the book. In fact, Wilbur wants to possess the Necronomicon to bring “the old ones” back to rule the Earth once again. To achieve this, he pretty much kidnaps and drugs student Nancy Wagner, hoping to use her in a bizarre sex ritual that will unlock that gate. Nancy’s friend Elizabeth, concerned about her well-being, goes to the Whateley house to find her, only to be attacked by Wilbur’s twin brother, who’s a demon from beyond!  Some nefarious doings cause the townspeople to storm Wilbur’s property, where Armitage and Whateley engage in an occult battle that results in the end of the Whateley line… or does it?? 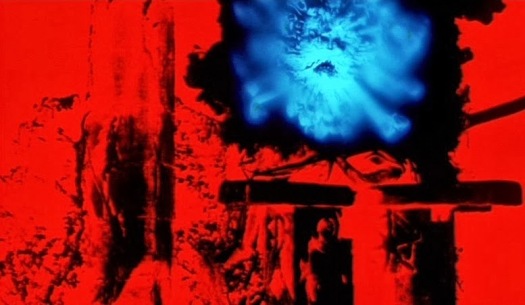 This wasn’t director Daniel Haller’s first shot at helming a film based on the writings of H.P. Lovercraft. In 1965, Haller directed his first film, DIE, MONSTER, DIE, based on Lovecraft’s “The Colour Out of Space”, starring the immortal Boris Karloff. THE DUNWICH HORROR features color filters and distorted lens to convey the horrors from the other side, but they come off like bad outtakes from executive producer Roger Corman’s LSD extravaganza THE TRIP , causing the film to feel dated. Though there are some scary scenes, they’re few and far between. 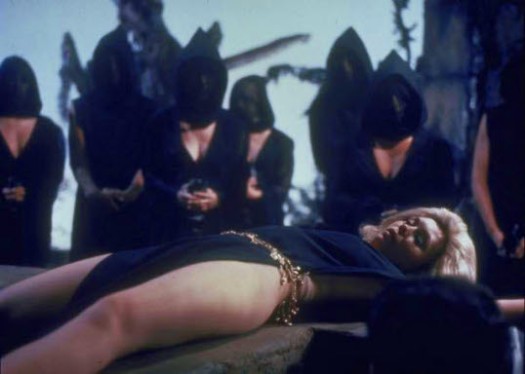 Stockwell sleepwalks through the role of Wilbur Whateley, as he did for most of his performances of the era. That’s understandable, as during this time he was involved in the hippie/drug scene and hanging out with the likes of Dennis Hopper and Neil Young. Sandra Dee (Nancy) is equally dull, although she has an excuse, her character having fallen under the spell of Wilbur’s occult powers (and drugs!). Dee makes the movie seem like it could be subtitled GIDGET GOES TO HELL! This was the last film for veteran Ed Begley (Armitage), who at least lends some dignity to the proceedings, despite spouting gibberish in that fatal final battle with Stockwell. The same can’t be said for Sam Jaffe, playing Wilbur’s grandpop, who overacts mercilessly.

Other Familiar Faces include Donna Baccala, Lloyd Bochner , AIP stalwarts Beach Dickerson and Barboura Morris , Talia Shire (her 2nd film appearance), and Jason Wingreen. I really liked THE DUNWICH HORROR when I first saw it, and wanted to like it again. But I just can’t recommend it; there are tons of other, better horror films to watch this Halloween season. Unless you’re as stoned as Stockwell was when he made it – then you just may dig it!