I last discussed France’s le cinema fantastique two years ago today with a look at EYES WITHOUT A FACE . Now let’s return to the land of “Liberte’, equalite’, fraternite'” and take a trip back to 1955’s DIABOLIQUE, Henri-Georges Clouzot’s masterpiece of psychological horror starring Simone Signoret that can compete with any Alfred Hitchcock film in the spine-tingling suspense department. In fact, Hitchcock himself wanted to secure the rights to the book by Pierre Boileau and Thomas Narcejac that DIABOLIQUE is based on, but Clouzot beat him to it! 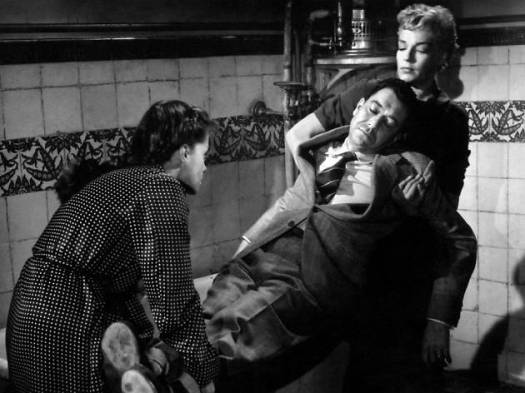 Michel Delassalle (Paul Meurisse) is the cruel principal of a boarding school owned by wife Christina (Vera Clouzot), a weak woman with a heart condition whom he constantly berates. He also has a mistress, teacher Nicole Horner (Signoret), sporting a black eye from the bastard. The two women know about each other, with Michel lording his power over them. Christina and Nicole have had enough though, and conspire to do the prick in over the school holiday. Nicole has devised an ingenious plan to lure him away, having Christina call and tell Michel she wants a divorce. Not wishing to lose his meal ticket, he goes to Nicole’s apartment in Niort, where he’s drugged with a bottle of Johnnie Walker and drowned in the bathtub. They cart Michel’s body in a wicker basket back to the school and dump it in the swimming pool, but when it doesn’t emerge they scheme to have the pool drained. The body has vanished, and strange things then begin to happen: the suit Michel was wearing is delivered home from the dry cleaners, a little boy tells them the principal caught him breaking a window, and the annual school picture shows Michel’s ghostly face in a window!

Clouzot keeps the suspense ratcheted tight as a drum, turning the screws ever so slowly until the haunting finale, with a triple twist ending that the filmmaker asks the audience not to reveal… so I won’t! The penultimate scene is obviously influenced by the films of Val Lewton and American film noir (which were both influenced by the French poetic realism films to begin with): full of chiaroscuro shadows, footfalls in the dark, a quiet sense of dread, followed by the shocking revelation. It is one of the scariest segments in horror, indeed in cinema as a whole, and not to be missed. 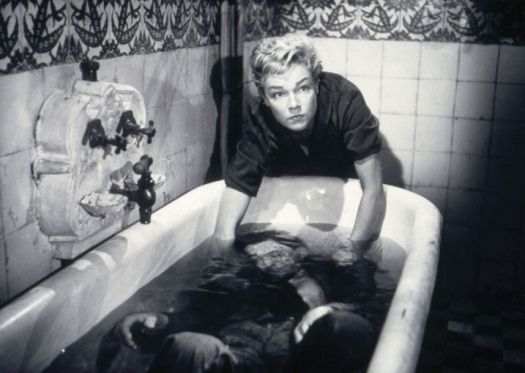 The performances are dead-on (pun intended), with Simone and Madame Clouzot at the top of their game. Charles Varel also shines in the pivotal role of a Columbo-like retired cop turned private detective, adding to the eeriness. DIABLOIQUE has been remade several times: Curtis Harrington’s 1967 GAMES (also with Signoret), a pair of TV Movies (1974’s REFLECTIONS OF MURDER, 1993’S HOUSE OF SECRETS), and a big budget 1996 version starring Sharon Stone and Isabelle Adjani (with Kathy Bates as the cop!) that failed miserably. None of these films can hold a candle to Clouzot’s dark, disturbing piece de resistance. There’s only one auteur who could’ve possibly handled this material with such style, and that would be Hitchcock. We can only wonder what that would be like, but we’ll never know. Instead, we’re left with Clouzot’s brilliant piece of film work, which we can certainly be grateful to have for Halloween (or any) season.