Stephen King turned 70 last month, and the Master of Horror’s grip on the American psyche is stronger than ever, thanks to the unprecedented horror hit IT!, now playing at a theater near you. King’s macabre novels have been adapted for the screen since 1976’s CARRIE with  varying degrees of success; some have been unabashed genre classics, others complete bombs, most lie somewhere in the middle.

Director John Carpenter had a string of successes beginning with 1978’s seminal slasher film HALLOWEEN, but his 1982 remake of THE THING, now considered a masterpiece of the genre, was a box office disappointment. Carpenter took on King’s novel CHRISTINE as a work-for-hire project. I recently watched it for the first time, and think not only is it one of the best adaptations of King’s work to hit the screen, it’s one of Carpenter’s best horror outings as well.

Nerdy Arnie Cunningham and his best friend, jock Dennis Guilder are your typical late 70’s high school students, obsessed with cars, sex, rock music, and football. Arnie is the target of school bully Buddy Repperton and his posse of thugs, who get suspended after pulling a switchblade on the poor sap. But things change for Arnie when he’s drawn to a battered old ’57 Plymouth Fury, nicknamed ‘Christine’, which he buys from its creepy owner, elderly George Lemay, who inherited the wreck when his brother committed suicide in it. 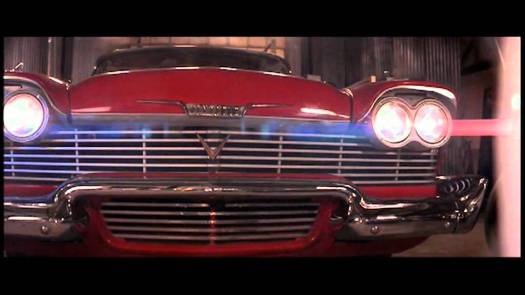 Soon a change comes over Arnie, as he spends all his time lovingly restoring “Christine” to her former glory. He starts gaining confidence, and soon is dating the hottest chick in school, Leigh Cabot. His appearance and attitude also begin to change, morphing into a 50’s-style JD greaser, complete with pompadour and leather jacket! Strange things begin to happen when ‘Christine’ is around: Dennis gets injured on the football field, and Leigh is trapped inside the car at a drive-in, choking on her burger! When Buddy and his bullies extract revenge by trashing ‘Christine’, smashing it with sledgehammers and taking a dump on the dash. But ‘Christine’ and Arnie have developed a psychic bond: he tells the auto “Show me”, and Christine herself morphs back to her old self, dead set on revenge…

CHRISTINE is a whole lotta fun, with some marvelous, murderous set pieces devised by Carpenter. King’s material and Carpenter’s style mesh perfectly, aided and abetted by Bill Phillips’ pedal to the metal script and Donald M. Morgan’s crisp photography. ‘Christine’ herself, according to carponents.com , was played by 23 different autos, including a couple of modified Plymouth Belvederes and Savoys, allowing Ted Allen, Roy Arbogast, and the rest of the special effects team to create their “twisted” regeneration scenes. The roaring engine sounds were actually dubbed from a 1970 Ford Mustang!

Carpenter peppers his score with snippets from classic 50’s artists to accentuate the mood, including Johnny Ace (“Pledging My Love”), Danny and the Juniors (“Rock and Roll is Here to Stay”), Dion and the Belmonts (“I Wonder Why”), Thurston Harris (“Little Bitty Pretty One”), Buddy Holly (“Not Fade Away”), Ritchie Valens (“Come On, Let’s Go”), Larry Williams (“Bony Maronie”), and Little Richard (“Keep A-Knockin'”). You’ll also hear ABBA, The Rolling Stones, George Thorogood, and Tanya Tucker on the soundtrack, just not on ‘Christine’s’ radio – she only plays 50’s rock! 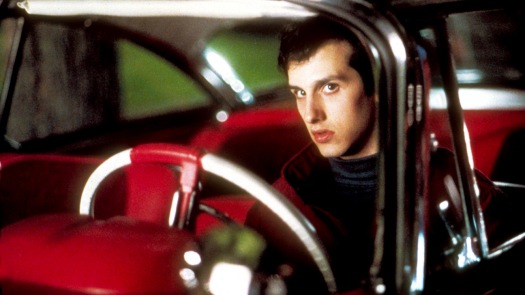 The cast was deliberately made up of at-the-time unknowns, chief among them Keith Gordon as the nebbish Arnie. Gordon went behind the cameras as a director of films (MOTHER NIGHT, WAKING THE DEAD) and television (DEXTER, HOMELAND). John Stockwell (Dennis) played in MY SCIENCE PROJECT and TOP GUN; he’s also a director today. Alexandra Paul (Leigh) is best known as Lt. Stephanie Holden on TV’s BAYWATCH. William Ostrander (Buddy), who looks like a cross between Jim Morrison and Vinnie Barbarino, later appeared in RED HEAT and MULLHOLLAND DRIVE. Oh, and speaking of Vinnie Barbarino, Kelly Preston has a role as hot-to-trot cheerleader Rosanne.

The adults in the cast include Robert Prosky as the gruff garage owner where ‘Christine’ is stored, Christine Belford as Arnie’s nagging mother, Roberts Blossom as the weirdo Lemay, and the late, great Harry Dean Stanton as State Police Detective Junkins, who’s investigating all the outlandish murders. CHRISTINE puts Stephen King and John Carpenter together for the first and only time, and it’s a match made in… well, you know! Add it to your Halloween viewing list, kick back, and enjoy the ride.