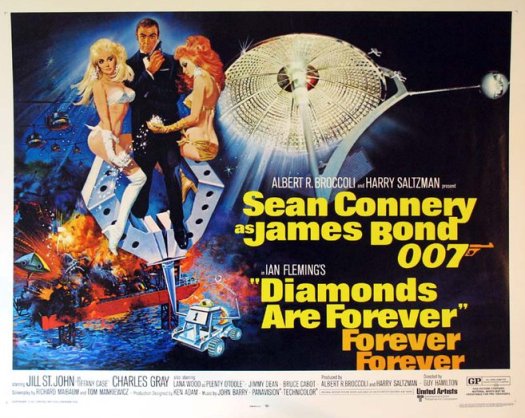 007 fans all over the world cheered when Sean Connery returned to the role that made him famous in DIAMONDS ARE FOREVER, the 6th James Bond screen outing. Connery left the series in 1967 (YOU ONLY LIVE TWICE), and was replaced by George Lazenby for 1969’s ON HER MAJESTY’S SECRET SERVICE. Lazenby was actually pretty good, if a bit boring, but he was one-and-done, choosing not to be typecast as cinema’s most famous spy (how’d that work out, George?). Producers Albert Broccoli and Harry Saltzman offered Connery an unprecedented $1.25 million dollars to come back, which the smart Scotsman snapped up in a heartbeat… who wouldn’t? Well, except for George Lazenby. 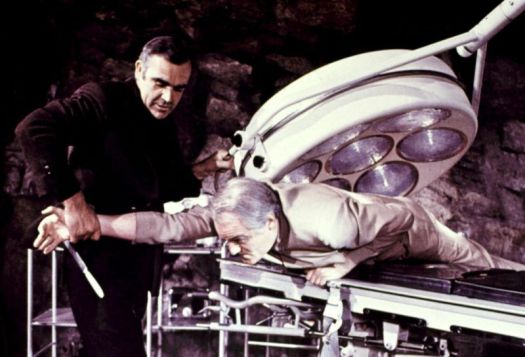 The opening sequence has Bond searching the globe to fins Ernst Stavro Blofeld, SPECTRE’s megalomanical leader who ordered the death of Bond’s wife in the previous movie. 007 hunts down his arch nemesis and ends his villainous career in grand fashion! Following Shirley Bassey’s bombastic theme song, we find Bond and M at a meeting with Sir Donald Munger, who’s concerned about a diamond smuggling ring that aims to flood the market and depress prices. Bond is sent to Holland to follow the money, and we’re introduced to the stunning but duplicitous Tiffany Case, played by the stunning Jill St. John ! And when I say stunning, I’m not kidding around: 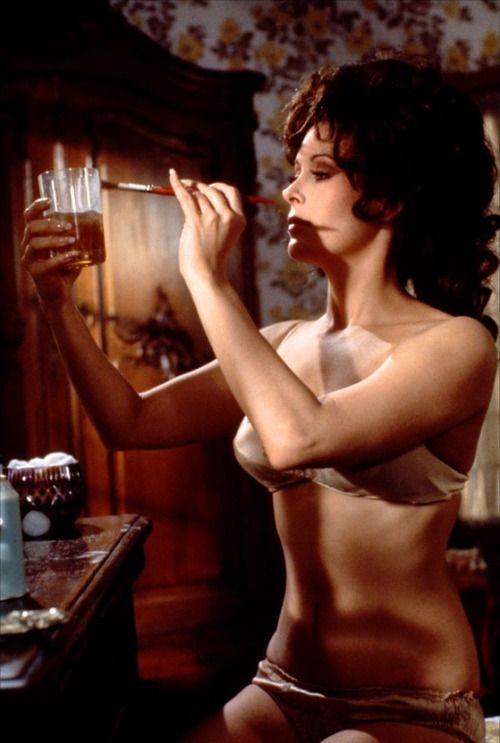 Jill was the first American Bond Girl – God bless America! Anyway, Bond follows the trail to glitzy Las Vegas, where he’s pitted against the Howard Hughes-esque Willard Whyte, mobsters, and an oddball pair of hitmen called Mr. Wint and Mr. Kidd, who leave a trail of bizarre murders wherever they pop up (and seem to be more than just business partners, but that’s none of my business!). Our Man Bond is in for a big surprise when he breaks in on Whyte’s top-of-the-world casino hideaway (which I won’t spoil for those who haven’t seen this one), and gets enmeshed in a deadly game of nuclear blackmail involving a satellite-stationed laser cannon, then an action-packed aerial assault on the bad guy’s oil rig base off the coast of sunny California!

Connery was now over 40, but still inhabits the role of James Bond like a custom fit tuxedo. He can be sometimes charming, sometimes vicious, with both the ladies and the bad guys, depending on what’s appropriate at the time. To me, Sean Connery was always the best of the Bonds, and even though DIAMONDS ARE FOREVER isn’t ranked high among many Bond fans, I find it a good, entertaining entry in the series. There’s plenty of great action scenes, like Bond’s daring escape from Whyte’s facility in a moon buggy across the Nevada desert, or the crazy cool car chase down the neon lit Vegas strip.

Did I mention how stunning Jill St. John is? I did? Ok, then let’s move on to the rest of the cast. Bernard Lee (M), Desmond Llewelyn (Q), and Lois Maxwell (Miss Moneypenny) are all back, and country singer Jimmy Dean (yeah, the sausage guy) plays the reclusive Willard Whyte. Charles Gray takes over the role of Ernst Stavro Blofeld this time around, and Lana Wood has a small part as casino shill Plenty O’Toole. Veteran bad guys Bruce Cabot , Marc Lawrence , and Sid Haig show up, as does deadpan comic Leonard Barr, uncle of another film superspy Dean Martin (the MATT HELM series). Mr. Wint and Mr. Kidd are portrayed by character actor Bruce Glover (father of Crispin) and noted jazz bassist Putter Smith, respectively.

Guy Hamilton also returned to the series to direct, and he stuck around to helm the next two, introducing Roger Moore to the Double-O club. Connery had his had fill, at least for the next twelve years, when he once again returned as Bond in NEVER SAY NEVER AGAIN. As for George Lazenby? The man who didn’t want to be typecast has pretty much made a career out of parodying his one shot at 007. But that’s okay; with DIAMONDS ARE FOREVER Sean Connery pretty much proved he’s the biggest (and best) Bond of ’em all!