Longtime readers of this blog know CASABLANCA is my all-time favorite film. It’s blend of stars, supporting cast, script, direction, drama, romance, and humor is the perfect example of 1940’s Hollywood storytelling,  when Tinseltown was at the peak of its moviemaking powers . I’ve seen the film at least 80 times in many different formats, from broadcast television to cable and satellite, from VHS to DVD to DVR, but never before on the big screen – until this past Sunday, that is! 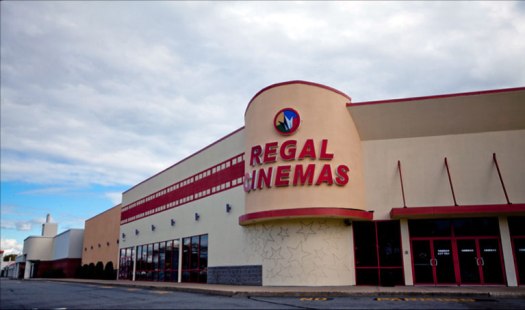 Fathom Events, in conjunction with TCM, presents classic films on a monthly basis in theaters across the country. In my area, they’re shown at Regal Cinemas in Swansea, MA, a half hour drive down the highway. I’ve been tempted to make the trip a few times, but never got around to it for one reason or another. But when I heard CASABLANCA was this month’s feature, I knew I had to be there, despite the drive, the multiple personal viewings (hell, I own it in two formats!), and the $12.50 ticket price (not to mention the requisite popcorn and soda!). This was an opportunity to see my favorite movie on a big screen, and I wasn’t about to pass it up!

Even though it was a Sunday afternoon during football season, a three-quarters full crowd gathered to attend the 2:00 showing. The fact that our Super Bowl Champion New England Patriots didn’t play hated rivals the Denver Broncos until 8:30PM certainly didn’t hurt matters (and by the way, we kicked their asses!).  The audience was a good mix of older viewers and, to the delight of my classic movie lovin’ heart, some younger fans, giving up their Sunday afternoon to watch a 75-year-old Black & White movie in a theater. Just goes to show what I’ve known all along – a great film will always draw an audience, no matter how old it may be. 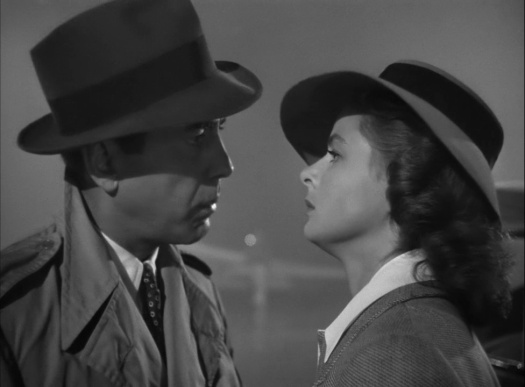 After a filmed introduction and some solid background info from TCM’s own Ben Mankiewicz, it was showtime. Seeing this film up there larger than life was an awesome experience for yours truly, even though I know it by heart and can recite the dialog like singing along to an old song on the local classic rock radio station. Every line on Bogart’s world-weary face was there, all the pain and self-pity indelibly etched in vivid detail when Rick Blaine meets up with his long-lost love Ilsa Lund, now accompanied by Czechoslovakian freedom fighter Victor Laszlo. The scene where Rick, drinking himself to oblivion in the darkened Café Americain, orders his piano playing friend Sam to play “As Time Goes By”, stirring memories of his and Ilsa’s affair in Paris before the Nazis marched in, brought tears to even the most jaded of eyes – including my own. I guess Captain Renault would label me a “sentimentalist”, too!

Ingrid Bergman looked beyond beautiful on the big screen, her dewy-eyed, ethereal face conveying powerful emotions boiling just under the surface. Paul Henreid looked more heroic than ever as Victor Laszlo, especially during the inspirational scene where he leads the patrons of Rick’s in “La Marseillaise”:

Claude Rains  as Captain Renault gets most of the best lines, and got the biggest laughs from the crowd, including that “I’m shocked – shocked to find that gambling is going on here” one. The diminutive Rains dominated every scene he was in, and very nearly steals the picture from the Bogart/Bergman/Henreid triangle with his acting skills. S.Z. “Cuddles” Sakall as Karl got his share of laughs, too, whether looking at Rick all googly-eyed after the boss allows a young refuge couple to win at roulette, or the charming scene he shares with Mr. and Mrs. Leuchtag (Ludwig Stossel, Ilka Gruning) as they demonstrate their command of the English language – or rather lack of it! 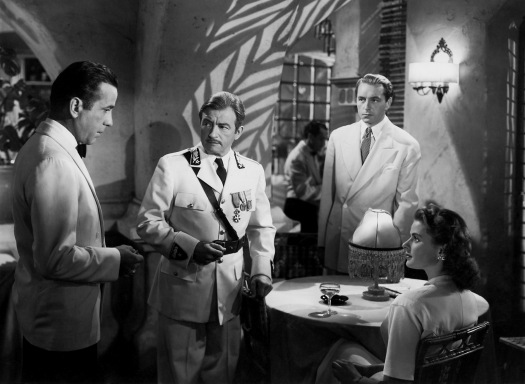 Dooley Wilson has never sounded better, and his musical interludes on “It Had to Be You” and “Knock On Wood” felt like a live concert event, surpassed only by the iconic song “As Time Goes By”. Peter Lorre , Sydney Greenstreet, Conrad Veidt – such an amazing cast! And being the inveterate Familiar Face spotter that I am, it took all my strength not to shout out the names of the character actors who pop up in scene after scene (Frank Lackteen! Dan Seymour! Madeleine LeBeau! Gino Corrado!), many of whom were real-life refugees who escaped the Nazi terror in Europe and came to America to ply their trade.

All in all, celebrating CASABLANCA’s 75th Anniversary on the big screen was a dream come true, and an experience I’ll not soon forget. The perfect film in the perfect venue, surrounded by like-minded fans – I couldn’t ask for a better way to spend a Sunday afternoon. I could go on and on, but instead I’ll let the great Dooley Wilson take this post home. Play it, Sam:

18 Replies to “Here’s Looking at You On The Big Screen, CASABLANCA!”