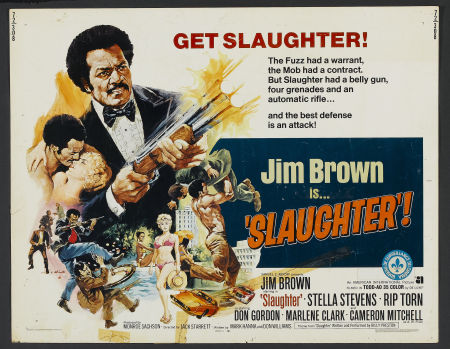 Jim Brown  is one bad mother… no wait, that’s Richard Roundtree as Shaft! Jim Brown is one bad dude as SLAUGHTER, a 1972 Blaxploitation revenge yarn chock full of action. Brown’s imposing physical presence dominates the film, and he doesn’t have to do much in the acting department, ’cause Shakespeare this ain’t – it’s a balls to the wall, slam-bang flick courtesy of action specialist Jack Starrett (RUN ANGEL RUN, CLEOPATRA JONES , RACE WITH THE DEVIL) that doesn’t let up until the last second, resulting in one of the genre’s best.

Ex-Green Beret Slaughter (no first name given) is determined to get the bad guys who blew up his dad’s car, with dad in it! Seems dear ol’ dad was mob connected and knew too much. Slaughter’s reckless abandon in seeking revenge lands him in hot water with Treasury agents, and he’s “persuaded” to assist them in taking down the Mafiosos, who’re using a high-tech “supercomputer” to run their illegal enterprises. He’s assigned two handlers, gorgeous but icy Kim and goofy but competent Harry, and flown to an unspecified South American country that looks suspiciously like Mexico City (where most of the movie was shot). 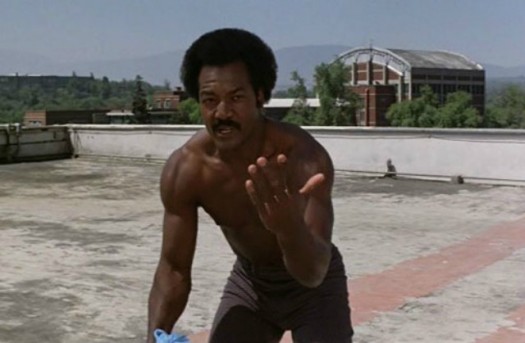 Mafia Don Mario Felice is level-headed, while his capo Dominic Hoffo is a stone cold killer. There’s tension between the two, especially after Felice sends Hoffo’s sexy goomah Ann to spy on Slaughter – and she winds up falling under his sexual spell! There’s plenty of action and a high body count ahead as Slaughter pummels, shoots, and jive talks his way through the movie like the proverbial bull in a china shop, right up until the obligatory car chase ending, which is particularly well-edited by AIP stalwart Renn Reynolds (PSYCH-OUT, THE SAVAGE SEVEN).

Brown is in control as the title character, commanding the film with his macho charisma. He’s kind of like a Blaxploitation Bond, only with no boundaries whatsoever. The always reliable Don Gordon plays sidekick Harry, and delivers some much needed comic relief to all the badassery happening. Stella Stevens as Ann parading around in a skimpy bikini (and less!!) is definitely a highlight, and her sex scenes with Brown torch the screen. Rip Torn shows restraint as Hoffo, until the point where, in a jealous rage, he brutally beats the holy fuck out of Stella. That scene is not for the squeamish! Cameron Mitchell has what amounts to a cameo as the T-Man in charge of the operation, and Marlene Clark (GANJA AND HESS, SWITCHBLADE SISTERS) is given next to nothing to do as agent Kim.

Composer Luchi De Jesus adds a funky music score, as he did for DETROIT 9000, BLACK BELT JONES , and FRIDAY FOSTER. Yes, there is a theme song, this one by the great Billy Preston (later used in Tarantino’s INGLOURIOUS BASTERDS), which I’ll leave you with as I search for more bodacious Blaxploitation movies for your edification and enlightenment. Take it away, Billy: