CASABLANCA was released seventy-five years ago on November 26, and The Cult of Casablanca is stronger than ever! The film resonates with young and old alike in its themes of lost love, redemption, and answering to a higher moral authority. Noah Isenberg’s latest book, WE’LL ALWAYS HAVE CASABLANCA: THE LIFE, LEGEND, AND AFTERLIFE OF HOLLYWOOD’S MOST BELOVED MOVIE, takes a look behind the Silver Screen to track the history of the film  from its beginnings through its continuing popularity today.

Isenberg, a professor of film studies at The New School and author of the definitive EDGAR G. ULMER: A FILMMAKER AT THE MARGINS (2014), gives the reader a three-pronged look at the film. In the first, he meticulously delineates the screenplay’s roots, from its birth as the play Everybody Comes to Rick’s by Murray Burnett and Joan Alison, to the adaptation by brothers Julius and Philip Epstein, to the contributions of writers Howard Koch and Casey Robinson. All this is carefully researched by Isenberg through interviews and the Warner Brothers archives, unearthing the correspondence of producer Hal Wallis and studio chiefs Jack and Harry Warner, among others. 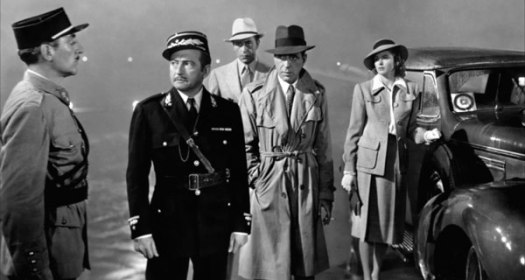 The second prong deals with the  film’s memorable cast and crew. Yes, the big names are all there – Bogie, Bergman, Henreid, director Michael Curtiz, composer Max Steiner – but Isenberg also shines the spotlight of many of the smaller players, most of whom were refugees from war-torn Europe. Though these actors were big names themselves in their respective native countries, the majority of them were reduced to being bit players in Hollywood, a fact that made them feel as if they’d turned from “St. Bernards to Dachshunds”. The plight of actors Curt Bois, Marcel Dalio, Lotte Palfi, and Hans von Twardowski, forced out of the limelight by circumstance and into lesser, sometimes uncredited roles, caused much bitterness among these talented strangers in a strange land.

Finally, Isenberg takes us to the CASABLANCA phenomenon, starting shortly after the death of Humphrey Bogart. Revival houses like The Brattle in Cambridge, MA brought the film a new, college age audience in the late 50’s. It’s anti-authoritarian stance and theme of fighting for a just cause also  resonated with the 60’s counterculture movement, and of course the film’s romanticism played a large part in that. Isenberg looks at the movie’s lasting impact in pop culture, even today, and discusses several critical points of view, not all of which are favorable (which is sacrilegious far as I’m concerned!).

WE’LL ALWAYS HAVE CASABLANCA is a surprisingly easy read. Only the arms of Morpheus prevented me from finishing it in one sitting. Then again, you know what a huge CASABLANCA buff I am! Even if you’re not as obsessive about the movie as me, if you’re a classic film buff (and I assume most of you reading this blog are) the book is a fascinating look at Hollywood filmmaking in the 40’s, when the studio dream factories were in their glory. I highly recommend it to those of you interested in movie history – in fact, it would make the perfect Christmas gift for the film fan in your life!.

Top Ten Reasons CASABLANCA is The Greatest Movie Ever Made!!

Here’s Looking at You On The Big Screen, CASABLANCA!