Roger Corman  kicked off the outlaw biker film genre with THE WILD ANGELS, setting the template for all biker flicks to come. Sure, there had been motorcycle movies before: Marlon Brando in THE WILD ONE and the low-budget MOTORCYCLE GANG spring to mind. But THE WILD ANGELS busted open box offices on the Grindhouse and Drive-In circuits, and soon an army of outlaw bikers roared into a theater near you! There was BORN LOSERS , DEVIL’S ANGELS, THE GLORY STOMPERS , REBEL ROUSERS, ANGELS FROM HELL, and dozens more straight into the mid-70’s, when the cycle cycle revved its last rev. But Corman’s saga of the freewheeling Angels  was there first; as always, Rapid Roger was the leader of the pack.

Our movie begins with the classic fuzz-tone guitar sound of Davie Allen, as Angels president Heavenly Blues (Peter Fonda ) rolls down the road to pick up club member Loser (Bruce Dern ). The two then gather up the club and ride to the desert town of Mecca, where a Mexican gang have Loser’s stolen chopper. A fight breaks out, the ‘man’ comes, and the Angels take off, with Loser stealing a cop’s bike to join them. He’s shot in the back while riding away, and the cops take him to the hospital under armed guard. Loser’s ‘old lady’ Gaysh (Diane Ladd ) is worried, but Blues has a plan to “bust him out”, using his girl Mike (Nancy Sinatra) as a decoy. The club brings Loser home, but he soon dies, right after toking his last jay. The club then takes his body to his hometown for an Angles style send-off, a wild Bacchanalia of desecration, degradation, destruction, and decadence….

That’s about all the plot there is, a loose frame to hang some scenes of sex, drugs, violence, and the Angels cruising down the highways. Biker flicks were never meant to be plot-heavy; they serve to show the nihilistic viewpoint of an alienated part of our culture, who reject (and are rejected by) conventional society and form their own “family” units. It’s a theme as old as mankind itself, and Fonda sums it up best:

Right up there with his dad’s speech in THE GRAPES OF WRATH! Notice none of the actors are wearing any “official” Hell’s Angels colors, patches, or rockers. That’s because the real club (some of whose Venice chapter appear in the film) don’t allow it… Bruce Dern alleges he copped a beating for doing so, despite the fact his character was already dead! 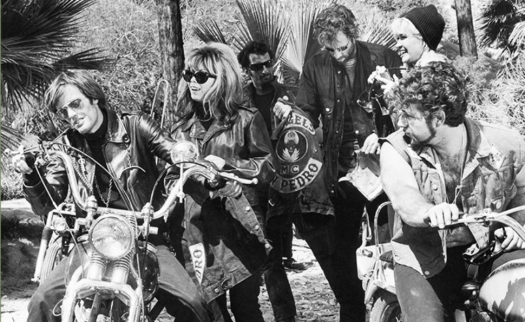 Besides those mentioned, the cast features Buck Taylor , Norman Alden, Michael J. Pollard, Lou Procopio, and Marc Cavell as club members, along with Familiar Faces Art Baker , Kim Hamilton, Gayle Hunnicut, Frank Maxwell (as the preacher), Dick Miller (naturally!) , Barboura Morris, and veteran tough chick Joan Shawlee as Momma Monahan. Charles B. Griffith wrote the script, which Corman hated, so he gave it to his assistant Peter Bogdanovich for a complete rewrite! Bogdanovich did so without credit, also working on some second unit directing, cinematography, editing, and even playing a bit part in the final fight scene at Loser’s gravesite! THE WILD ANGLES is as much Bogdanovich’s film as it is Corman’s, and the work he did for Roger helped launch his own career as a filmmaker. Those of you who dig biker exploitation will surely dig THE WILD ANGELS. Those who don’t… well, you’re just too square, man. 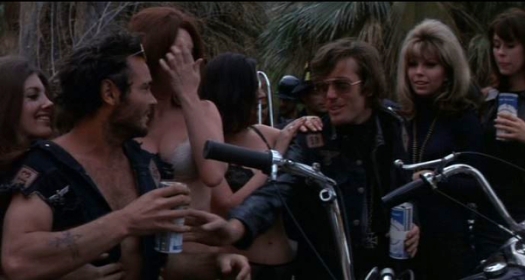